GRASS ROOTS and My Village 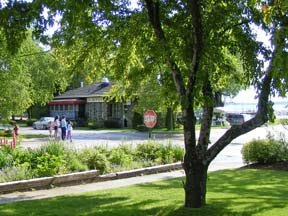 I live out in the country but spend my days in the village of Northport, doing my daily errands on foot, taking breaks from the bookstore to walk my dog, seeing friends all the time. Here is a family taking advantage of our sunny Friday morning to head down to the marina park. We’re all very fortunate not only to be in a village but in friendly, convenient and pretty little Northport.

Following up on a comment from Susan Och the other day, I began reading Freeman Tilden’s book on our state park system and learned that the vision for a nationwide system of state parks came about in 1921, in part as a result of pressure on the national park system. One aim was to provide campgrounds for motorists. Another was ‘recreation,’ a vague term Tilden thinks needs not be defined, saying, “I will gladly dispense with definitions in exchange for more good public reserves where the thing itself may be found” (THE STATE PARKS: THEIR MEANING IN AMERICAN LIFE [Knopf, 1962]). In some parks ‘recreation’ is fishing, boating and so forth; others emphasize history; the reason for still others is preserving tracts of wilderness. ‘Recreation,’ like beauty, is in the eye of the beholder.

We are fortunate to have both Leelanau State Park and Sleeping Bear National Lakeshore in our county, along with a growing number of public access trails maintained by the Leelanau Conservancy, but I’m thinking that Susan’s focus, really, is more on the township and village level, and I found a book much more general in nature, addressing questions far beyond ‘recreation,’ that may help her and the rest of us think about what kind of future we would like to see here on our home grounds. Paul Gruchow’s GRASS ROOTS: THE UNIVERSE OF HOME (Milkweed Editions, 1995) starts off like many a book on rural meditations, though he addresses more directly objections that he is appealing to ‘nostalgia’ or ‘romantic’ notions. ‘Nostalgia’ originally meant homesickness, he tells us, and the broad notion of a ‘romantic’ life is that it is lived with principles. The history of his growing-up and of his small Minnesota township make for interesting reading. It is, however, 80-some pages into the book that he develops ideas I see as relevant for talk of “Future by Design,” especially if we aren’t just talking about “streetscapes” for our villages but thriving, full-service communities providing employment for young families.

“What We Teach Rural Children” is a chapter to open the eyes and straighten the back of any reader with a concern for education and the future of farming and rural communities. Here are some of the lessons he says we teach, albeit inadvertently: that industrialization is an escape from hard labor on the land; that to have any kind of meaningful future, young people must migrate to cities; that any professional person who returns to a small town practice must not be very good at what he or she does. The following chapter, “Guerilla Warfare,” continues these themes with specific ideas of what will not work and what might, all guided by the author’s basic insight, which is so important that I want to quote him at length in a separate paragraph:

“Moral arguments carry persuasive weight to the extent that they appeal to the good of the whole community. The task in moral terms is not to benefit farmers but to benefit society as a whole. The strongest moral argument against our present system of agriculture [which has been bled dry of the ‘culture’ that farming used to possess, as he argues earlier in the book] is not that it hurts individual farmers—although it does—but that it tends toward totalitarianism: the system concentrates wealth and power to the disadvantage of most citizens, urban as well as rural, and does so at an accelerating pace. In a food system increasingly dominated, as ours is, by transnational conglomerates with economic monopolies, urban consumers have few meaningful choices about what they will eat and whom they will support with their food dollars; rural producers have fewer choices about what they will grow, how it will be grown, and where it will be marketed; and urban and rural communities alike lose power to influence businesses to make decisions that work to the general social, environmental and economic good.”

Gruchow thinks a frontal assault on this well-entrenched system of corporate production and marketing is unlikely to succeed. His vision instead is that of growing local alternatives to render what he sees as a “totalitarian” system “irrelevant.”

Farm markets, CSA’s and home gardens are in this sense “guerilla” tactics, and Gruchow has others. The last of his twelve numbered points harks back to the previous chapter: “We could teach our children rural history and rural culture.” Not, however, I want to urge, as something quaint and over-and-done-with but as something kept alive by some, revitalized by others, and valuable to all of us. 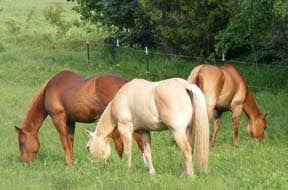 As I was coming into town this morning, I saw two young girls crossing the road to the horse farm. I thought about Jacob, home from college for the summer to work on cherry harvest. I remembered my grandmother’s flock of chickens and her milk cow, my grandfather’s raspberry patch and kitchen garden, my other grandfather’s pride in his backyard tomatoes, the way my mother pinned sheets to the backyard clothesline. I want to honor this way of life and continue to incorporate it into my own. This is how, Gruchow says, we have a home, a history, a culture.

Late afternoon postscript: Having come to the end of the book GRASS ROOTS, I want to say just a bit more about it. The passage I quoted four paragraphs up is typical of one of his styles. The book in its entirety, though, has at least four styles, and Gruchow's meandering but purposeful narrative--a footpath, not an expressway--takes the reader from Memory through Ideas and Strategies, finally to Poetry. The poetry of the final chapter will, I'm sure, trigger memories in readers' minds, as it did in mine, taking us back to the beginning of the path again. For each of us, then, our memories should generate our ideas and strategies and poetry. This is a gem of a book.
Posted by P. J. Grath at 8:46 AM