There’s nothing else in the world to compare with Northport graduation. Last year’s class was a big one, 23 graduates. This year’s Class of 2008, by contrast, was 11 strong--six handsome young men and five beautiful young women. It seems such a short time ago they were goofy, adorable little grade school kids. Now they’re going out into the world on their own.

What makes graduation different in Northport? 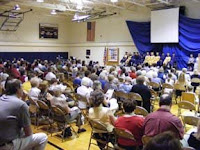 Like almost everything else, it’s a community event. With such small classes, there’s no need to restrict seating to family only; instead, anyone is welcome. Because the school is right in the village (up the hill from “downtown”), everyone knows at least some of the graduates, kids who have been playing and walking and, more recently, driving and working in town for years. They have made their mark on all of us. As Barbara McCann said, in her commencement address, here in Northport, “It takes a child to raise a village,” and all these kids have made contributions to our village life. 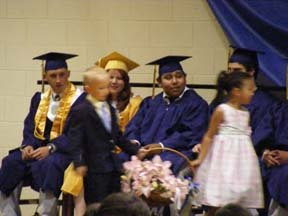 Since the whole K-12 school is small, young children are involved in Northport graduation, too. This year the second- and third-graders sang the national anthem at the beginning of the ceremonies. Later, little Minaal Campos and Logan Adams were the flower-bearers, handing each graduate a pink Asiatic lily from the basket they carried. (Graduates presented their parents with white gerbera daisies.) Young barefoot girls in the bleachers behind my seat (high enough to get good pictures, at the end of the row by the door where there was a nice breeze) scrambled up and down from time to time to get a closer view. Maybe they were imagining their own distant graduation evening.

Each year the graduates, many of whom have known each other since kindergarten, say how close they are as a group. Remember, we’re not talking about a class of 1200-1500 kids but a class of eleven. In a larger school, any student might have ten close friends. That group of friends, however, would probably be quite similar in terms of ethnic background, family income, academic achievement, extracurricular interests, future aspirations, etc. In a small school, the potential friendship pool is limited, and an entirely different dynamic is at work. Some people think only large schools can prepare young people for the “real world,” but most adults don’t get to select every individual in their work group or neighborhood, and a small school is solid preparation for learning to get along and work together as a team with different people. “We’re like a family,” the graduates always say. 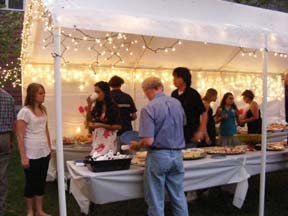 After the ceremony, after all the graduates had been hugged in the reception line by half the town, people started strolling downhill to the first of several weekend graduation parties. Yes, on a beautiful June evening (thunderstorms and tornadoes alike non-events, to everyone's great relief) we could walk up to the school and walk down to the first party afterward, where some of the 2007 graduates, back in town for the summer or at least for a visit, had tales of their first year away at college. Here in Northport, you can come home again.

So today, hats off to the Northport Class of 2008—

We wish you all future success and happiness! And keep us in your hearts, as we will keep you in ours. 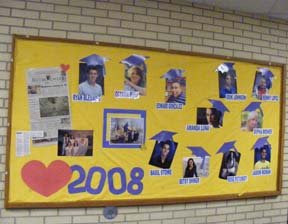