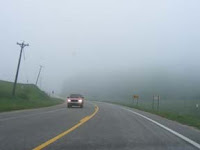 Many readers and travelers asked to respond with a word association to the cue “fog” would probably say “London.” On my only (brief) visit to London, there was no fog except in my brain, as I tried to find my way around. Truth is, my mind hears or thinks “London” and leaps across the Channel (la Manche, s’il vous plait) faster than you can say, “Bleu, blanc et rouge.” So here on this foggy morning I’d like to indulge myself by writing about my favorite three Paris books.

One is Eliot Paul’s THE LAST TIME I SAW PARIS. Set in the heart-breaking period between the two world wars, it lulls the reader at the beginning with eccentric but cozy stories of people living and working in the neighborhood of the famous, tiny Rue du Chat Qui Pêche. Gradually, however, tension creeps in. Frugality is no defense against rampant inflation, and some of the desperate or just plain angry respond to the financial situation with political extremism. Names are called, rumors spread. The book closes with the author’s departure for home (U.S.), and the reader knows the Occupation is at hand. The book is an intimate look at a small neighborhood, as well as a microcosmic view of French life in the time leading up to World War II.

THE HORRORS OF LOVE, by Jean Dutourd, is an entirely different kettle of fish. If you’ve seen the film “My Dinner with Andre,” you have a template for THE HORRORS OF LOVE. The entire novel is a conversation between two men. They sit in restaurants and cafes, they stroll about the city, and all the time one character is telling the other, a writer, a story he thinks would make a wonderful tragic novel. The writer needs convincing: he had some acquaintance with the politician in question and his wife and does not initially believe their story reaches the stature of tragedy. We meet an entire cast of characters only through the two characters in dialogue. The book is a tour de force. And the story could not take place anywhere but in Paris.

Finally, there is Adam Gopnik’s PARIS TO THE MOON, a collection of essays published in THE NEW YORKER magazine when Gopnik was living and writing in Paris. His older child went to school with Parisian children, his younger was born in the city. But this isn’t what makes Gopnik’s writing so special. First, there is his broad general knowledge and a brilliant ability to make connections, qualities necessary to any essayist. Along with these--and a style full of delightful surprises without ever being annoyingly experimental--he has the natural curiosity of a real, honest-to-God traveler. Not content to remain on the beaten path, Gopnik searches out and discovers Paris “insolite,” the offbeat and quirky corners, and we his readers reap all the benefit.

It’s pouring rain now in Northport (almost noon), reminding me of how many cool, rainy days springtime in Paris actually brings. The French have a saying, “All bad things come from England.” They like to say how terrible London weather is, neglecting to mention that Paris will have that same weather in short order. It doesn’t matter. When it rains, you go inside the café, you visit a museum, browse around a bookstore, whatever. You’re in Paris! Or in Northport!
Posted by P. J. Grath at 5:26 AM

I've spent several months in London and never saw a fog like the one that rolled in Sunday morning as I was preparing to leave Northport. After all the Hammer horror movies I watched as a kid, that's a little disappointing.

I must be too materialistic. I much prefer London over Paris. Good London books are "London: the Biography" by Peter Ackroyd (His "Shakespeare: the Biography" also features Elizabethan London in a major supporting role), "Lights Out for the Territory" by Iain Sinclair, and the best Dickens book featuring London, "Bleak House."

Thanks for the London book tips. The word "bleak" does suggest a certain--but oh, well, everyone has a different magic city. For one of my sisters, it's New York, for a couple of friends, it's Venice. George Orwell's DOWN AND OUT IN PARIS AND LONDON captured quite a contrast for me (not that I can compare fairly, having spent two days in London once and many months overall in Paris): the dirt and slavery of the Paris restaurant kitchens, with one night off a week to get drunk on red wine, vs. the line of grey men on the dole, trudging from town to town, buying their nights of shelter by giving over their meager possessions as collateral and promising to be gone in the morning. But, as I say, I am biased.

It's probably not fair to judge London by it's Victorian and Post-War image. Modern London was, of course, given a dose of involuntary urban renewal in the 1940s and Britain was pretty much exhausted by WWII. But since the end of the Age of Thatcher it's more "Cool Britannia" than Dickensiana.

As you say, different strokes for different folks. It's the feeling of accumulated and unmediated history (of both the regular and literary kind) that I like in London. There is no city better for aimless wandering, stumbling through alleys (whether before or after a pint or two), exploring the Underground, and observing the small details. As Samuel Johnson famously said, "when a man is tired of London, he is tired of life; for there is in London all that life can afford."