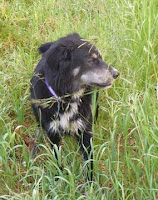 I ordered MERLE’S DOOR: LESSONS FROM A FREE-THINKING DOG, by Ted Kerasote, when it first came out and had it for sale with other dog books in my store, but it took me until now to read it. You see, our household is a Cesar Millan fan club. We believe with Cesar that dogs without “boundaries, rules, limitations” (that is to say, dogs without manners), not welcome in social settings beyond their own permissive families, tend to become isolated and unhappy, their problems intensifying. We believe that by showing his human clients how to work with the dogs, Cesar makes the world a better place for dogs and humans alike, “one balanced dog at a time.” So I was apprehensive that the “free-thinking” dog, who lived with his owner on a basis of equality rather than submission, would challenge and refute Cesar’s way. Or, I should say, that his owner would.

Emotionally, though, Kerasote won me over from the start when, recounting their first meeting and without being in any way cloying about it, he put words into the stray dog’s mouth: “You need a dog, and I’m it.” Nikki said that to me in 1993, Sarah in January of this year. (Both times I already knew I needed a dog.) The meeting rang true, and I believed every word of the book from then on. By the time the writer decided to make Merle his own door so the dog could come and go as he pleased, day or night, man and dog had pretty much already established a relationship of respectful, loving equality. They were fortunate to live in a near-wilderness area in Wyoming, a loosely knit, freedom-loving community where all the dogs ran free. It wasn’t Los Angeles, and it wasn’t suburban anywhere.

In fact, communication between Ted and Merle recalled doubts and reservations I had years ago when reading ADAM’S TASK: CALLING ANIMALS BY NAME, by philosopher-trainer Vicki Hearne, a writer and thinker whose work I admired but found somewhat rigidly authoritarian. Is training really, as she claimed in that book, the only possible way humans can communicate with other animals? They must learn our language or we have no basis for a relationship? I’m re-reading Hearne, more alive to her nuances, but my point here is that Kerasote learned Merle’s language (to the extent he was able) as much as Merle learned his. This is not at all a story of colonial (species) imperialism. Neither is it a dog training manual or a textbook on canine behavior, though many outside sources are cited, and the scientific material is well integrated with the story of Merle. Fundamentally, it is a joint biography-memoir. It is a memoir of the time in Kerasote’s life that he lived with the very particular, individual dog, Merle. It is also Merle's biography, authored by Ted.

Sharing home, friends and adventures, Ted and Merle usually understood each other, and when they didn’t, they tried. Ted realized early on that, other than himself, everything important to Merle was outdoors. Merle didn’t watch television or read books: he read the natural world (the Book of Nature, as older eras called it), and keeping him from that world was like withholding his library privileges. Merle did have boundaries and limitations: Ted taught him not to run cattle; he learned on his own that bison were not to be messed with; when they visited the city, Merle was walked on a leash. But basically Merle was a intelligent dog whose natural good manners were guided, when necessary, by a loving friend. 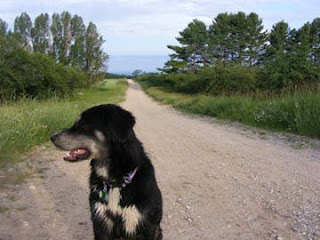 Anyone who has lived with and loved a dog will love this book (no one who is not a dog person will get it at all), and for my part I’ve reconciled Ted’s way with Cesar’s way. Our Sarah has less freedom than Merle but more than the dogs of suburban L.A. When she goes outdoors at home, we go together, and she doesn’t need a leash. We range widely over field and orchard and through the woods, and she loves it when we visit the neighbors, all the dogs playing together, rough and tumble. In Northport, when we walk around town, she’s on a lead, for safety’s sake, while in the bookstore, her degree of freedom varies with her energy level and attention to decorum, but mostly she’s unleashed except when she gets too rambunctious and needs calming. It’s a long day for a not-quite-10-month-old puppy, but she’s amazingly patient (many people are astonished to find out how young she is), knowing we’ll have a good time outdoors at home after dinner.

Does the book have a sad ending? We usually do outlive our dogs, after all, but Merle’s life was rich and full. He had maximum freedom and knew maximum love. And that thought led me to see a similarity in Ted’s way with Merle and Cesar’s way with “problem” dogs and their owners. Both of them understand that having a dog means being in a relationship and that any relationship requires time and attention.

It’s a big commitment, responding in the affirmative when a dog says, “You need a dog, and I’m it.” But sometimes they know things we don’t know, things we need to learn. 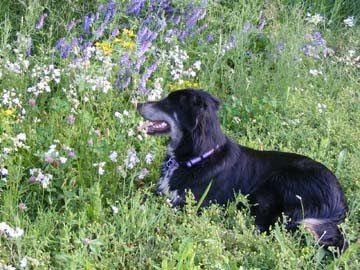 (All these pictures are of Sarah, taken this morning.)
Posted by P. J. Grath at 5:48 AM

Lucky Sarah! I've about decided that I'm a poor dog owner. I can't imagine Miss Sadie and the Cowboy behaving the way English dogs do. Actually, I had Miss Sadie part way there, but once the Cowboy joined the mix, all bets were off.

You say "Lucky Sarah!" but Sarah might say "Lucky Sadie and Cowboy!" She'd love to have another dog in the household. Or a couple of children. When a family with small kids comes in the bookstore, she becomes almost as animated as when one of her dog friends visits or when we visit the neighbors who have three dogs lucky enough to live together. But maybe the whole "The grass is greener" symdrome is more human than canine. I hope so, for their sakes.