Dream Day in the Bookstore

Once in a while, along comes a day in my bookstore that is like a day in someone’s dream of having a bookstore. Saturday was like that.

Morning brought out-of-town book customers, including children who enjoyed commanding Sarah through her paces for treats, and then an impromptu salon, of which the topic was Leland history, special focus: Fishtown. Susan Cordes usually stops in on Saturday mornings to pick up a book order, have coffee with me and discuss our respective dogs. Susan lives in Northport now and is a school board member but grew up in Leland (her family owners of the Leland Mercantile) and graduated from St. Mary’s School in Lake Leelanau before going on to a teaching career. Yesterday while she was here, along came Amanda Holmes and Dan Stewart. Holmes, author of the award-winning Omena history, OMENA: A PLACE IN TIME, is now administrative director (or something like that) of Fishtown Preservation, a huge job but one for which she is ideally qualified, with a Ph.D. in folklore and natural gifts of diplomacy and charm. Finally, completing the circle, arriving so fortuitously his entrance seemed almost on cue, came Nick Lederle, year-round Fishtown resident. “My house,” he says proudly of his remodeled two-story fish shanty across the river from the Cove restaurant, “is the most photographed house in Leelanau County.” Nick Lederle and Susan Cordes are cousins, members of families going back four generations in Leland. Amanda could hardly take notes fast enough! David and I had been telling her for months that she had to meet Nick, but this was the first time they’d gotten together. And it happened in Northport! (“The gym’s neutral territory!” cries a character in the musical “West Side Story.”) Well, that was a great session. 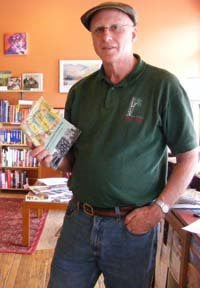 As the satisfied Fishtown discussion group filed out the door, I was happy to greet an old friend coming in. It was Richard Fidler, whom I first met when he visited my Traverse City bookstore on Union Street in 1994. Retired now from teaching, Richard has turned his scientific research mind to the study of local history, and the Grand Traverse Pioneer and Historical Society has published his book, GLIMPSES OF GRAND TRAVERSE PAST: REFLECTIONS ON A LOCAL HISTORY. Richard’s book has a great cover design and wonderful photographs, and I was drawn into the stories as soon as the book was in my hands. I still haven’t come to the part explaining the saying “A view of the bay is worth half the pay,” and Richard was surprised I didn’t know the old white oak on Washington Street, but I look forward to reading every word of GLIMPSES. 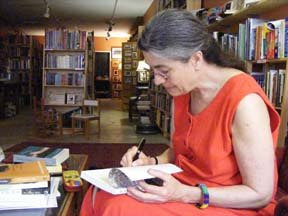 It was three o’clock, but the literary day wasn’t over yet. Before the end of the afternoon came a rare visit from author Stephanie Mills, of whom Jim Harrison wrote (for the cover of her most recent book, TOUGH LITTLE BEAUTIES), “Stephanie Mills has always been on the cutting edge…as one of our leading social critics.” I was honored that a highly self-aware environmentalist like Stephanie would drive to Northport to bring me a selection of her books, two of them newly reprinted by New Catalyst Books. TURNING AWAY FROM TECHNOLOGY: A NEW VISION FOR THE 21ST CENTURY, a book edited by Mills, with contributions from Wendell Berry and Susan Griffin, among others, is one I hadn’t had before and am glad to have in the bookstore now. WHATEVER HAPPENED TO ECOLOGY? (1989); IN THE SERVICE OF THE WILD: RESTORING AND REINHABITING DAMAGED LAND (1995); and EPICUREAN SIMPLICITY (2002) are also now available again at Dog Ears Books. We were enjoying our conversation so much, I stayed half an hour later than usual, and we promised each other another visit soon. This picture of Stephanie Mills shows her signing books with the fountain pen she calls her “word processor.” Does she have a computer? We’ll save that revelation for a later post.

A few years back, I had a call from an instructor at the Interlochen Arts Academy. Easter vacation was coming up, but some of the international students were staying on campus, and this instructor was putting together a holiday field trip for them. Would I be open on Sunday? Well, not usually, except between Memorial Day and Labor Day. How about Monday? No, that year I was taking both Sundays and Mondays off, and Bruce was still at his Florida winter home. The man on the other end of the line sounded so disappointed that it struck me that David and I had no real plans for the day. “Sure!” I told him impulsively. “I’ll be here on Sunday for you.”

The students came on Easter Sunday. The day was sunny, and I made lots of coffee and put out bowls of jellybeans, mixed flavors. We had the radio tuned to the Interlochen station, which pleased the students, who lolled about in the leather chairs and on the floor, petting our old dog, sight-singing from sheet music, and showing each other passages in books they’d found. Everyone was relaxed and happy, especially me. At last, after a couple of the most fulfilling hours I’ve ever had in my own bookstore, they lined up with their purchases and thanked me for being there.

Such are examples of bookstore dream days. But here’s the thing—you never know when one will come along. Another thing—besides the whole dream days, there are dream hours and dream encounters, and any day the bookstore is open, the dream may suddenly spring to life. A book-lover from Chicago, writers from Woodstock, a librarian from Portage or Ann Arbor, poets from here and there, kids who love books and dogs, men and women eager to share with me the names of their favorite authors—the list could go on forever. Old friends, new acquaintances, regulars and one-time visitors: who will walk in the door next? Of my bookstore and David’s gallery, we like to say, when musing on what a day will bring, “You never know.”

Today it’s raining, and the streets of Northport are pretty empty, but you never know….
Posted by P. J. Grath at 10:23 AM

Hi,
I would like to send you a readers copy of Planet Of The Dogs,our book for children and dog lovers -- and well received by members of Dogster's Dog Eared Book. Email me at barkingplanet@aol.com if you would like us to send a complimentary copy.
For more information, please visit www.planetofthedogs.net and http://barkingplanet.typepad.com.
Best wishes,
Robert McCarty
Barking Planet Productions

I visited the sites, e-mailed Robert and look forward to receiving the book. Robert, I also sent your link to my sister, a Reading Recovery teacher in Illinois. She is a dog-lover, also, and looking forward to participating in Sit-Stay-Read when she retires. Thanks for visiting. Come again any time.

Sometimes dream days - or moments - come to us because we're open to them and willing to share them, which is probably why you're blessed with so many! This was a nice, dreamy post to read on a rainy morning over here on this side of the Bay.

I've been thinking that I need to do some reading on the history of recreation. There is a difference between a resort and a theme park; I suspect that understanding that difference might help resolve some of the land use conflicts in my township. Or maybe not. I'll have to study on it.

Susan, your comment sent me to the shelves for STATE PARKS: THEIR MEANING IN AMERICAN LIFE, by Freeman Tilden. I've never read this book but will take a look into it and see what I find.