Down to Earth Again--and Then to Town 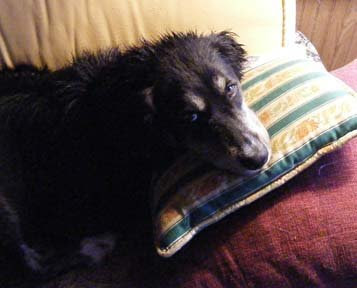 I'd like to call this picture "Penitent Pup," but that would be a lie. Sarah may be chastened, but she repents of nothing. It wasn't enough to be put through her Sit, Lie Down, Stay, Come paces and then to run around joyously and get soaked nose-tip to tail-tip (her dog-mom got soaked toes to knees) in tall, wet grass. No, it wasn't enough, because if there is deershit to be found, a dog will find it, and the finding will be instantly up close and personal. Good thing Bruce is opening the bookstore this morning! It's laundry time again at our house, and even Sarah's collar is in the wash.

Richard Peck, the Newberry-winning children’s author, was in the bookstore when I got there, along with a couple of other children’s book authors, all of them having found their way north from Leland to Northport. What a surprise! Peck left with a copy of one of my favorite books, Van Loon’s STORY OF MANKIND, the very first (1921) Newberry winner. Our visit was cut short, as I had the annual Friends of the Library meeting to attend. I do still have tickets for his talk tomorrow evening in Leland, and the $20 family ticket is a real bargain. The event is aimed at fourth-graders and up. Individual tickets for adults and children are also available. 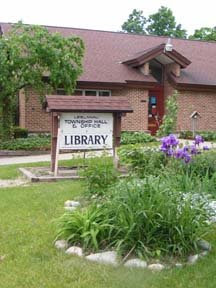 Down at the township library on Nagonaba Street, before voting unanimously to re-elect the two officers whose 2-year terms were up and who were willing to serve another two years each, we were all held spellbound by a slide and video presentation by Hank and Patty deYoung of their recent trip to Tanzania. Moving and spectacular! I asked Patty if she and Hank would be willing to present the show again this summer at the Painted Horse Gallery. I can think of a lot of people who would love it but who missed today’s meeting at the library.

My small official role was to announce the speakers for this year’s Friends of the Library summer series. The series kicks off Tuesday, June 24, with Porter Abbott, author of THE CAMBRIDGE INTRODUCTION TO NARRATIVE (2nd ed.), who will introduce the theme of this year’s series, story-telling. We’ll skip 4th of July week--already crowded with events, and I’ll list as many as I can very soon. On Tuesday, July 8, Kathleen Firestone will talk to us about “Stories for Our Grandchildren.” John Mitchell on July 15 (“Leelanau Boat Stories”) and Elizabeth Buzzelli on July 22 (“Scaring Ourselves with Stories!”) take us to the end of the month, when on July 29 we’ll have poetry night, this year themed as “Stories and Fragments in Verse.” DO NOT BE FRIGHTENED OF POETRY NIGHT! It’s great fun! Anyone who has written at least one poem is welcome to participate in the round-robin reading, and we welcome a large, appreciative audience. Starting time on Tuesday evenings in the series is 7:30 p.m., and punch and cookies are served afterward. 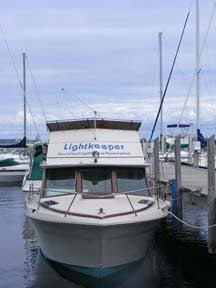 Before returning to the bookstore, Sarah and I took a quick harbor tour. George Carpenter will be taking a group of artists out to South Fox Island soon, and I was relieved to see (since David is one of the group) that the ‘Lightkeeper,’ their transportation for the expedition, is a sturdy-looking craft. The bank of clouds hugging the eastern shore of Grand Traverse Bay looked as airy as whipped cream. As always, too, the doors called me. A door standing out in the open has such magic. For years there was one in a little grove of trees out on Coast Guard Point in Grand Marais, and David and I still speak of it when we walk out that way, though the door itself is gone. And that's the closest to a deep thought you'll get from me today. 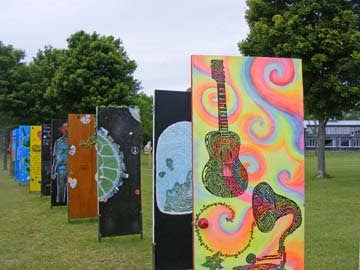