Sunshine Between the Clouds 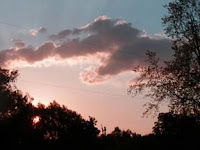 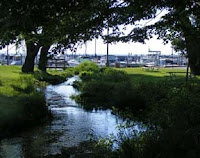 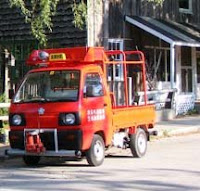 Sarah and I were up and out of the house today before the sun had cleared the treetops. Our early overland ramble gave me plenty of time to get laundry hung out on the line before going to Northport, where I found the creek high from last night’s rain, Edie Joppich’s Bay Street Gallery looking bright in the morning light, and a fun new Japanese vehicle parked across the street from Barb’s Bakery.

At the bookstore, the first book that comes to my hand is a volume of essays entitled MINDFULNESS AND MEANINGFUL WORK: EXPLORATIONS IN RIGHT LIVELIHOOD (ed. Claude Whitmyer; Parallax Press, 1994), and my first association with the title is Paul Gruchow’s observation that one might say it was “inefficient” for him to make his living as a writer (although he manages to do so) if one were to apply to his work the same standards generally applied to food production. Getting a better-paying job and leaving book-writing to people like John Grisham would make more sense, from such a point of view, because Gruchow could buy Grisham’s books for much less than what it costs him to write his own and have more money left for other things. I love this analogy. It points up the whole absurdity of the argument that “it doesn’t pay” to have a garden and grow your own vegetables. If doing what you love isn’t more important than making money as much money as possible, what on earth will all your money buy? What are you working for, anyway?

Meaningfulness, on the other hand, can’t be measured, rightly or wrongly. The cover illustration of M&MW, based on a painting by 13th-century Chinese artist Chih-Tê, shows a grinning, robe-garbed figure (peasant? monk?) leaning on a hand-made broom. The orientation of the collection is Buddhist, but after glancing down the table of contents, I turn to “Amish Economics,” by agricultural writer Gene Logsdon. I first read Logsdon in the 1970’s and more recently met him at a Great Lakes Booksellers book fair in Dearborn, where he was signing his then-new book, ALL FLESH IS GRASS. I was as excited to meet him—“in person!” I excitedly told my friends afterward—as most people would be to meet a film star.

It’s good, Logsdon’s essay, and I browse through a couple more before deciding that, since I have found my own life’s meaningful work, “inefficient” though it may be from the narrowly economic perspective, it is time to return to the novel I started last night, in which John James Audubon is the main character and the setting the Atlantic coast of Labrador. Canadian author Katherine Govier captured my attention on the first page, and I’m devouring the chapters. The only mystery is why it took me so long to open this book: the dust jacket is so lovely I’ve been moving it around the bookshop for weeks, reluctant to hide the cover away between other books on the shelf. Govier takes me in a sailing ship in 1833, along a coast still being mapped for the first time, during a few months of Audubon’s life left sketchy by his published writings. “A gap is an opening, a window, an opportunity,” writes Govier, inviting us through to Audubon’s Labrador as she has imagined it. CREATION has been called a “novel of ideas,” and, in truth, episodes of passion and scenes of murder are presented only through the characters’ memories and conversations. But what a lively presentation of ideas! There is not a single dull page. One feels the wind, the wet slipperiness of the rocks, tension between characters, ecstasy over birds in flight, guilt, ambivalence, and the self-importance of “secrets” guarded in men’s hearts.

I’m adding a new blog to my list of links: How could I resist a site called “Dog Ear Diary”? And the blogger loves dogs and horses as well as books, so it’s a natural addition. 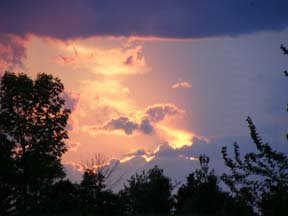 I have added Mindfulness and Meaningful work to my shopping list--thanks!