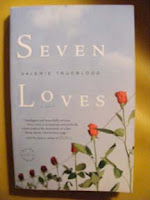 In each chapter, each separate yet interwoven story of SEVEN LOVES, Valerie Trueblood picks up the glass prism of love and turns another side toward the light.

SEVEN LOVES is a series of glimpses into the life of May Nilsson. The first look shows us a retired English teacher who lives alone in a senior apartment building in Seattle, a fiftyish widow who worries about her own diminishment as she ages. Working in a downtown office as part of a program called ‘Senior Class’ that returns older people to the workplace, May develops a sort of crush on a beautiful but awkward co-worker, a sad young woman full of confused compassion, who reads the newspaper every day “as if it were a letter (she) had to answer” but who cannot figure out how to actually do anything with her profound empathy. As though she is randomly pulling puzzle pieces from their box, Trueblood goes on to show the reader, through each precisely and intricately written chapter, May’s several passions during her long life, some of which caused her great heartache, some tremendous joy. Through her reckless affair with an improbable stranger years before and its attendant toll on her marriage, her alternating loyalty and disloyalty to her physician husband, her adoration for her weak, drug-addicted son and her compassion for the guilt-ridden police officer who holds himself responsible for her son’s death, Trueblood’s puzzle pieces fit cleanly, giving us a tender and studied picture of May’s life and the passions that guided her.

In her eighties, after May suffers a serious stroke, she is moved to a nursing home where she begins a flirtation with Sven, a kind but misguided attendant who helps care for her. By this time May can no longer manage her own buttons; her speech must be guessed at by others. She daydreams about a planned outing to a farm where bees are kept, thinking, “A bee’s life of effort, of unforced, pitiless agreement. Yet how the bodies twitched, and whirled off, as if in a passion. She hoped they would see some of that on this trip. The message bringing and shooting off in pursuit and the ecstatic burrowing, not just the boxed seething.” May’s need to continue to reach out, to love, to save, results in her own bungled attempt to rescue Sven from himself and that, ultimately, leads to her own destruction.

In the seventh and last chapter Trueblood shows us May’s early life, along with the loss of her mother (a woman whose socially passionate nature May inherited) and her need to recoup some of her mother’s fire—her “colors,” as May thinks of them. The final puzzle piece, May’s past, shows another facet of how she came to be a woman willing to risk all and anything for love.

There’s a tendency to think of love only in its traditional forms—romantic, maternal, or non-specific love for humanity in general—and to ignore the rest, particularly in these days when so many forms of love are seen as destructive or, worse, “unhealthy.” In SEVEN LOVES, Trueblood seems to be saying that love in all its forms is what gives life depth and dimension, “color,” as it were. She writes, “Love, to May, even if it conjures itself up out of nothing . . . is not imaginary . . . . The body feels it and it is always real.”