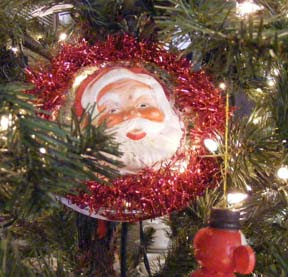 Only eleven days until Christmas, so here’s another ornament. This one is on Donna’s tree, down at the Treasure Chest, a Santa that belonged to her father. Cookbooks, horse books, dog books and history—those were the front-runners at Dog Ears Books today.

One shopper arrived mid-afternoon at the very moment when the awful old “Starvation!” feeling was overtaking me. (Somehow lunch time had come and gone without my noticing.) Fortunately, my sister Deborah had sent a big box of Florida citrus, and there was a partial jar of peanuts on hand, so when Marjorie admitted her blood sugar was feeling low, too, we shared an orange and nibbled peanuts until our survival was assured.

Now David and I are home for the night, listening to forecasts for single-digit temperatures overnight. It won’t be the first time. It won’t be the coldest night we’ve ever had in Michigan, either. That would be almost -40 F., right here in Leelanau County, many years back. A memorable December—but what year was it?
Posted by P. J. Grath at 4:59 PM

Yes, only eleven days until Christmas and the shimmering symbol of the holidays in the Z household still has yet to see its first present beneath its boughs. We really must soon consider venturing out into the mass hysteria otherwise known as "THE MALL."

Oh well - it seems that the Z household has been otherwise occupied with automobile issues. Returning to the city from Northport last week, the little red vehicle decided to sputter its last remnants of life on a busy curve, on a busy highway, in a busy city. Keep in mind the little car was loaded with a general accumulation of items that seem to accompany us back and forth between Grand Rapids and Northport and of course Louie (our faithful, lovable, large, fluff of a sheepdog. Fortunately, we coasted to the shoulder (highway engineers should be shot for designing a shoulder as narrow as this one was) but thank goodness for cell phones, sons who answer their cell phones and wreckers that work on Sundays. At any rate, we have been occupied with automobile shopping. (Guess what we're getting each other for Christmas.)

However, that little disappointment pales in comparison to this evening's bit of household trauma. Louie went outside to do what dogs should do outside rather than on the oriental rug and in trying to negotiate the steps leading up on to the deck, he slipped and was left hanging over the side of the steps with his leg caught up in the deck support. We heard his frantic barks and after locating him in the dark, we were afraid that his all ready ailing leg (old age has brought on weak legs and hips) was broken. After both of us had lifted him out of his predicament and carried him down the steps, he limped around for a while and seemed to recover. My daughter was frantic, my wife was upset and even my son after having been text messaged by his sister, called to read his mother the "riot act" for allowing Louie outside without supervision. This, by the way, is the "tough macho" 24 year old who acts as if he can handle anything.

Good grief Charlie Brown, we really must stop fooling around with these "minor" distractions and make work of putting some gaily wrapped packages under the tree. Otherwise, we will have to rely entirely on the arrival of Santa to supply this years gifts for the family. As much as I still believe in Santa - in a certain sense - I don't think I should depend on him to slip down the chimney with his bag of goodies.

The temperatures may be dipping into the single digits, but keep the fires of literacy blazing in the shop. We'll see you soon.

Omigot, z! Crises to the left of me, crises to the right of me! I know that dogs get old in all seasons and that friends and relatives have misunderstandings throughout the year, but it does seem as if the stars conspire to make everything more complicated as the holidays approach. SO GLAD YOU ARE ALL RIGHT! Cars can be replaced--people cannot be! Stay warm and safe! And thanks again for writing.