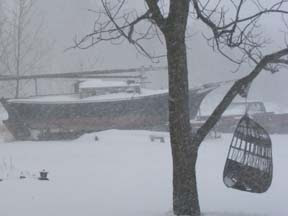 After a mildly stressful week of hurrying to get cards and packages in the mail, our household morning today featured a four-hour reading-aloud marathon. I’d already been thinking that THE ISLAND STALLION might be a good book to introduce David to the work of Walter Farley, my favorite childhood author, so when he asked this morning, “What are you reading?” and I’d already made coffee, we dug right in. Would I find the same magic I’d found in upper elementary school when my friend Kathleen and I devoured everything Walter Farley wrote?

The Island Stallion has all the makings of a cracking good yarn. There is the romance of faraway islands, one of which encloses a hidden world not seen by human eyes for centuries. As hardly needs saying (given the title), there are beautiful, wild horses. There is danger and more than one near-death experience. Moral dilemmas present themselves, and knotty problems of survival and decision have to be thought through. The passion Steve has for “his” horse (literally, the horse of his dreams) is matched by his friend’s passion for thrilling archaeological finds, and the two friends find themselves in conflict over and over as the adventure progresses.

The wild red stallion’s dominance over his mares is threatened by a challenger (here I admit that racist overtones troubled me), as, similarly, the entire hidden world’s integrity and continuity are threatened by the outside world (if the secret becomes public) and, more specifically, by a heartless brute of a man, Steve’s friend’s stepbrother, whose only interest in wild horses is inciting them to physical rebellion and then subduing them by force. Both Steve and his friend, Pitch, are tempted by the desire to possess permanently what they most love, even as they realize that possession will destroy a priceless world.

Near the close of the story, as Steve is pondering a letter to his parents, he reflects that his father is more likely than his mother to understand his feeling for the wild horse he wants to rescue, and I had to stop and think about that. Not a single female character appears in the book, and the only one who appears indirectly lacks the requisite passion for horses or even the ability to understand such passion. How, then, explain the spell cast over me, as young girl, by this adventure? How explain Farley’s appeal to girls as well as boys?

Well, first, the horses, of course. But there is also, importantly, the way girls identify with horses rather than imagining themselves in the role of owner. This feeling, completely alien to the stepbrother’s urge to dominate animals, is the main character’s feeling, too, so that girl readers can imagine themselves not only as the Flame but also as Steve. This has nothing to do with gender, everything to do with love.

When Steve at last succeeds in mounting and riding Flame, his eyes fill with tears. “No longer did he feel that the stallion was separate from him, that he was riding Flame. It was entirely different now. It was as though he and the horse were one. He was Flame! He thought the same, felt the same! They were running because they loved to run, because this was the way it was meant to be!”

Rough-and-ready boy readers have plenty of heart-pounding vicarious violence to enjoy as Flame battles to the death not one, but two challengers, and the excitement of the many challenges to life and limb are enough for readers of either gender and any age. I found myself defending (in one of our many interruptions to the story to discuss one or another aspect of the writing or the plot) the piebald stallion, described as “ugly,” with his large, heavy head and eyes of mismatched color. He couldn’t help his looks. He was a horse, after all, not a brutal man like Pitch’s stepbrother. The piebald was no more cruel than Flame. All the horses were acting only according to their nature.

--Ah, there’s another, more general appeal to girls in a story like this: What young girl in the world would not want to be smart, beautiful and wild, “conquered” by love but remaining forever untamed? Women, am I right?

It’s another cold night, and the blowing snow is thick. It could be a wild night.
Posted by P. J. Grath at 3:22 PM