Water and Trees the World Over 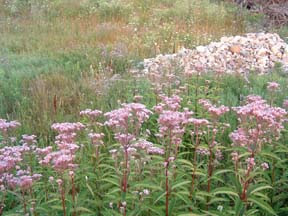 “When my mother sent me to fetch water,” writes Wangari Maathai, in her memoir entitled UNBOWED, “I would get lost in this fascinating world of nature until she would call out, ‘What are you doing under the arrowroots? Bring the water!’”

In Kenya, in Connecticut, and in northern Michigan, too, small streams first emerge amid moss and ferns, passing through a variety of habitats as they gather volume. For young Wangari, the presence of arrowroots meant water. Here where I live, a course of flowing water across a field is indicated by a haphazard parade of Joe-Pye-weed wandering through the grass.

There is no telling what a day in the bookstore will bring! A conversation with my first customer this morning, coming to pick up two copies of Berndt Heinrich’s wonderful out-of-print work, THE TREES IN MY FOREST, revealed the fact that she herself had traveled to Kenya, where her daughter had gone to work with the Leakeys, and this Northport woman had been invited to dinner by Mary Leakey, Richard's mother. She told me that the landscape of the region she visited reminded her of the southwest United States, and her daughter mused that perhaps that was why she felt so at home there. I remember how the sand beaches and pine trees of the north coast of France felt like home to me, as did the lakes of Scotland.

Next visitor was pal Chris Garthe, and telling him about all of the above sent us both to THE NEW FIELD BOOK OF FRESHWATER LIFE, by Elsie B. Klots, to look up arrowroots native to our part of Michigan, then to the Leelanau County map to show each other the boundaries of our small home "worlds," both within the same township but without overlapping borders.
Posted by P. J. Grath at 7:19 AM