A Cold Day in Our Little Village 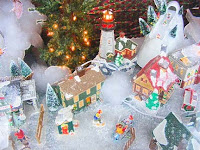 During the first early afternoon hour this last Sunday before Christmas, the shortest day of the year, the temperature plunged. I’d gone to the bookstore (usually only do Sundays during the summer, but I had a few things to take care of today), where I enjoyed coffee and a chat with friend Susan C. while visitors from Leland browsed the shelves. A look through the windows was enough to tell us that the wind had picked up. Horizontal bursts of snow were flying down the street. Br-r-r-r! Not much later, David and I made our way heroically to Tom’s Market for a major grocery shopping. Done! Ready for Christmas and prepared for the possibility of being snowed in! Being home in front of the fire by 2 p.m. was a treat!

Today’s picture shows one small section of the miniature village set up in the window of the former pharmacy, courtesy of Patty DeYoung. Skies have been dreary the past three days, but the colors of holiday lights bring us good cheer. Thank you, Patty!

The book I’d like to highlight today is by an old friend, Dan Gerber, originally from Fremont, Michigan, recently of Leland (a neighbor back in the 1990’s), and now a resident of the West. Dan’s latest book of poetry, A PRIMER ON PARALLEL LIVES, has been chosen as one of this year’s Michigan Notable Books.

The press release I received along with the list of 2007 Michigan Notables says: “Gerber’s seventh book of poetry explores his fears and doubts as a youth growing up in western Michigan and reveals the landscape of his current home on California’s central coast. Nature and observations of the world around him are central to Gerber’s poems. His poetry explores everyday experiences and images, successfully converting them into something unique and magical. Gerber won the 1992 Michigan Author Award and is a past recipient of the Mark Twain Award.”

What I am aware of throughout is the simplicity of language and recurring threads of concern that inform this writer’s thought. Searingly personal without being in any way tediously introspective or agonizing, the poems in this volume are haunted by the presence of the poet’s mother (from his childhood to her old age) and graced by natural objects. They are also criss-crossed by dogs, his constant companions (“My old dog’s eyes stay with me/though she’s gone”), and frequently visited by the Buddha.

Much of the imagery is Western. This is natural, in that Gerber now makes his home in the West. But Michigan, unnamed, is still in the background, as I sense in this stanza:

"I am always returning to the edge of water,
lapping at the loam of a bank under pine needles,
and slapping at the bellies of dock planks.
Or I’m looking into one of those still, black ponds,
which seems to me like a pupil of the planet,
through which it watches the other stars
and finally our own silent faces,
going down to its ever-intensified heart."

Tonight a film of ice will close over many more pond and lake eyes, and in the coming months we will have to look directly at the stars without water’s mediating reflection.
Posted by P. J. Grath at 1:55 PM

Enjoy that cozy fire emanating from your hearth. May it warm your spirit as well as your toes.

The results of Demeter’s mourning may sometimes seem long, and the reawakening of spring may appear as though it is a dream too far off to be anticipated. However, those magical times during winter when the world stops, the snow swirls (or rather - blows wildly), and allows us to curl up with loved ones by the fire are few and far between. So forget anything beyond the end of your driveway and enjoy a day of relaxation and reflection of those things and people that are important.

Merry, Merry Christmas to you and David with much love from the Zs, who are blessed to count you as friends.

Best Christmas wishes and love to you two and your family, also. xxxooo!