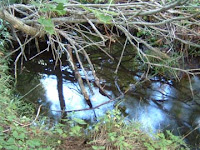 Again I am reading two books at once. Not very far along yet in either, I am so excited by both that I turn from one to the other, compelled and distracted at the same time, a child between two equally attractive new toys. One book is called CUTTINGS FROM A ROCK GARDEN and is a collection of short writings by Lincoln Foster and Laura Louise Foster, husband and wife, both gardeners and artists. The other is UNBOWED: A MEMOIR, the life story of Wangari Maathai, first African woman to win the Nobel Peace Prize, awarded for her efforts to save the forests of Kenya, a project that has become worldwide in scope.

There is some common ground, obviously. Still, I am surprised and delighted by purely coincidental similarities between the Fosters’ New England homestead and Maathai’s childhood environment in the Central Highlands of Kenya. Kirinyaga (named Mount Kenya by the British) dominated Kikuyu spirituality, Maathai writes. “Everything good came from it: abundant rains, rivers, streams, clean drinking water.” In the Fosters’ Connecticut neighborhood, Wangum Lake on top of Canaan Mountain was the source of their own Deming Brook. “The brook rises just behind Bradford Peak, Canaan Mountain’s highest point,” collecting and dripping and trickling, joined by other waters (seeps and streams), widening and purling until “plunging in a series of falls down the steep escarpment that forms the south face of Canaan Mountain.” The Fosters had an emergency 30-foot well to carry them through drought years but much preferred the sweet, rushing brook water from the mountain. Maathai writes of her home stream, Kanungu, bubbling up fresh and clear from the good Kenyan earth, “I imagine that very few people have been lucky enough to see the source of a river.” She explains how (as she learned later in life) the roots of a fig tree penetrated to the underground water table and brought water up to where it emerged as a spring. Because the people held the fig tree sacred, their fresh water source was culturally protected.

Mountains, streams, reservoirs, mills, trees. I can imagine the Fosters visiting and appreciating the Aberdare forest, as I can imagine Maathai taking curious pleasure in exploring the woods and valleys and gardens of Canaan Mountain, each returning with satisfaction and contentment to home soil.

More and more my own sense of home becomes increasingly localized, shrinking from county to township to the small, irregular wedge bounded by M-22, Jelinek Road and Kovarik Road. It contains enough variety for a lifetime of exploration. Once, years ago, after a hard afternoon thunderstorm, we heard the rushing roar Laura Foster describes and, following our own usually small, suddenly overflowing creek upstream, found a magical, temporary world of cataracts and waterfalls. Another time, further downstream—on the Lake Michigan side of the highway, in fact—we tried to keep up with our elderly neighbor, Julius Houdek, as he led us up- and downhill to where the creek empties out into the big lake. Julius knew every tree. He knew every species, but he also knew every individual tree. There is also a story Ricky Deering told me once about the time his father took him to see a ram on Kovarik Road. Not a male sheep, but a water ram, a device for pumping water using the force of falling water itself rather than an outside power source. The very idea of the ram fascinates me. It captures fully for me the magic of water.
Posted by P. J. Grath at 5:31 PM