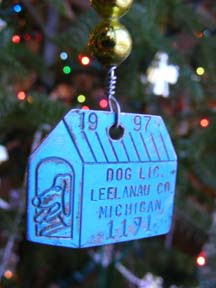 Couldn’t sleep this morning, I was up at 4 a.m. to address a few more holiday cards. Then I finished reading SUITE FRANCAISE, then read an essay on photography by Barry Lopez (who says he misses photographing but found that the camera distracted him from what was happening around him, so that his writing of those happenings suffered). But earlier, in the dark, before I’d given up on getting back to sleep, my mind had started working over a connection between Christmas tree ornaments and books, and now, with my second cup of coffee, I want to see if I can’t stretch this point.

Although a bookseller, I do not call myself a book collector in any serious sense of the word. Books collect, seemingly by themselves, in our house--like dust kittens and with about as much rhyme or reason. There are the “books not good enough to sell in the bookstore” (mine, often lacking bindings altogether), “books by people I know” (most of these are David’s, though my share is increasing), travel books (mostly outdated), cookbooks and dictionaries, and then there are pockets here and there of books that belong together in groups, though what they have in common with other groups might be hard to determine. My Walter Mosley and Wendell Berry books, along with those of French philosopher Henri Bergson, are examples. I also have books on agriculture, botany and gardening.

The assortment of ornaments that have collected themselves in our house (I can take even less credit for having directed this agglutination) would be more difficult to break down into categories than the books. Among the boxes of ornaments are cherished gifts from loved ones, thrift store finds and a small number of self-indulgent purchases—but these groupings hardly seem like categories.

Both the books and the ornaments (many used before they came to us, in both cases) accumulated over time, that’s all, and the resultant accumulation would be meaningless to anyone whose history had not included this very particular assembled flotage. My life, David’s life, our life together—the books and ornaments provide hints and glimpses. It is nothing like the view one would have by looking at a room of David’s paintings or even reading successive entries in this rambling site of mine. Those views are intentionally created. The modest collections, on the other hand, have a haphazard, accidental quality that betrays another side of who we are.

Among our books there are a few we both love equally, the “favorite child” of an otherwise pretty random home library. These are the books that have to do with houseboats or living on (or in) boats, and the gold standard for this category, the WIND IN THE WILLOWS for adults (of course, WITW is for adults, too, and belongs here; we have three copies at present), is Harlan Hubbard’s SHANTYBOAT. Harlan was a painter from Kentucky, living on the shores of the Ohio River, when he met Anna, a librarian at the Cincinnati Public Library. They both loved music and initially got together to play duets, at Anna’s bold suggestion. Next came picnics and then camping trips.

Harlan’s lifelong dream had been to build a “shantyboat,” an unpowered houseboat or driftboat, and take it down the Ohio and Mississippi Rivers, a dream Anna encouraged him to follow, and so they married and set up housekeeping on the riverbank, camping and building their boat. (In the bookstore, I have a print of a painting Harlan made of the shantyboat across the river and upstream from Cincinnati, at the site of its building.) The drift downstream took years, what with long stops to sow and harvest seasonal gardens along the way. They traveled with dogs, books, musical instruments. Harlan caught fish, and Anna canned food. They bartered with people on shore.

“It might be said that the river flowing by is the present time, upriver is the past, and downstream lies the future.

“In the past with us was the country locked in the enfolding hills upstream. It had once been the promised land, the goal of many river excursions made when we were living on the hilltop. Our frontier had gradually been extended upriver as we sought new and unworn shores….’”

There is another book of the same title, the SHANTYBOAT by Kent and Magaret Leighty, and it’s a lovely little book in its own right, though their trip down the Mississippi was different from beginning to end from that of the Hubbards. Then there is TWO CANOE GYPSIES, by Melville Chater, the story of a trip made through the “back door country” of Europe, and there is CRUISING FRENCH CANALS AND RIVERS. (Where is SAN LUCCA this morning? It should be on this shelf!)

There are a couple of children’s books: HOUSEBOAT GIRL, by Lois Lenski, and “HELLO, THE BOAT!” by Phyllis Crawford, the latter story set in 1817, along the Ohio, the former in the twentieth century. Lenski writes in her foreword: “When Harlan Hubbard drifted down the Mississippi River in 1949, he met them [the Story family] in their houseboat on Nonconnah Creek below Memphis, and he told of this meeting in his book SHANTYBOAT.” Hubbard helped Lenski locate the Story family in 1954, “in a newer and larger houseboat than the one at Nonconnah Creek,” and she found them a perfect ‘story family.’”

We are not saltwater sailors but armchair drifters and rowers, and these books constitute a window into that part of our souls.

In a similar way, among the boxes of ornaments from so many different times and streams there is one special subcollection, given to us last year by Amanda Holmes of Omena. She made them from her mother’s dog Lorna’s old license tags. I still have all of Nikki’s tags and haven’t yet decided if they will become future tree ornaments, but for now, the “Lornaments” hang on the tree at Dog Ears Books, and, since they are dog tags, I see Nikki in them.

What do other people see? Are these a window into my soul?

Maybe not this year, but at some point (when you're ready) you must hang Nikki's dog tags on that universal symbol of Joy. Those tags that once dangled from "she" who brought such happiness and delight, should now hang as a joyful reminder of her at this magical happy time of year.

On another note, congratulations on finding the camera, the return of the fine photography is a welcome sight.

I agree with Z that Nikki's tags belong on your tree when you're ready. You shared Nikki with bookstore customers, family and friends. Nikki shared her sweet self with those people. Together you and Nikki brought many people great joy. I think that seeing Nikki's tags would bring smiles and happy memories for so many people Pamela.

David thinks you are transparent - ha! I'll be smiling at that today as well as smiling with sweet Nikki memories.

Ah, comments! It's so good to find messages waiting for me and to know that a couple of my favorite people have left them. Thanks!

First, I am loving the pictures, Pamela! We weren't going to come up this winter because of Chloe, but I'm aching for some winter Northport now so we'll just see about that! I loved Suite Francaise, but I'm also enjoying your reports and meditations. Keep 'em coming!

Glad to know you're still visiting and reading the site, Dorene. I'm keeping up with yours and Joe's, too.