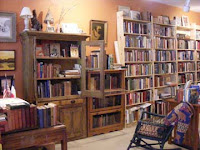 Is there a bookseller alive who can resist books recounting the experiences of other booksellers? A few weeks ago I devoured REBEL BOOKSELLER, by Andrew Laties, and then THE SEVEN STAIRS: AN ADVENTURE OF THE HEART, by Stuart Brent (latter first copyrighted in 1962). Both are Chicago stories, as well as bookselling stories, so for someone who grew up in the shadow of the Second City, the appeal is irresistible.

Both books (as is only natural) explore serious challenges to the dream of having one’s own bookstore. Although publishers came to his rescue more than once, Brent lays a lot of blame at publishers’ doors for turning books into commodities. The thrill of seeing publishing houses on the board at Wall Street is, for Brent, offset by his suspicion that investors are not looking to invest in a “cultural renaissance” but want only a “sure thing,” a safe return. All the market excitement of mergers and acquisitions involving publishing houses, Brent thinks, only mean that publishers and their stockholders are more and more driven to want only block-busting best-sellers.

Laties blames the returns policy. It’s hard for a small, independent bookseller to survive when the big-box boys are ordering tens of thousands of books at a time from publishers and distributors, for deep discounts, and then returning tens of thousands for credit, adding another 90 days to their invoices. Publishers, unpaid for months on end, are caught in a squeeze. Often they print too many books, based on early orders (because who can calculate returns in advance?), and then have to warehouse or remainder or shred their surplus, adding to the cost passed along to the end customer. Books should be sold like any other retail commodity, Laties says: you order it, you pay for it, it’s yours, to sell or not to sell.

I’m sympathetic to both these views, as well as the recent NEA report that says fewer Americans are reading books for pleasure these days. There’s more than one culprit here, in other words, but I do see a common theme, and its name is, I’m sorry to say, adventure avoidance. In theory (en principe, as the French and I love to say), free market capitalism is the place for risk, the ideal arena for business adventure, but what is the reality? People who want to take wild fliers with their money go to a gambling casino, where the experience is marketed honestly as entertainment rather than investment. Investors in the market, on the other hand, are usually looking to minimize risk and maximize earnings, as are the corporations selling stock. This is why “free trade” agreements with Third World countries put the governments and workers of those countries over a barrel with their hands tied behind their backs. The big guy’s object is not to level the field but to gain for himself the biggest possible advantage at the outset, and fairness be damned. It’s horse racing minus handicapping, with drugs and fixing thrown in. (See CONFESSIONS OF AN ECONOMIC HIT MAN; THE SHOCK DOCTRINE; EVERYTHING FOR SALE.)

But back to bookstores--are we talking about small independents run by foolish idealists, big box chains, or online giants? The second and third groups, already financially advantaged, will continue to seek further advantages wherever possible. Chain stores of every kind, like multiplex theatres, have as part of their business strategy identifying a small, successful independent and invading its territory. This is supposed to be good for the consumer, too, offering greatest breadth of product at lowest price, but the argument Laties presents casts serious doubt on the results, at least for bookselling. Book customers would be paying less for new books if huge chains did not have the advantage of ordering thousands of books on credit and returning them for continued credit.

Brent tells the story of how he found his original Rush Street location and the way he imagined the store versus the shock of business reality. “I saw the little room filled with books and records, a fire going, and myself in a velvet jacket, being charming and gracious to everyone who came in.” He jumps … at last everything in place, and—“And no one came to visit me. Morning, noon, and night it was the same. I was alone with my books and my music.” His books, he writes, were “all so good” (one hears the exclamation mark that does not appear after those words), and: “Still nobody came.”

If publishers lack a sense of adventure today, if corporate chain bookstores are avoiding adventure, and if (as Brent believed in the 1960’s and the NEA seems to suggest today) buyers of books want only safe, known-quantity “products,” is there still room for adventure in the world of books? (And don’t you just love rhetorical questions?) I’d like to give two answers.

The first is that my life IS an adventure in books. On July 4, 2008, Dog Ears Books will be 15 years old. It hasn’t been easy, and it hasn’t been a laugh riot every single step of the way (living a dream is a much bigger challenge than simply having one), but it’s been done without a trust fund or a retirement pension or health insurance, and it’s been done with a whole lot of re-invention along the way, and I’m proud of having bootstrapped my little operation up from its origins in an unheated shed. Part of my adventure is books, part is business, and part of it is meeting other real book people, those who absolutely love--and regularly buy--books. Just as travelers share carefully guarded information about wonderful places they’ve discovered, my customers and I learn from each other about book treasures and adventures.

Which leads to my second answer: My bookstore offers an adventure in books to anyone who walks in the door. My new books are not corporate-picked but chosen by me (taking into consideration suggestions from friends, customers and my distributors, to be sure), and with the used as well as the new, decisions as to what deserves shelf space is one I take seriously. Sometimes on those lonely days Brent describes, I look around and say aloud (reminding myself), “This is a treasure trove!” For people who want homogeneity in their “shopping” experience (the word doesn’t even seem appropriate), does my bookstore stray outside safe, familiar borders and arouse anxiety? How many times over the years have I heard people exclaim in surprise and delight over the contents of Dog Ears Books, after they’d driven by the store for years without coming in, assuming I sold only used mass market paperbacks?

Yes, there is still adventure to be found in the world of books, as in the world at large. All you have to do is get off the expressway, both the literal and the metaphorical, and explore a little.

My deepest gratitude goes out to explorers from Chicago, Grand Rapids, Ann Arbor, St. Louis, Seattle, and from right here in NORTHPORT!-from all parts of the country and world that my customers call home. Your Dog Ears Books purchases keep my little bookstore open. May your numbers increase!
Posted by P. J. Grath at 5:58 PM