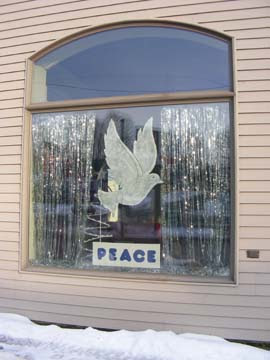 Bankruptcies, foreclosures, surgeries, illness and death, family and business worries, cranky letters to the editor in our weekly local newspaper. So many people are in full-blown crisis or just plain bad humor as the holidays approach. Why shouldn’t I go on a little rant, too? I’d like to purge myself of any residue of grinchiness before it’s too late. So here are my top three most-detested phrases in current usage:

1. “POLITICALLY CORRECT/POLITICALLY INCORRECT”
A nationally syndicated columnist recently complained bitterly, in print, that “Merry Christmas” is now “politically incorrect,” joining legions of vague speakers and writers who prefer to make accusing statements in veiled terms and cloak insults in the armor of self-righteousness. Both sins fall under the use--usually accompanied by a snide smirk--of this ubiquitous and annoying term, “PC” for short. Let me state my own position clearly. I do not greet or take leave of people whose beliefs are unknown to me, much less those whose beliefs would make the greeting inappropriate, with “Merry Christmas.” And that’s not because I’m quivering in fear of thought police but because I want to express seasonal goodwill to all, regardless of belief, neither excluding nor insulting. To me, that’s what goodwill is all about. Talk of PC is not limited to the holiday season. Those who take pride in being “politically incorrect” see themselves as courageous defenders of besieged positions, but I’ve heard the phrase and seen the smirk when the language being used and labeled, proudly, “politically incorrect” was language I would not use in any arena, words one would expect to see in the worst graffiti or hear in the most outrageous rap lyrics. Nowadays, instead of expecting to have their mouths washed out with soap, big boys and girls with naughty pre-adolescent urges intact spew profanity and racist and sexist remarks while waving a banner proclaiming their courage in the face of PC-ness. I’m not buying it. It’s true, of course, that people sometimes use words timidly. Sometimes, though, what the snide denigrate as timidity may be intentional goodwill (rather than exclusion) or reason (rather than insult) or plain, old-fashioned civility. I don’t think there can be an excess of civility in public discourse.

2. “ETHNIC CLEANSING”
I blame journalists for this one. What are they thinking? The phrase originated in countries run by monstrous dictators who didn’t want to call their deadly policies by the correct name! In the mildest forms, policies called EC constituted oppression; at worst, they are out-and-out genocide. When free men and women of goodwill and concern for the downtrodden buy into the metaphorical language of “cleansing,” they give up their ability to frame outrage in meaningful terms. If ethnic groups are being oppressed or harassed or denied justice or deprived of their very lives, let’s say so, straight out. Don’t help bullies reframe their bullying in cleaner terms.

3. “TOOK RESPONSIBILITY [FOR KILLING/ACT(S) OF TERRORISM]” )
Again, journalists! Think about the language you use! The statement behind statements of this kind is simply “We did it!” That’s the bottom line, and there are more ways than one to translate such a statement into news-talk. Why not frame it as an admission of guilt? Why not call it a confession? Why give murderers, of whatever political stripe, a phrase that glorifies their deeds? Whose side are you on, anyway, guys and gals?

Okay, there it is. One last thought: wishing peace only to men of goodwill isn’t asking for the world to change very much. So I say, Goodwill to all! Happy holidays!!!
Posted by P. J. Grath at 7:55 AM

Oh wow, you’ve hit a chord with me on this one. We have become so afraid of being “PC” that we lose the risk of expressing ourselves and more importantly just being ourselves. I mean good grief, why can’t I acknowledge the season as it was intended, instead of what it has evolved into by wishing those I pass a Merry Christmas. After all, if I am wished a Happy Hanukkah or Happy Kwanzaa or whatever by some one that observes those holidays, I am thrilled. It is a compliment to me that someone cares enough to impart a greeting on me that is based out of a belief that they hold dear. At the same time if I wish a dear friend or just a passé- by a Merry Christmas, I hope they take a moment to consider that I am passing on my joy and care enough on to them.

Wednesday night I made my occasional trek down to read “bedtime” stories to the unfortunate segment of our society that find themselves housed in what we used to call Juvenile Hall. I really can’t remember what it is called today. Certainly the name changed at some point in response to some “political correct” consideration. It is likely that some of those kids are of a background that doesn’t observe the Christian Holiday under consideration. However, I don’t think that they really cared. I think that it is reasonable to assume that they were happy to just have someone who cared enough to take the time and effort to be there at 9:30 PM.

Speaking of which, I am too old to have enjoyed “How the Grinch Stole Christmas” as a child, and somehow it probably skipped much notoriety when my children were young. At any rate, I don’t believe I ever read it aloud before. Although I also read Clement Moore’s “A Visit from St. Nicholas” that night, I discovered what a joy it was to read aloud from Dr. Suess’s story of an awakening of joy.

Anyway, I think that I’ve rambled long enough, so I’ll just close with

Well...in Who-ville they say that the Grinch's small heart grew three sizes that day! And the minute his heart didn't feel quite so tight, He whizzed with his load through the bright morning light and he brought back the toys! And the food for the feast! And he...

HE HIMSELF...! The Grinch carved the roast beast

As always, you bring a smile and chuckle to these pages. Yes, let's take one another's greetings in the spirit of the season and not get hung up on wording. As for your reading to the incarcerated youth, good for you! What a thoughtful and appropriate way to celebrate the season and spread goodwill!

I saw a bunpersticker on a truck yeaterday: "Political Correctness is Intellectual Fascism!"

That person with the bumper sticker probably had some specific beefs, but the sticker doesn't tell anyone what they are. Whatever--goodwill to people with bumper stickers, too!