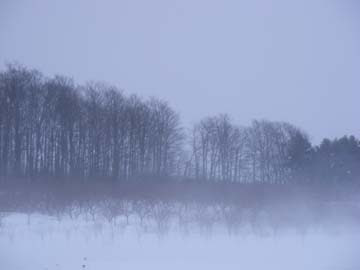 The power is still on. We have lights, furnace, pump, and I’m up in the dark, appreciating lights and furnace (and coffee) and trying to shake off the willies. It will be dark outside yet for a couple more hours, so neither Sarah nor David has any interest yet in “starting the day.” I have only one chapter left to read in Ulysses but am saving it, like the one last chocolate in the box, to savor later on. In a little while, I’ll probably drag out business records and begin year-end bookkeeping, even though it’s three weeks to the year’s end, because why waste time I could use productively? Other possibilities if, as is very likely, we spend today, Blizzard Day 3, socked in here at home again: address New Year’s cards; write more letters.

Wednesday evening I was in a Zen frame of mind (pretty rare for me), and throughout most of yesterday experienced quiet contentment, having bowed to the inevitable, but I woke uneasy this morning in the dark. A couple of my favorite bloggers, Gerry over in Antrim County, across Grand Traverse Bay, and Kathy up in the Keewanaw (Upper Peninsula), have posted pictures from along their snowy roads. I haven’t seen a road since Wednesday. Will I ever see a town again? Get to the post office to pick up and send out mail? It isn’t that it’s been such a long time—it hasn’t—but the uncertainty, the inability to plan and act that hangs over me like the sword of Damocles. The marine radio (most reliable local forecast, in my opinion) last night was predicting not only continued snow but continued wind, and I listen to the wind the way my grandfather once, on a long road trip, listened, silently and intently for a long, long time, to what he thought was a strange engine noise. Finally he gave voice to his concern and was very relieved when I said, “This noise?” and informed him, demonstrating, that I’d been tapping my foot. The sound of the wind around our old house, however, is the sound of the wind. Nothing else. And there are no other outdoor sounds.

Later on, if I make my fumbling way through the drifts (why have I never in my entire life had snowshoes?), around the barn, I can look up the hill to the southwest and see an occupied neighboring house. There are lights far to the northeast, also, across fields and new orchards, and out closer to the road a third neighbor, the closest. Our telephone is still working. I’m still able to e-mail and blog and network. This is “isolation” 21st-century style, and I know we’ve got it easy. Last night as I worked on my laptop, the two of us sitting in our respective reading chairs on either side of a table piled high with books and magazines, NPR on the radio, David asked what I was doing. “Working on digital photographs,” I told him. He observed that long-ago occupants of this old farmhouse would have been spending the evening the same way we were. “What do you mean?” I asked. “Sitting around listening to the radio,” he answered. “Oh. I thought you were joking that Old Joe would have been working on digital images during a blizzard!” It’s the same and different, different and the same.

I miss my bookstore. My next UPS delivery of new books ordered won’t arrive until Monday or Tuesday, and I didn’t have shoppers crowding in before the blizzard, but I miss being in the shop. Miss my Christmas tree. Miss “messing around with books” (the way the Rat loved “messing around with boats”) and never knowing who might walk in next or call on the phone. The contrasting images at the top of the blog tell the story: outdoors, cold, forbidding and monochromatic; indoors, warm, colorful and inviting.

For now, the wind holds us captive. The roadblocks are literal, snowdrifts continually shifting, treacherous as desert dunes in a sandstorm, forbidding in their apparent innocence. Trackless. 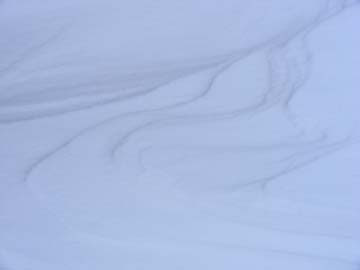 Feeling trackless IS uneasy. I hope you're able to get out this weekend.

Dawn, thanks for stopping in! I feel like the shipwrecked guy on the tiny island with the single palm tree, grabbing at a bottle that's just washed up on the sand and finding a note in it from the outside world! Though he would be throwing the bottle with the note out TO the world, wouldn't he? Never mind. It's still good to get your greeting.

The photos are beautiful. Staying inside, away from bookstore, dog and people friends, receiving mail etc. isn't. I echo Dawn and hope you are able to leave the house by weekend.

Late-breaking news: the plow was here and cleared a path down to our house! We're going to gear up, head out and see if we can back the van up from where it's stuck (plow had to go around) and reach the road. This is far from a sure thing, so everyone cross fingers and toes for us, and we shall see what we shall see.

Dear David: Pamela should have a pair of snowshoes at the very next gift-giving opportunity.

PJ, I was just thinking this morning that the snowdrifts looked like dunes. If the wind ever stops I'll have lots of interesting things to photograph. When. When it stops.

Oh Pamela! Well, first of all, I admire that you entered that Zen-like state of quiet contentment. Until, of course, that uneasiness sparked. I echo Gerry in that you now need a pair of snowshoes. For peace of mind, if nothing else!

Loved the story of your grandpa, too, with you tapping your feet.

P.S. Back to the Zen-like contentment...wonder what it would take to maintain that through something like a whole week? (Heck, why not a whole year?) Wonder why we get attached to our uneasiness. On that note, time to go on a hayride... Hope you figure out a good escape route today! And thanks for linking our blogs. :)

Kathy, I am happy for a Zen day once in a while. You're going on a hayride today? Sleigh or what?

My good news is that David and I are in Northport today, the wind has stopped blowing, and the sun is shining! I think my mood today is too happy and excited to be called Zen-like! I'm in a state of mind that cannot express itself without way too many exclamation marks!!!