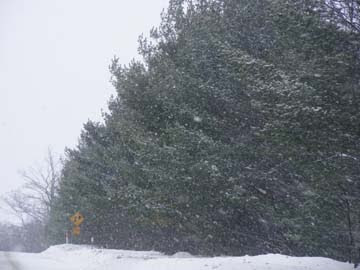 This was our road to town on Sunday. There was enough snow to be beautiful but not enough to make driving treacherous (in our township, at least). I'd been in a tizzy at home on Saturday evening. We will not have enough cookies. No, there will be way too many. Not enough, too many, not enough, too many. ("Food anxiety" was the knowing diagnosis of one friend in whom I confided. Apparently I'm not the only one who experiences it.) Back and forth went my monkey mind all night, unable to settle on one foolish worry or the other. Everything turned out fine. 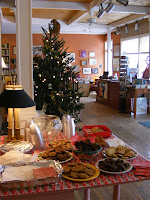 David took me to town early. Things to do! Clearing snow from the door, sprinkling melting particles (what on earth are they, if not salt?), arranging chairs and cookies and mixing the punch. There were plenty of cookies, as it turned out—more than I would have needed but nothing like mountains of unwanted and rejected refreshments, though there are plenty of homemade gingersnaps left and even some of the yummy butterscotch bars, my first try on those and a big success, if I do say so myself. 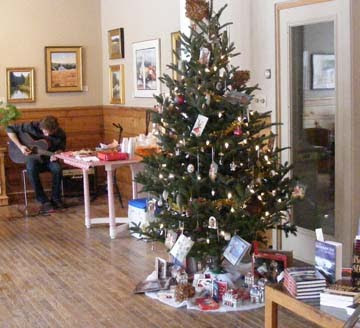 Ben Wetherbee came early to set up, also. His guitar music was perfect for the occasion. He made my day and made the party! Whose brilliant idea was it, anyway, to have him entertain? During most of the open house, there was a nice crowd at his end of the room. David kept telling everyone, "That guitar he's playing, he made himself."

A late addition to the scene was a table of beautiful scarves from Flying Cat Beads. 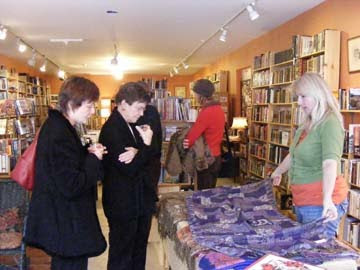 Alice enjoyed showing and selling her wares, and people loved the scarves.

Plenty of people showed up. They loved the music. They ate cookies. They visited and browsed and talked and laughed, and many bought books. It was good to have so many old friends and new under the roof at the same time, and I loved introducing to each other people

with lots in common who somehow hadn’t met before. 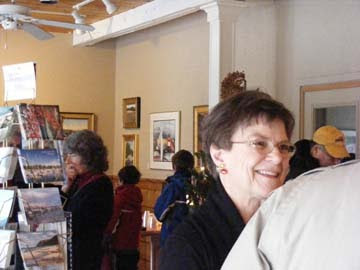 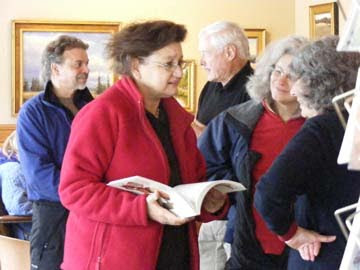 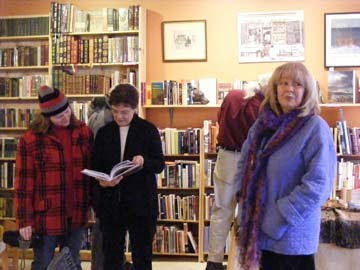 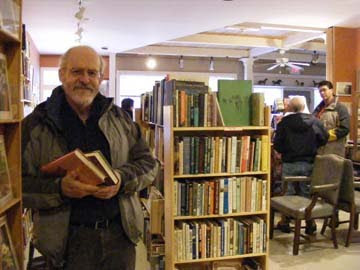 The only aspect of the event that didn’t get any action whatsoever was the free gift wrap. No one availed themselves of wrapping paper or tags. David told me later that he thought the artful arrangement of supplies might have kept people from wanting to “mess it up,” but at least one buyer admitted she had found a gift for herself (I don't think she was the only one, either), so that didn’t need wrapping. At any rate, I’ll leave the paper-and-tag table as is for the next four days. After all, we could still have last-minute shoppers wandering in who would be happy to wrap their purchases before taking them home to put under the tree. And maybe I’ll put a plate of cookies on the wrapping table, too. Sweeten the deal, as it were.

It was wonderful having so many friends come to the party! Wish all my friends and family could have been there!
Posted by P. J. Grath at 7:56 AM

One of the people in my blogger list was there. You can see Karen in the 4th and 6th photographs. She writes "Lake Effect," a very fun and thoughtful blog.

Don't get stuck in the snow again this week, Gerry. Once a week is your limit! Merry Christmas!

Looks like fun! What a good idea to have a wrapping station, especially with cookies! Merry Christmas and Happy New Year to you! :-)

And I loved it! Met some people I had been told by others I should meet and it figures I would meet like-minded souls at Dog Ears. Plus the thick orange volume of Chinese poems (for me) a bonus. Keep putting all the best ones on the top shelf for me to find!

The gift-wrapping table saw some action today. (I should have taken a picture.) Two couples from Louisiana found us by way of my blog. We all had a long, lively visit while they hunted for and found books they wanted, and one of the women was very happy to gift-wrap her purchases before heading back out into the snow.

Karen, I'm glad you found that book of Chinese poetry and hope you will enjoy "The Scholar in the Narrow Street," a poem that always, perversely, makes me laugh. Try it and see how you respond.

Sounds wonderful...wish I could have attended! I always have that "not enough/too much" discussion too whenever I entertain. It's probably a cook's universal problem. Regardless of how many times we do these things!

I wish you could have been there, too, Dawn. Someone asked me if I ever did a summer open house. We did one in late June 2007, I think it was, when the Painted Horse Gallery first opened, but there was no Christmas tree.

No rule that says you can't have an open house WITH a Christmas tree in June....except I guess those pesky (um profitable) tourists might wonder.... :)

Not to be morbid, but I have said for many years that if I am ever on my deathbed in a hospital, I want a decorated Christmas tree in my room, whatever time of year it happens to be.