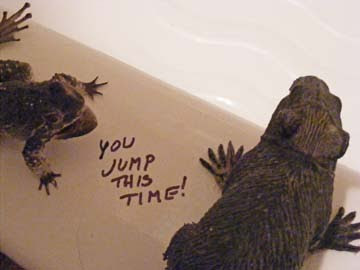 Here’s one of an infinite number of possible images I could have chosen to answer, in very small part, the question of what it’s like to live with an artist. You expected maybe paintings? Yes, we do live surrounded by beautiful original paintings, but at any moment, without warning, a quirky installation may appear. The image above contains two of our plastic bathroom animals, a rat (missing one hind leg: I tried to photograph him so as not to showcase his infirmity) and a frog, posed on the edge of the tub. The rat is looking dubious, and the frog, David explained to me, is taunting the rat, hence the text: “You jump this time!” Then he, David, tells me not to worry about the magic marker on the tub. “It’ll wash off.” I don’t even care! Is there any other woman in the world whose husband is so full of surprises?

I’ve rather neglected the world of publishing lately. The daily newsletter “Shelf Awareness” has been full of stories I haven’t shared, many of them having to do with electronic readers, behemoth online sellers and big box retail strategies. I don’t even like to say the names aloud, much less publish them here. I figure they get enough publicity. The first year (1993) David and I opened our little bookstore-in-a-shed and put up the sign, DOG EARS, a constant buzz came to our own (human) ears as we worked on stocking the shelves. The hum went, “Dog Ears, Dog Ears, Dog Ears!” People were trying to figure out what it meant, but they also just seemed to like to say the name, and that’s what I like to hear!

I do need to share some happy news from the wider book world, though, and that’s about this year’s selections for Michigan Notable Book awards. Jim Harrison is on the list for the sixth time, this year for The English Major, and a very limited number of signed copies are still available at Dog Ears Books. Do you need a gorgeous Michigan coffee table book with real historic significance? That would be the Notable choice A Picturesque Situation: Mackinac Before Photography, 1615-1860, and we have that, too, along with David Small’s graphic novel memoir, Stitches; Donald Lystra’s haunting first novel, Season of Water and Ice (signed copies); Mardi Link’s Isadore’s Secret: Sin, Murder, and Confession in a Northern Michigan Town (signed copies, and this is a Leelanau true story); Michigan’s Columbus: The Life of of Douglass Houghton, by Steve Lehto (something else for the Michigan historian on your list—and is the author related to the people who make the best pasties in the U.P.?); and Bonnie Jo Campbell’s new collection of short fiction, American Salvage.

Will books disappear from the world? Not from my life, and certainly not this holiday season in Northport.
Posted by P. J. Grath at 8:12 AM

As Mrs. Uhdd would say, we are spoilt for choice. And I am not scheduled to work on Sunday . . .

Okay, I should know who Mrs. Uhdd is, shouldn't I? But you need to give me a clue. Or I could cheat and Google....