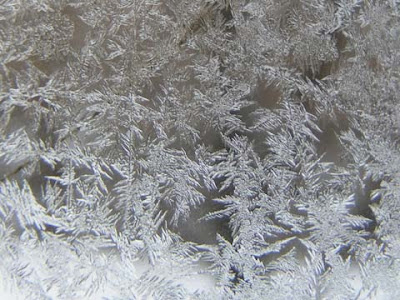 “Everything is temporary!” That’s one of my favorite movie lines. It’s from “Moonstruck,” and it’s the father’s response to his daughter’s defensive answer to his earlier question that the pinkie ring she’s wearing does, too, constitute an engagement ring because it’s temporary. Frost patterns on winter windows are obviously temporary. Can you see, through this second shot, the outline of our barn? 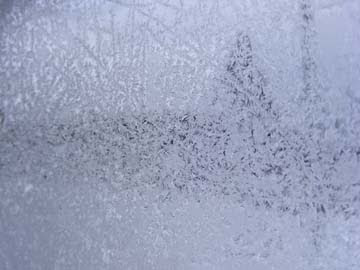 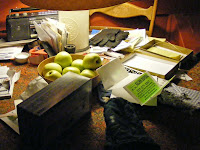 It is my earnest resolve that the chaos on our dining table be temporary. Last night I looked at it and thought, “I’m as bad as my dad!” After we kids had left home, he began treating the dining room as his office and the dining table as his desk. I’m afraid David and I are prone to the same bad habit, but it seems kind of a cheerful clutter over the holidays, whether it’s cards come in or going out, cookbooks and bowls (last week) or whatever. 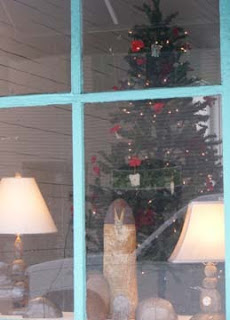 Businesses often outlast their locations, with no pattern to the changes. Here’s another peek through the window of the new Nature Gems location, where I noticed this morning they have put up a Christmas tree, though the move from the corner is far from complete. 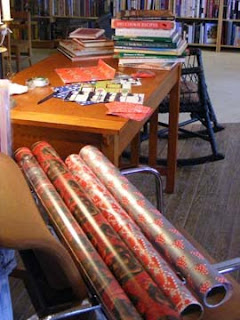 At the bookstore, I’ve limited wrapping clutter—no apology!--to one table, and I sort of like the look.

What do my scenes of chaos have to do with patterns? Antipodes, antitheses. Make of it what you can or will. There isn't much pattern or order to my thoughts this week. Recent big accomplishments, however, include finishing Stendahl's Le rouge et le noir (in time to add it to my 2009 list of books read) and reaching the last chapter of Joyce's Ulysses. I thought of saving that chapter for New Year's Day but then realized it couldn't go on this year's list if I did that. So I'll give it to myself as a present on Christmas Day. Molly's soliloquy! What a gift!
Posted by P. J. Grath at 7:41 AM

Forgot to tell you - Matt is trying to read or did read? Ulysses. We discussed the difficulty of reading the book alone and agreed your reading it in a book group made much sense.

I first struggled through it on my own at age 18, as a freshman at U. of I. I'll be posting something else about this book soon, having to do with patterns.

I think about your bookstore a lot. Yesterday, as we drove back up north (from visiting my folks in the "Thumb") I wished it would be viable to detour to Northport. Alas... I love the thought of you wrapping gifts there. The coziness of it. As for Ulysses...probably won't be struggling through that one. Although you never know!

Kathy, we are not on the direct route from the Thumb to the Yoop, that's for sure. Where in the Thumb is your family? My husband's mother grew up in Sebawaing.

Never say never when it comes to literature. I vowed for years that I would never read Stendahl and am happy to say I broke that silly promise to myself. Same with Proust. The older I get, the more I appreciate what I call "slow books," reading that stretches out over a long course of weeks.

My mom and dad live in Yale, about 20 miles from Port Huron. My brother does have a cottage up in Bellaire, so that's probably a little closer for a someday-possibility! (That's where Gerry and I met back in July.) I have read some classics and really enjoyed them, but not in a long time. Maybe you'll inspire me...?

David, my husband, graduated from St. Clair High School. He says a lot of people from St. Clair moved out to Yale. But yes, Bellaire would be a lot closer for a meeting spot, if you come down in spring. Otherwise, we usually go to the U.P. in September, though we only got as far west as Munising this past visit.

Classics are classics for good reason. I was very pleasantly surprised by how much I enjoyed BLEAK HOUSE, by Charles Dickens, last winter. He could really tell a story, and he could be pretty funny, too. Another challenge for yourself? One a month? Just a thought....

Uh oh. You've given Kathy another challenge to ponder. I can see it now . . . Opening the cover and reading the classic: Twelve months of slow books.

Combine it with slow food and we have a winner. This is going to be a good decade.

I'd love a full 12-month "slow year," but that's too much to ask. Instead, once we get down to Florida, I'll be devouring books at top speed to make up for the busier months at home and bookshop. Not many of us can take an entire year off like the EAT, PRAY, LOVE author. Books! Vicarious living!

Another challenge! Oh my goodness...will have to think about THAT one. Say, where in Florida do you go? Not anywhere near Fort Myers Beach by any chance?

We will return to last year's winter place of refuge, little Aripeka. You can see some of it if you look at my posts from late January through early April 2009, e.g., http://booksinnorthport.blogspot.com/2009/01/avian-and-other-distractions.html. I think Fort Myers is considerably farther south. We will be in the sawgrass, not on the beach. :)