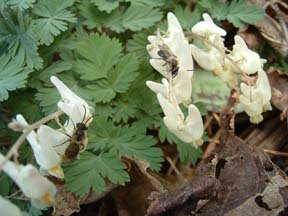 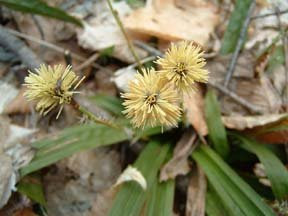 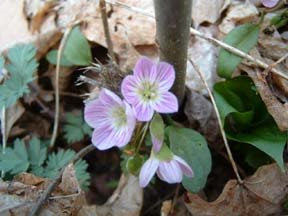 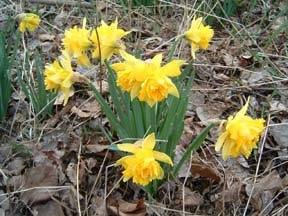 An otherwise unremarkable sapling popple at the edge of the woods was rubbed bare on one side, probably by deer rubbing mossy antlers against it. Wonder if their antlers get to feeling itchy this time of year. On the other side of the hills, where the undulating wooded ridge comes to an abrupt and slightly eroded drop, a line of dead leaves reminiscent of the art of Andrew Goldsworthy crossed the verge between wild and cultivated land like a bridge constructed by snowmelt running downhill. And the spring wildflowers! More already than I’d expected to find, every day bringing a new, quiet, peaceful explosion of life. Getting outdoors more often is but one of the serendipitous aspects of bearing responsibility for a young, strong, active, energetic dog. (Sarah = serendipity, in my private lexicon.) The calendar has spring beginning a month earlier than it bursts forth here Up North....

My sister and brother-in-law in Springfield, Illinois, felt the southern Indiana earthquake the other morning. “Yes, it woke us both up,” she wrote. “It was quite strong and seemed to last a long time. Our bed was shaking like crazy. I stayed in bed (what you're supposed to do though I didn't know that) just to truly feel the sensation.” She said a friend transplanted to the Midwest from California found the event quite “normal.”

In a different vein, independent of seasons and weather, David’s son in Minneapolis has entered the wonderful world of online video, and not just with songs. Against the background of his own guitar music, Adam reads from his book, THE FAULTY CARPENTER, while illustrations from the book play on the screen. Way to go, Adam!

And to reach even further afield for something unrelated to spring, I found the quotation below unfortunately used as an example of "absurdist" rather than "existentialist" philosophy:

You will never be happy if you continue to search for what happiness consists of. You will never live if you are looking for the meaning of life. - Albert Camus (1913-1960)

Don’t believe everything you read “out there,” any more than you’d believe anything just because you read it in a newspaper.

Coming tomorrow: A review by Bruce Balas of John Grisham’s AN INNOCENT MAN.
Posted by P. J. Grath at 8:44 AM

What's that second one, Pamela? I don't think I've ever seen it.

When I was little I loved two flowers: arbutus and cowslips. Cowslips are abundant, but I've smelled arbutus only in memory for many years. I'll make a donation to the favorite charity of anyone who can tell me where there's a patch!

I tell Miss Sadie she saved my life. She gives me the quizzical look and suggests a walk. Having to walk her - and now the Cowboy as well - gets me out and head-cleared twice a day every day, bless 'em.

Spring beauties are cuddling up to other plants, leafy confusion reigning. Gerry, you can find trailing arbutus over at Grass River, northeast of Alden. I was there with two friends years ago, and my quick-eyed naturalist guru friend Kathie spotted the tiny flower. As for the mystery wildflower, who can name it? I should be able to, but memory is failing me, as are the wildflower guides I've perused. First one to come up with the correct name wins a free copy of Lund's MICHIGAN WILDFLOWERS IN COLOR! Keep it if you don't already have it, or give it away if you do.

I'm on the case! Be thinking about the favorite charity.