A while back I made a premature observation in a reply to a comment on this site. The book in question was MEMOIR IN TWO VOICES, by François Mitterand and Elie Wiesel, Mitterand’s memoir, for which he asked his friend to join him in dialogue. Perhaps Mitterand wanted a collaborator of sorts because of the state of his health, or it might have been that the two men, in friendly, informal conversation about their very different lives, came up with this idea as a way of putting Mitterand’s life in a more meaningful historical context. At any rate, my initial and very false impression, gleaned from glances at the first few pages, was that he and Wiesel were talking past each other. Such is not the case at all. Not only do both voices come through, along with Wiesel’s deep questioning of Mitterand, but throughout the conversation their careful listening to one another is evident, as well as their implicit appreciation for one another’s strengths, gifts and experiences.

The idea of a memoir produced by two people, the memoir’s subject and a friendly interlocutor, is foreign to the American mind, but it is typically French. I don't mean this specific form but the more general creative approach to all established forms, artistic and otherwise. I remember an exhibit of art at the Grand Palais where the only thing all the pieces had in common was that they were influenced by China or Chinese art. No particular period of art or group of artists or specific style—simply, this painting or this vase or this fabric design was Chinese-inspired. Gallic invention of new forms is an art in itself.

MEMOIR IN TWO VOICES arranges the Mitterand-Wiesel conversation into thematic chapters: Childhood, Faith, War, Writing and Literature, Power, Special Moments. Elie Wiesel’s reputation as a writer is world-wide. The character of Mitterand, known internationally as a French head of state, is the more surprising. The depth and breadth of his knowledge is impressive, his self-knowledge almost more astonishing. We do not meet in these pages a clever humorist or mystical poet; the surprises are quieter and build more sedately. Here is, we feel more strongly with every page, a man of substance.

Mitterand, wo died in 1996, was a man clear about his personal and political ambitions. He was also clear about his individual limitations and the limitations on any individual in a position of power. And yet he was not a pessimist. Agnostic at most, in terms of religion, he had enough faith in human beings to hope that mutual self-destruction could be avoided.

The lives of Wiesel and Mitterand took place on the world stage. My own is small and close to home. Here is a large rock between orchard rows and some hedgerow litter that shows clearly that a Deere was here. 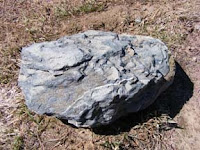 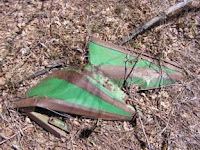 Those are two names I have not thought of in a while.

The current French leader has, to me, a name that is rather hard and non-French

The French language and names that sound French to us originated in the region around Paris, and it's surprising to travel through other regions of the country and find very different kinds of names. Sometimes I speculate on which French names sound okay in English and which don't work as well. The typical French boy's name Didier is one that American parents would probably hesitate to use.