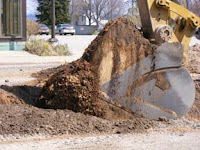 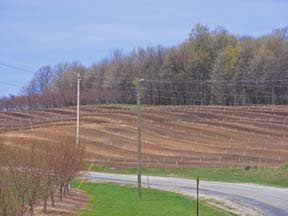 Call it ‘earth,’ or call it ‘soil.’ A lot of it gets moved around this time of year. With the sewer work in downtown Northport, heavy machinery, expertly handled, makes amazingly accurate and fast work of digging, while orchard tractors out in the countryside move with deliberation, upslope and down, cultivating natural and enhanced contours of the land around newly planted young whips of cherry trees. My daily drive from home to town takes me past Norm and Pauline Neilsen’s mature orchards, where I catch my first sight of blossoms beginning to show every spring. 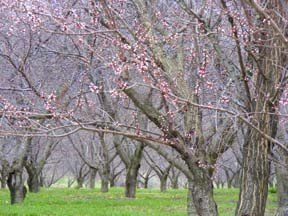 “Anyone can see whether the land’s being properly worked or not,” says one peasant in the book CHINESE LIVES: AN ORAL HISTORY OF CONTEMPORARY CHINA, ed. W. J. F. Jenner & Delia Davis (NY: Pantheon, 1987). “You can’t hide the crops: they’re like the farmer’s face.” Louis Bromfield made a similar observation in Ohio over half a century ago, when he came home from Europe to take up the “new” agriculture, a kind of precursor (to oversimplify the history of scientific farming) to what later developed as organic farming. I need to re-read PLEASANT VALLEY and MALABAR farm to refresh my memory of the details, and I want to find statistics, too, for soil lost annually in Michigan to erosion, a number I remember back in the 1980’s as measured in tons per acre per year. How much new soil is produced by a single earthworm in a year? And what about the new deserts appearing in China, where soil washed away by flooding after huge tracts forest were thoughtlessly “harvested” to make cheap furniture for export? I hope to do justice to these important topics in the near future.

Today, however (Thursday), Waukazoo Street is open again (give these workers credit: our street was only closed for two days!), and tomorrow (Friday) the bookstore will be closed, as the Dog Ears Books team travels south for the Senior Spelling Bee at Gilbert Lodge in Traverse City’s Twin Lakes Park. I have final grades to calculate for my NMC students this weekend, and Tuesday I’ll be part of a panel at the Portage Public Library on “What Some Are Reading,” looking at book club selections around the state. (When asked to participate, I first her the request as “What’s Summer Reading?” Some book clubs, though, take summers off! The old U.P. joke goes, “We have two seasons here, Winter and Company.” Well, who doesn’t want to be Up North when the sun is shining and blue water sparkling? Yes, it’s a busy time, but it’s what we live for.) So don't hold your breath for my ag history report.

Congratulations to Joe! And Pamela, how funny it was to see that you'll be at the Gilbert Lodge.

I know--Gilbert Lodge! To those of you not in on the joke, that was Deborah's and my maiden name.

I await the Ag History report. Meanwhile I've distracted myself. Mrs. Uphilldowndale tagged me in the blogging "7 Things" game - and I'm afraid I tagged you. There is a disclaimer! It is not necessary to play! But I hope TLV readers will enjoy their virtual trip to Northport.

Gerry, will I get a clue on what to do and how and when?