Book Review: FOR THE LOVE OF A DOG; THE OTHER END OF THE LEASH 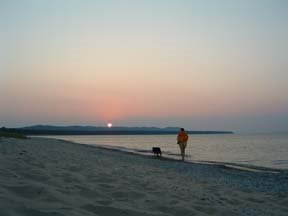 Long after Nikki, our old dog, had completely lost her hearing, I kept up a running, one-sided pseudo-conversation with her. “She knows you’re talking to her,” people (well, some) said to reassure me, but I was mostly just talking to myself. Though I prefaced and interspersed my monologues with Nikki’s name, they had little to do with her. I was just being a human, doing what humans do.

After discovering “The Dog Whisperer” on the National Geographic channel and becoming ardent fans of Cesar Millan’s work with dogs and their owners, I began to think for the first time about talking to dogs. Speech, obviously, isn’t how dogs communicate with each other, and when you think about it there’s very little talk necessary in dog training. Kipling’s first Jungle Book, the story of Mowgli, the boy raised by wolves, gets it right. It’s the monkeys, not the dignified wolves, who make all the noise, and we humans, the monkeys’ relatives, are chatterers, that’s all. I’d never needed to verbalize nonstop to Nikki, and continuing to do so when she’d gone deaf was even more pointless. Only late in her life, after reflecting on human-dog relationships in general, did I begin to experience fully the deep, peaceful bond of companionable silence with my dog—and what a relief and refuge it was, leaving the rest of the busy, noisy world behind! She had never bombarded me with questions, never asked, “What’s wrong? Are you mad about something?” if I’d been quiet for a few minutes. Just being together, indoors or out, had always been enough for her. When I stopped talking to her—well, for the most part—I became more peaceful myself, more calm and centered.

Patricia McConnell’s books, THE OTHER END OF THE LEASH and FOR THE LOVE OF A DOG, are fascinating because they are as much about humans as about dogs and because they address the lives humans and dogs share. Because both species are mammals, we share many common traits and behaviors; because we are primates and they are canids, there are important differences between us.

Dogs don’t talk. They don’t hug. They like to roll in stinky stuff. Strange dogs sidle up to each other and smell each other’s rear ends rather than approaching head-on to shake hands. But dogs and humans are sociable creatures. They enjoy the company of each other, as well as that of members of their own species. They show emotion. Both species remain playful into and through adulthood. We even have in common a specific affinity for games involving throwing balls! McConnell’s cautious bottom line seems to be that despite the differences, most people would do better with dogs by anthropomorphizing more rather than less.

“Surely the most common fear in all mammals is the fear of being hurt. This isn’t surprising when you think about it—being hurt isn’t going to help an animal pass on its genes. It’s a shame dogs can’t more easily tell us when they’re hurt, or afraid of being hurt, because I think it’s a common motivation for what we think of as aggression.”

Do you want someone trying to give you a backrub when you’re concentrating on a work-related problem? Dogs may like petting, but that doesn’t mean they want it just any old time. Do you get crabby when you’re tired and hungry? So do dogs. When your parent or spouse or child calls your name, do you drop whatever interesting activity you’re engaged in to run instantly to that person? Does it make you nervous when a stranger rushes at you with arms outstretched? On the debate (is this still debated?) over whether or not dogs have emotions, McConnell comes down firmly on the affirmative side. Even pigs, she says, display anger, and how quickly a pig gets angry and how angry a pig gets depends on the individual pig. Same with humans, same with dogs.

I said in a previous posting that the books I’ve been reading lately have all seemed to connect to each other. McConnell directly references Malcolm Gladwell’s BLINK. A lot of what we learn from her books is how much dogs pick up from unconscious signals we don’t even realize we’re giving. Just as important is the very specific information she gives on signals we can learn to spot in dogs--for example, when a growl is part of play and when silence is dangerous.

In FOR THE LOVE OF A DOG, McConnell makes an important point about mental exercise for dogs: “We’re not the only animals whose brains need to be stimulated,” she writes. And, brains being physical organs, mental exercise is also physical exercise. “Fifteen minutes of trick training and fifteen minutes of playing fetch can do a lot for a dog who’s been hanging out all day waiting for you to come home. If you don’t have thirty minutes at least a couple of times a day, you might, just perhaps, want to rethink having a dog in the first place.”

These books are not dog training manuals and are not intended as substitutes for training guides. That’s McConnell’s caveat. My perception is that the priceless tips and information this author-trainer-behaviorist gives, along with the many stories--of her dogs and her clients’ dogs--that make the advice come alive, may just be more helpful than a stack of training books. Reading THE OTHER END OF THE LEASH and FOR THE LOVE OF A DOG, you are not only told how to teach your dog to come to you when called but also told about many ways you may unconsciously undermine the lesson you’re trying to give.

One has the feeling in reading these books that the writer is fully engaged with every sentence. Sometimes she stops herself, looks at a word she’s just used, and points back to it in astonishment, saying, in effect, “That’s just what I’m talking about!” She doesn’t cover up her own mistakes, either, but offers them as lessons for others.

A warm-hearted, dog-loving person. An engaging writer. A scholar and researcher well-grounded in the field of animal behavior. An honest woman. What more could you want? These books are definitely worth their cover price many times over!

[Postscript: Okay, it is reasonable to expect the blogger to get the author's name right in a book review. I've corrected my error now and can only excuse myself by saying that a beloved third-grade teacher was named Miss O'Donnell. I don't know where else that 'O' would have come from.]
Posted by P. J. Grath at 5:44 AM

I have given considerable thought to these issues while wandering about talking to the dogs, or to myself, depending on your view of the matter. I've concluded that Miss Sadie is making a genuine attempt to learn Peoplespeak, while the Cowboy is resolute in his determination that I learn Doggish. From this I gather that Miss Sadie is the more cosmopolitan.

When my sister had her second son, I realized that 2 was something entirely different from 1 x 2. These days, Gerry, I have the same awed admiration for people in multiple-dog households.

The trick is to keep a cat. Miss Puss keeps 'em in line.