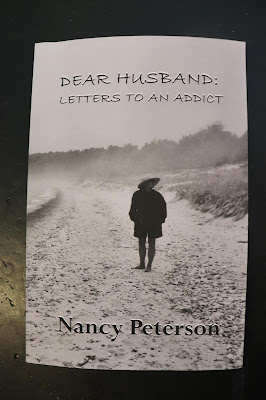 A local friend who is now a new author will be signing her new book in my shop next Saturday (9/28, 1-3 p.m.), and Nancy brought me an early copy of her memoir this past Saturday. My husband and her late husband were friends. Patrick and David appreciated one another’s minds and enjoyed sharing conversation and occasional short road expeditions close to home. David and I were not altogether blind to the fact that Nancy and Patrick’s marriage had problems (whose doesn’t?), and they in turn were aware that we had been through plenty of drama ourselves. When I began reading the first few pages of Nancy’s book aloud to the Artist, however, we were blindsided by its revelations.

Nancy’s Peterson’s memoir, Dear Husband: Letters to an Addict, opened our eyes to a personal world that we had never suspected about this attractive couple we saw regularly around the village and once in a while (although only a couple of times in each other’s homes) on social occasions. We thought we knew them. It turns out we knew only the merest fraction of their personal, marital, and family world.

Others knew more, as is apparent in some of Peterson’s “letters,” which are in fact ongoing journal entries she began addressing to her husband in September of 2009 and continued until after his death in October 2016. What is also apparent, though, is that even close friends, knowing of the husband’s alcohol and drug addictions, had trouble understanding why Nancy chose to remain in the marriage.

But that’s just it. We only see other people’s lives from the outside. Others may confide in us, but we have only their reports, never their experience. We never know anyone else’s family from the inside — or even our own family from the experience of the other members of it!  And the same is true for other people’s marriages. Going deeper, Nancy Peterson’s memoir reminds us that within the marriage itself, between two people who may love each other deeply and passionately, ignorance and mystery always remain. And ignorance and mystery contribute to a world of misunderstanding and pain — though perhaps in other ways they shore up and make possible continued commitment and recurring delight.

From a mood of resentment, the spouse appears in one guise; from a mood of desire, quite another; in a spirit of generous appreciation, something else again, and so on. Where in these various, varying perceptions is reality?

No one is simple. Everyone is a mystery.

Someone I know felt impatience for years with friends suffering from depression until she experienced depression herself during pregnancy. It was beyond her control, and that alone was a striking lesson. Now when she is in a grocery store and witnesses a young child having a screaming meltdown, instead of blaming the mother for bad parenting, she tells herself the child may be autistic, and both child and mother may be doing the best they can.

We are all mysteries, even to ourselves.

Once, long ago, an acquaintance asked me if I thought a third person we both knew might have mental health problems. “I’m not a good judge of what’s normal,” I replied. Growing up the oldest daughter of an alcoholic father also diagnosed with bipolar disorder, I had not found in eighteen years of  family life a solid baseline reading of normality to apply in later life. During spells of darkness, I questioned my own mental health.

My father found his manic-depressive illness an endless source of fascination and loved to talk about it. He would also periodically abuse his prescription medication to maintain the “high” that inspired him to do things such as book a flight from Chicago to Los Angeles on a whim or buy drinks for everyone in a strange bar or, or, or…. He denied his alcoholism for years (if he ever admitted it, I was not informed), aided by convenient misreading of a brochure he was given during one of his periodic hospitalizations, a brochure containing a checklist of maybe a dozen warning signs of alcoholism, taking the form “Do you ever do such-and-such?” My father’s interpretation of the questions was that only someone who answered yes to every item was an alcoholic. He never hid bottles, so could answer no to one of the questions; therefore, he was not an alcoholic and had no problem.

At my mother’s insistence, she and my father once legally separated, but before the waiting period was up that would have granted a divorce, her minister persuaded my mother to forgive and try again to save the marriage, and my parents remained together until my father’s death. In time, advancing age brought a leveling-off of drama. As time went by, my father could no longer drive and so could not disappear for hours or days on end. As he declined in strength, too, he watched more television and drank less and less. Toward the end, the addition of a pair of kittens to the household gave their last years together a new, entertaining, and joyful focus, distracting them from each other’s often annoying ways and irritating habits.

What I appreciate most in Nancy Peterson’s story is the way she depicts not only the repeated disappointments, frustrations, and what feel like downright betrayals involved in life with an addicted family member but also the happy occasions and wonderful adventures she and Patrick had as a couple and with their three children. Also, the deep love and appreciation they felt for what was best in each other. Because all of it was real — the joy and the pain —. And because Nancy chose, again and again, to remain with Patrick despite the pain, all five members of the family had opportunities that would otherwise have been lost to face their own individual and mutual demons and to build loving memories of their years together.

The addict and alcoholic are part of him, but not only him. This man, my choices, our lives together, and the life we built and nurtured in so many ways, are not black and white. They are complicated, intertwined, laden with deep feeling and regard, as well as a shared history.

Next Saturday will be a lively, busy day in Northport, with streets closed to traffic and art and music and dance and food and craft vendors throughout the village. So come on down, and anytime between 1 and 3 p.m., stop by Dog Ears Books to visit with Nancy Peterson, who will be glad to autograph a book for you.

Dear Husband: Letters to an Addict could have been a bitter, tragic story. Instead, it is an ultimately celebratory account of one marriage and the adventurous, strong, successful family created by two imperfect human beings.

And, friends, aren’t we all imperfect, every single one of us?

A sweet, sensitive review-- love takes many forms, even kittens. We are stronger for knowing people like Nancy and Patrick. Thank you for the write-up.

Alexis, I couldn't agree more. Thank you so much for your contribution here.