Cheboygan with a ‘c’ is in Michigan, Sheboygan with an ’s’ in Wisconsin. Both are white European spellings of an Ojibway word, but which one? Does the name come the word for "passage between lakes," "sewing needle," or "place of ore"?

The Artist’s memories of a long-ago night spent on the edge of Cheboygan were unlovely, and so when the two of us had subsequently passed the same way we did so quickly. This time was different. To begin with (and it was a happy beginning), we found the motel pictured at the top of this post, where we had a clean, comfortable, roomy but cozy room and there was plenty of space outside, well off the highway, to walk a dog. We had our choice of restaurants in close range. If only we’d had in-room coffee, I could have stayed for a week, before even seeing the town itself. Initially the Artist was not so sure. He didn’t remember there being “much to see” in Cheboygan. But he agreed to give it a chance. 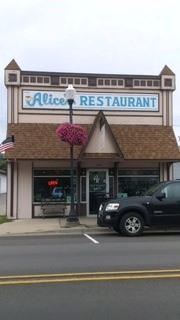 We found a long Main Street lined with businesses, many of them open even on a quiet September morning. Alice’s Restaurant fell somewhat short on its “best coffee” claim; breakfast, however, was nothing short of delicious. You already know we visited the bookstore, because I gave that away in Part I of my story. What really captured our hearts, though, was the Lake Huron shoreline at Cheboygan — like a shoreline in a dream, it was, all reedy and undulating, with parks and open space and a long boardwalk out to a viewing platform. 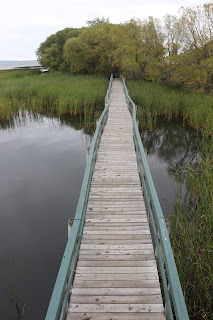 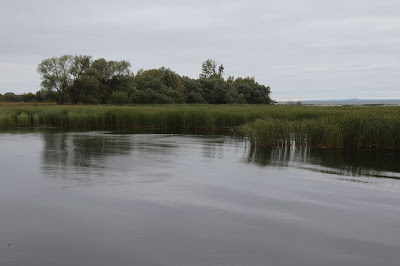 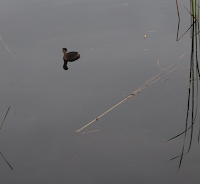 Cheboygan, like Alpena, is confusing to navigate, since its shoreline and river mouth conspire to make a regular prairie grid impossible for more than a few blocks. For true wanderers, of course, irregularity of layout adds interest. So did the town’s houses, churches, and other buildings, both historic and modern. We were glad to see the original Carnegie Library now being used for cultural events and to find a big new library not far away.


My guess is that the old church now called “Huron Street Tabernacle” is the old St. Charles Catholic Church. Just a guess, but an active Catholic Church we saw as we were coming into town, with the name St. Mary’s above the door, is now St. Mary’s/St. Charles, so — . In any case, the Tabernacle is in rough shape.

I did not photograph any of the old mansions or the fabulous old horse chestnut trees we found. Sometimes I need to let my eyes and mind make their memories unaided. But we wandered and circled and poked around until we found ourselves on a road leading out of town, past what looked like an old schoolhouse.


When I consulted the map, I saw that we could stay on that road south until we reached an east-west road that would take us over to Alanson, so that’s what we decided to do. Back on familiar territory, we were happy to stop for coffee at the Dutch Oven Bakery in Alanson (now that was the best coffee anywhere on our trip), and I went a little nuts making purchases before we left — bread (David’s choice), plum bread (out of this world!), jams, and a terrific little spice cookie made there called dry bones, which are very delicious and quite addictive. Beware!


We made one last exploratory stop down the road at King Orchards for apples, and if I hadn’t been so unrestrained at the Dutch Oven Bakery I could have spent much more than three dollars at the orchard store. There’s not much better than a Michigan apple, though, unless it’s a whole bag of apples, and that bag was all we needed to get through the rest of our last day of travel.


So we did not get over the Bridge this time. But getting away doesn’t have to mean going terribly far or staying away for a long time. Four days can suffice and did for us this September. Besides, close to home, a couple of hours are often enough to refresh our spirits….

I have been to the King orchard store. Went there with Gerry a few years ago. Out of Eastport. Could that be possible?

Dawn, I'd call it downright probable!

What a delightful post. I can picture the wonderful adventures the 3 of you enjoyed.

And now I have the restaurant photo from my phone, too, thanks to you, Deborah!

Is there still a knit shop next to that wonderful bakery? Great post!

Must confess I did not notice or seek out a knit shop, Barbara, though I did overhear someone (owner? son of owner?) telling people at a nearby table something of the history of the place, and I think the shop was mentioned. I need to eavesdrop more carefully next time. :)