Wandering Strangers, At Home Wherever We Roam 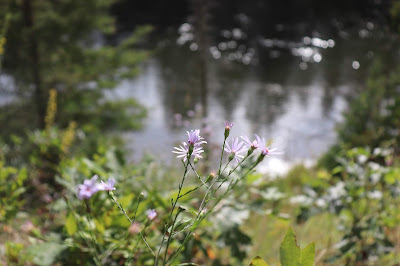 When we left home for a few days of fall getaway, the dominant plants in blossom in my meadow were still the tall, elegant, little grey-headed coneflowers of August. Not a single aster was yet flowering. I know because I looked specifically for the asters, anticipating that last wave of color but happy that the season’s last act still lay in the future, something to look forward to.

As we made our way east, however, following the Au Sable* River east of Mio, I began seeing asters in bloom everywhere. It was as if we had fallen ahead of ourselves, skipping a full calendar week. Does the moderating effect of Lake Michigan retard the arrival of fall that much on the western side of the state? What else could account for the difference, since we did not change latitude or elevation by traveling east?

Whatever the explanation, I noticed something similar in and around Tawas City and East Tawas, where stands of cattails in wetlands were still green of leaf on Tuesday but by Wednesday, as we drove from Alpena to Cheboygan, suddenly (or so it seemed) brown and gold. We were stealing a few days “away from it all,” but time’s inexorable march had not slowed one bit. If anything, it seemed to be speeding up at the same time that the two of us were, briefly, slowing the pace of our life. 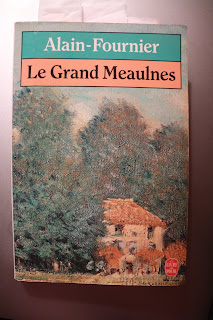 During four days and three nights away from home, while the Artist gloried in the rare treat (for him) of evening television at bedtime (we have not had TV at home for many years), I put in earplugs and curled up happily with Le Grand Meaulnes, the only novel of Alain-Fournier, a writer who died young and wrote no other books. I have seen this novel translated into English under different names, and since one English title given is The Wanderer, it seemed appropriate reading to accompany our own autumn wanderings.

Young Auguste Meaulnes, though, does not set out to “wander” at all when he goes off for a little adventure near the beginning of the novel. He has a clear destination and means to reach it and return to school, but a wrong turn quickly delivers him far from anything familiar, and the road diminishes to more of a track. When Meaules seeks temporary refuge in the hut of an old peasant couple, he tries to ask his way in a roundabout manner, not wanting to admit that he is a stranger in those parts, but the old woman sees his confusion and guesses the truth: “C’est que vous n’etes pas du pays?” [Please excuse missing accent mark.] No, he is not “from there.”

Our September wandering in northern Michigan was more intentional than that of the fictitious French youth. With no fixed goal or end to our little journey, we invented interim destinations from time to time and then chose tertiary roads that occasionally “deteriorated” into what felt occasionally like safari trails, pavement giving way to gravel and dirt, then to softer and deeper sand…. 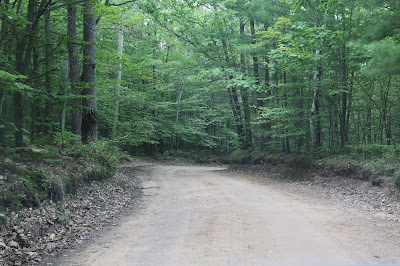 Like Meaulnes, we were not “from” any of the places we visited (although the Artist has historic family connections in the larger general area), but traveling within Michigan with Michigan license plates we roamed with the confidence of residents. (We were very surprised to find, in a restaurant parking lot on the outskirts of one town along Lake Huron, license plates from as far away as Pennsylvania and Texas. Far from home as we were, we were hardly the most unexpected strangers, but it’s clear that everyone is welcome at the Great Lakes Grill in Cheboygan.) And whether we are in Michigan or any other state, the Artist easily falls into conversation. Even when we have traveled together through France, a country whose language he knows only slightly, we did not feel like complete strangers, since an artist is at home wherever he may roam, especially any country with a tradition of art.

Finally, of course, whenever we wander into a bookstore we feel at home. The Book Nook in East Tawas is harder to find than it used to be; however, we followed the website clues, persevered, and received a warm welcome from Heather and Susie (below), leaving eventually with half a dozen new and used books, well satisfied with our visit and ready to roll on north. 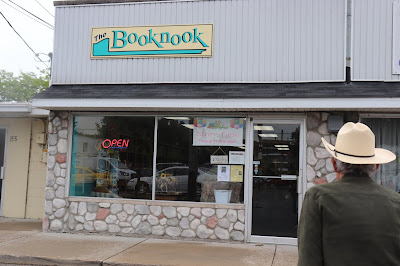 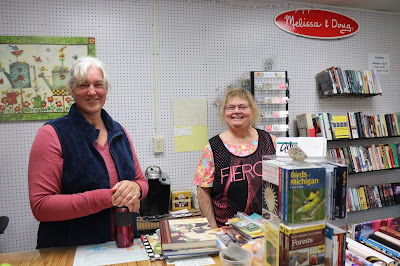 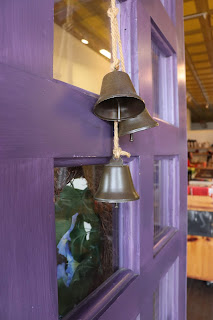 In Cheboygan (I'm skipping a lot here, some of which I'll fill in later with another post) it was Purple Tree Bookstore that made us feel at home, and again we did not leave empty-handed. By next week Purple Tree may have become Blue Roses (new owners are working through a lot of changes), but they will remain in the same location on Main Street, easy to find. The bookstore has a coffee bar, one big table and small ones, and comfortable seating throughout the store. 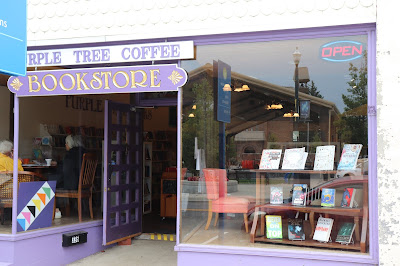 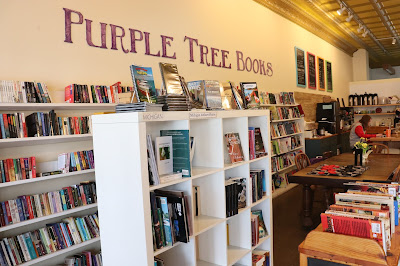 I hope that visitors to my bookstore in Northport, regardless of the distance they have traveled from home, feel as comfortable in Dog Ears Books as I feel in other people’s bookstores, all the little literary oases I am so happy to find along life’s byways, where I am warmed by the sight of shelves filled with books and an owner or employee’s smile of welcome.

Naturally, many of the tiny communities we sought out or stumbled onto lacked bookstores of any kind. Some had a post office and a sprinkling of small businesses, while others had only a name and maybe a township hall, if that. Here are a few of the places we saw along the less-traveled roads of the northeast lower peninsula: Curtisville, Hale, Lincoln, Posen, Metz, Topinabee. Do any of my readers know any of these places? 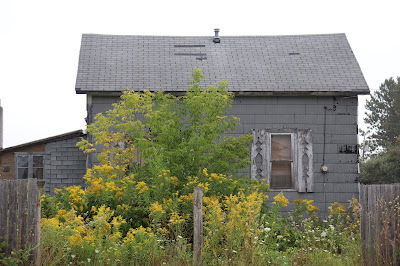 So many sights not recorded by camera or phone! A group of deer feeding in the yard of a remote log cabin. Elsewhere, one group of sheep crowded the doorway of an old barn while another leaning stood shoulder to shoulder against the fence of their pen, all staring off in the same direction. (Looking at what?) Geese in a corral, roused to a squawking chorus of alarm when we slowed down to get a look at them. A dilapidated old lodge resort, slowly but surely falling into ruin, too far gone to be saved.

The larger Lake Huron towns of Alpena and Cheboygan seem to be undergoing a kind of renaissance that has to be beneficial to the entire area, and I’ll have a separate post on those towns soon. We will definitely be revisiting Cheboygan on future trips. There's a town neither of us had seen for years but one with a lot to offer happy, curious wanderers. 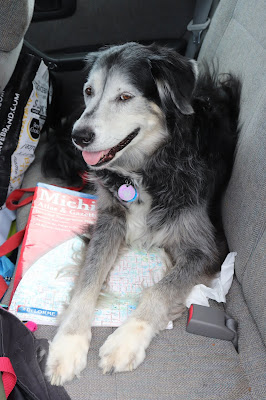 And yes, Sarah had a good time, too. She is a great home dog, a great bookstore dog, and a great travelin' dog!

*I can’t help pronouncing the ‘Au’ in Au Sable as ‘Oh’ though the Artist assures me that ‘Aw’ is the local preference.

Pamela, YES visitors to your bookstore feel very comfortable in Dog Ears Books! We are warmed by your smile and the sight of your books. I can’t imagine a town without a bookstore.
Ty

Ty, THANK YOU SO MUCH! Whenever you walk in the door, my day is brightened!