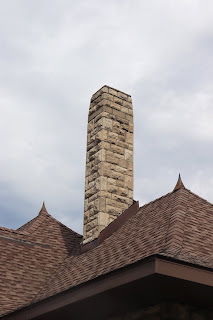 I’m still sorting through impressions and memories of our brief four-day September getaway, and it’s good that I have photographs and maps and other sources of information, because I’m finding it all too easy to forget which day we were where and what town offered what delights. Also, now that a friend has asked me for tips about places to visit and stay on the back roads of the Lake Huron shore, I realize all over again (once more consulting those maps and photos) that much of the joy for me of the northeast corner of the state is that there are no expressways. I-75 runs up the middle of the lower peninsula to Mackinac City, but east and west of that monster, high-speed highway cruising is more intimate. In the northeast corner, only occasional passing lanes widen the highways from their usual narrow, winding ribbon.

We did wander off US-23 several times. For instance, between Tawas and Alpena we left the highway to tour Harrisville, and north of Harrisville we took Lakeshore Drive as far north as Black River, and north of Alpena we ducked inland to search out Posen and Metz. There was our real back roads expedition to Lincoln and of course the twists and turns, while mildly lost, that took us unexpectedly through Curtisville and Hale. But in thinking how to answer my friend’s question, I realize that she doesn’t really need to search out back roads — and wouldn’t find much lodging out there if she did — because most of the Lake Huron shore, at least between Tawas and Cheboygan, is reminiscent of Traverse City 50 years ago. It is log cabins, tourist cottages that look like little Monopoly houses, and one-story mom-and-pop strip motels for miles and miles. That’s what gives the area its charm, as far as I’m concerned.

But there are a few towns large enough to be considered cities, too, namely Alpena, Rogers City, and Cheboygan. 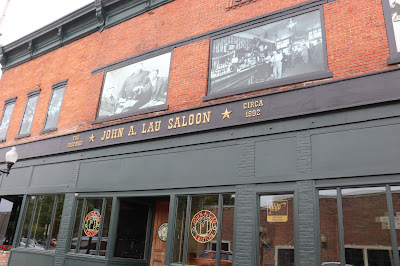 Twenty years ago the Artist and I hit on the idea of escaping early spring cabin fever with a drive over to Alpena. At the time there was a fabulous old used bookstore there (last time I checked, it was up in the Keewenaw, in Calumet — yep, still there) that served as our destination for an overnight trip. We also sought out the John A. Lau Saloon, named for a ship-owning great-uncle of the Artist’s. Two decades ago, Alpena was a pretty sad place — but then, so was Northport as recently as 15 years ago. On more recent visits we have noticed new energy in Alpena (as many return visitors have noted in Northport), and last week we discovered for ourselves the Great Lakes Maritime Heritage Center, an informative, entertaining, and definitely worthwhile stop back along the river. After all, the very name Thunder Bay is thrilling, is it not? 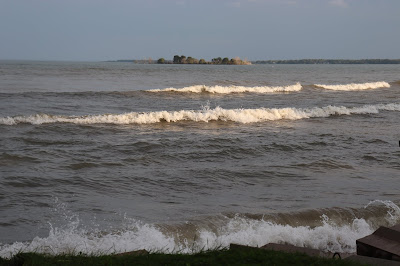 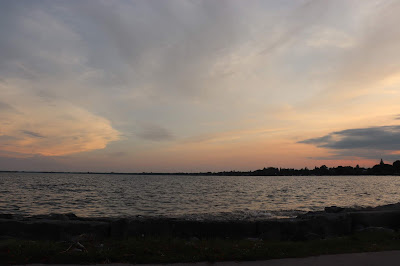 It’s obvious that a group or several groups of people in Alpena have been working hard at making a name for their town as “Sanctuary of the Great Lakes.” The obviously complementary themes of shipwrecks and diving are incorporated into every aspect of their publicity, and the art theme has been braided in, too, as you can see in the photos below. 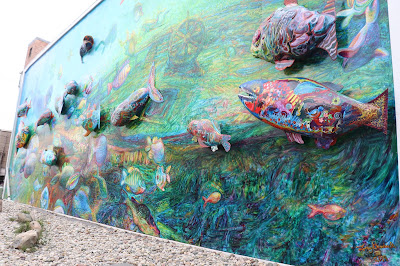 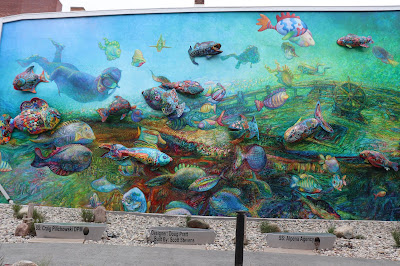 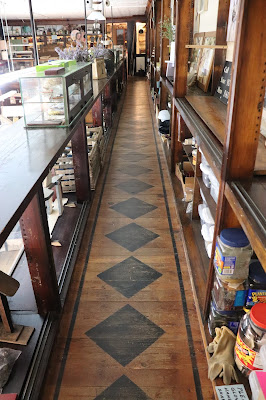 One of the most unusual and amazing places we visited in Alpena, however, had nothing to do with water or ships or diving or art. It’s a shop with the mysterious and intriguing name 'Traveling Ladders,' housed in an old pharmacy, where most of the old shelving and drawers and many of the old bottles and boxes — some of them still holding contents from a century ago — are still in place, along with unrelated antiques and some tasteful modern reproductions. The view from the (slightly scary) mezzanine took my breath away. And I loved the old painted floor. So much to see! My purchases were in the line called ‘ephemera,’ not books but charming little printed paper antiquities. 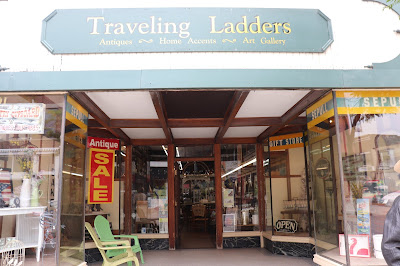 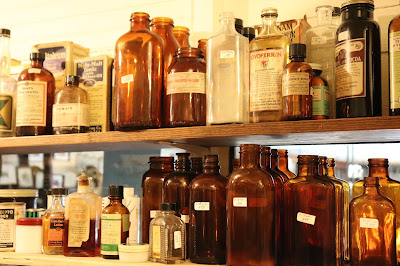 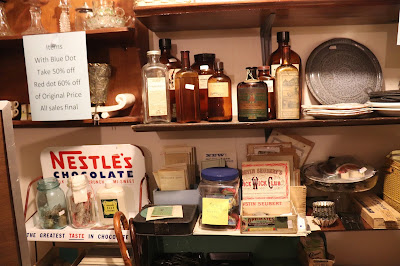 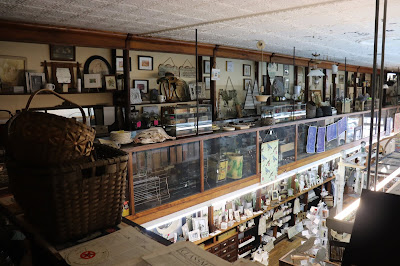 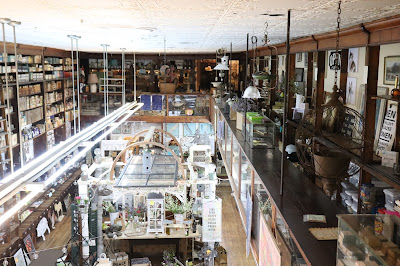 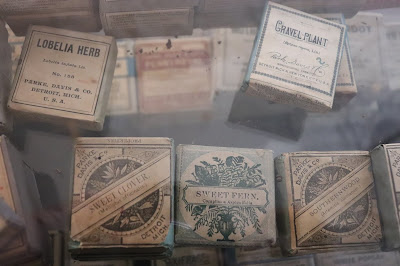 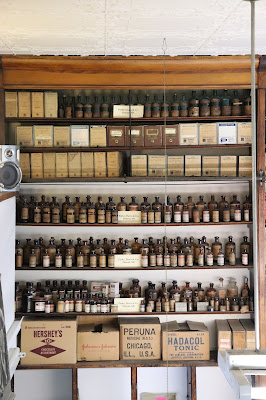 I highly recommend a leisurely stop at Traveling Ladders. I guarantee it's like no place you've ever been before. Afterward you have your choice of several good places to get coffee or lunch or dinner nearby, which will give you a chance to recollect your wits and let your head stop spinning.

We did not linger (in the rain) in Rogers City but pushed on west to Cheboygan, another town that seems to be undergoing a renaissance similar to that of Alpena. If we hadn’t decided to make for home by nightfall, we would have explored Cheboygan much more thoroughly. As it is, we saw enough to whet our appetite for another, longer stay in the area.

But I’ll save my Cheboygan photos for another day and one more travel post that will bring us right back to where I am today, here in Northport. 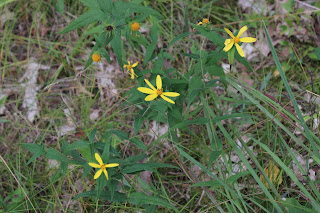