“Nor Iron Bars a Cage” 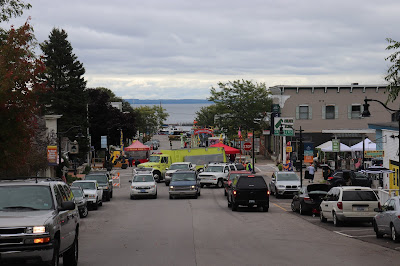 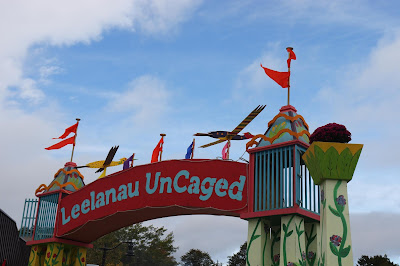 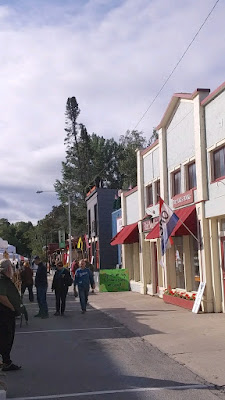 The sky was overcast at first as I walked around Northport on Saturday morning, but well before the official beginning of Leelanau UnCaged (11 a.m.) the sun broke through — Hooray! — and spirits that were already high with anticipation took flight all over town. The idea for Leelanau UnCaged came years ago from Andy Thomas, a John Cage fan, which I admit I have never been, in general — not a fan of his art, at any rate, but there is room in the world for all kinds of art, and the Cage quotes around town speak encouragement to all: 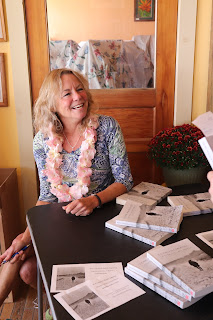 Then it began in earnest, and throughout the village there was music, dancing, and drumming, and there were artists and craftspeople and vendors of all manner of food and beverage. I was in my bookstore all day, from 10 a.m. to nearly 9 p.m., but happy to be there, where the day’s first excitement came when UPS delivered an extraordinary flower lei all the way from Hawaii for my author guest of the day. Next Nancy Peterson’s son and one of her daughters delivered Nancy’s book, which began selling even before the author’s stated signing time began and continued throughout the day.

Nancy herself was lovely and gracious and smiling and photogenic, as always, and it was a joy to see the enormous turnout for her event and the gratifying number of people buying her book.

And that, in general, is how I spent the entire day: selling books and visiting with customers and friends. Through the big front windows I could watch vendors and strolling fair-goers, and I could see the light change hour by hour. That is to say that I did not feel in the least “caged” on my little treasure island. “Nuns fret not,” after all. I am living my chosen life, and it was absolutely lovely to see and feel and share the happiness that filled our little village on Saturday. 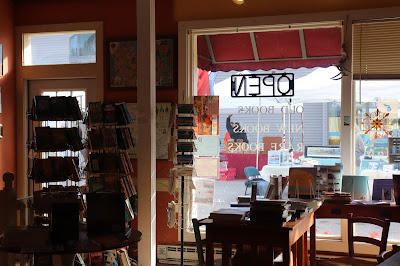 Thank you to all the organizers and volunteers and participants for yet another fabulous Leelanau Uncaged! It just gets better and better every year!

Friday was rainy. Sunday was rainy. Saturday was a beautiful window of sunshine for Northport's annual festival of the arts and of life in general, and on Monday morning I caught a glimpse of something I hadn't seen two days before. Who is responsible for this wonderful little sand castle on the lot of the old restaurant, the lot awaiting its next incarnation? The castle promises future delights, and Northport will be ready. 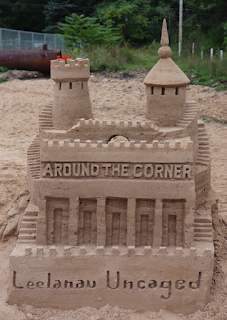 Postscript: For the Richard Lovelace poem from which today's title is taken, see here. For another work expressing similar thoughts and from which I took the phrase "Nuns fret not," see William Wordsworth's poem here.
Posted by P. J. Grath at 7:40 AM

Wonderful essay. I relived UnCaged as I read it. Thank you.