The Season Turns, and I Slow Down

It feels like fall, doesn't it? Great weather to bundle up for a long country walk and then come home and get cozy with a book! But which book? Not only are there “so many books” and never enough time, but also so many reasons to read, and we read differently depending on the material and our own purposes in turning those pages. I've been thinking about this as I look over the last few books I read during summer's closing days.

I read Immokalee’s Fields of Hope to learn more about a place we had passed through many years ago after leaving friends who lived then in Everglades City, Florida. The book was simply and straightforwardly written, and I appreciated the author’s story of how her own life had been enriched when she stepped outside her privileged comfort zone. I saw Immokalee only from the outside and was grateful for an opportunity to see it (at least one view of it) from the inside. 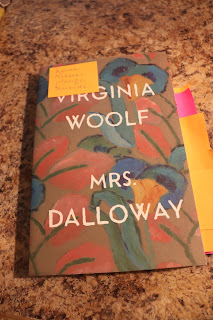 Mrs. Dalloway, Virginia Woolf’s classic, was the book our reading circle chose for September. While not exactly difficult to read, it is serious literature, and I approached it seriously, not going so far as to underline or make notes but noting various themes (hours, kiss, plunge) as they recurred through the novel and enjoying the lyrical sentences and deft, seamless changes from one consciousness to the next. Neil Gaiman’s American Gods, on the other hand, was a challenge, and I can’t say I enjoyed every page, but his beautiful, imaginative writing kept me going. In the end? I wasn’t sure where I’d been or what had happened — to me as a reader or to the protagonist in the story. So I'll say I kept at American Gods with determination and finished it with a sense of accomplishment, glad to have read it but pretty sure I won’t be re-reading it.

Anne-Marie Oomen’s Love, Sex, and 4-H, on the other hand, was a worthwhile re-read for me. It answers the question, “What were the Sixties like?” for one young woman growing up in rural northern Michigan and reminds me once more that “the Sixties” were a very different experience for everyone going through them. Oomen’s memoir is structured in a way that gives shape to her adolescent memories, and her writing, as always, gracefully accomplishes her ends. Since I had read this book once or twice already and feel now a fairly comfortable distance from my own tumultuous Sixties adolescence, I could read Love, Sex, and 4-H without angst, simply for relaxation.

Continuing to indulge in relaxing reading, I returned to a book I’d dipped into several times over the summer, Lafcadio Hearn’s Glimpses of Unfamiliar Japan. Hearn, a foreign visitor to Japan in peacetime, teacher of English in in a boys' school, lived in an old traditional house with garden in the town of Matsue. He fell completely in love with Japanese culture and describes his experiences and investigations in detail. Subsequent history took a turn Hearn did not foresee, but that was later and not part of this book. You can read more about Lafcadio Hearn's exceedingly complex life here. 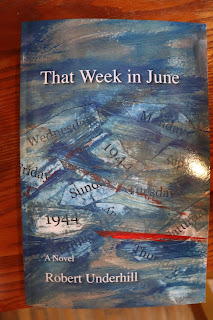 I read also local writer Robert Underhill’s new novel, That Week in June, set not in Leelanau County in the 21st century but back in 1940s Carolina. That Week in June is as much coming-of-age novel as murder mystery. Those of us who have been “of age” for a long time, however, can read stories like this differently from those still in the throes of growing up, and so for me the book was another little escape.

Finally, re-reading tempted me once again when I reached into my cookbook collection -- where other books seem mysteriously to have collected, as well -- and my hand fell upon Horses Never Lie: The Heart of Passive Leadership, by Mark Rashid. I love this book so much! The way I read it -- and never losing sight of the horses! -- I find the lessons Rashid drew from his observation of horse behavior in herds also pertinent to human behavior in crowds. See what you think -- 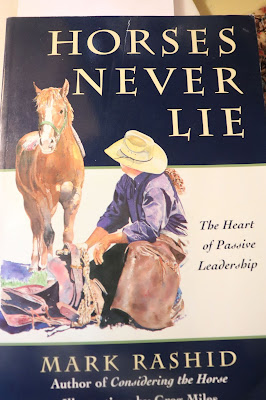 There is the flashy, stand-out personality of the “alpha” in the herd that everyone notices. Ah, but the “alpha” is not the horse that others look to for real leadership, guidance, and safety. He is the one they fear and avoid — the bully, as it were. The horse whose true leadership the other horses recognize and acknowledge has a calm, quiet personality. He is the horse that lets the others feel safe. And they are safe with what Rashid calls this “passive leader” — “passive” in that he did not seek leadership but had it conferred upon him by the herd. He is the horse with common sense. He does not panic or run scared or explode into temper tantrums but exhibits grace and courage under fire. It is the author’s belief that a rider who wants partnership with a horse rather than dominion over the horse will seek to become the calm, consistent passive leader that horses naturally look to for guidance in a herd.

Rashid tells the story of a large herd of horses that separated into two bands, each bossed by a rival alpha. The boss horses were Captain and Otis. Most people would have looked at the horses and concluded that Captain and Otis were the leaders, but Rashid saw something different.

You see, the herd members were very peaceful and they seemed to get along with one another quite well. There was never much turmoil amongst them. On the other hand, the attitude of the entire herd changed dramatically whenever Otis or Captain came around. The atmosphere went from one of calm camaraderie and mutual respect to one of strong, palpable uneasiness. I attributed the uneasiness to the fact that the boss horses were not only relatively mean to the rest of the herd, but were also unpredictable.

Up to that point I’d been under the impression that most horses within a herd looked up to the boss horses with a sort of awe or with undying respect. But as I watched the herd react to Otis and Captain, I got a whole different picture of how horses looked at their leaders. It wasn’t awe or respect at all, but rather with mistrust and, in some cases, downright fear. In fact, the majority of the herd usually did everything they could to avoid any contact with the boss horses.

A few pages later we are introduced to a horse named Buck as Buck is being introduced to a boss horse named Pete. In the beginning, Pete is determined to run Buck away from the feed bunk, and Buck seems to give ground again and again, but he never runs away, and he never goes far. Neither does he enter into confrontation with Pete. Instead, while Pete is repeatedly driven into righteous fury by Buck’s violations of what Pete considers his space, Buck remains calm and lets Pete work himself into a lather and exhaust himself until finally the two are feeding side by side, Buck’s purpose accomplished without violence of any kind. Later a new mare introduced into the herd is the victim of attacks by other horses until Buck’s quiet demeanor allows her to seek his protection, and after that the other horses all accept her, too. 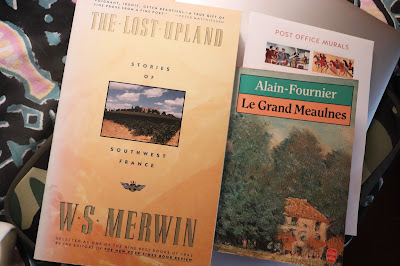 The Artist and I are going to take a few days of fall vacation this coming week, and during that time I will continue my reading for relaxation. For our modest Michigan wanderings I’ve set aside The Lost Upland: Stories of Southwest France, by W. S. Merwin, and Alain-Fournier’s Le Grand Meaulnes, the most romantic — in the largest sense of the word — novel I know, and yes, one that I have read before. Summer is over, fall is here, and the transition recommends that I continue to take it easy with my reading for a little while. Also, that I take longer walks with our darling girl.

See you when we get back. We won't be gone long. 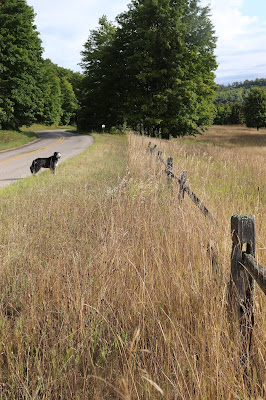