Potluck, Potpourri or a Rose By Any Other Name 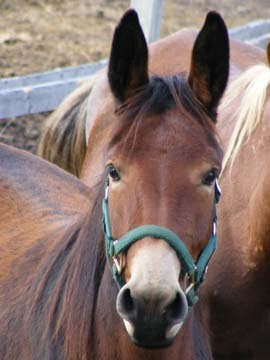 Odds and ends is what I have to post today. That beautiful mule above was the only good photograph I scored yesterday, though I had my camera with me all day long, but don’t you think this image was worth a day of carrying a camera? 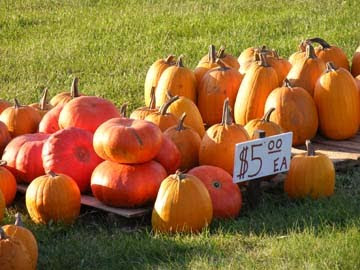 Here are some pumpkins that appeared recently on M-22 near us. We won’t have Bob’s pumpkins this year next to our driveway, but other growers in the neighborhood have stepped up to fill in the gap. These are at Nick and Julie’s. There are more at Tom and Carol’s, more at Panta’s, more on down the roads. Yesterday I heard that last year there had been a national shortage of canned pumpkin, a pumpkin pie crisis, of sorts. Because you really don’t want to try to make pie out of a jack-o’-lantern pumpkin. But Nick and Julie have pie pumpkins, too.

This is the first year I’ve grown edamame (edible soybeans), and somehow an opportunity to work them into a post did not present itself, so I wanted to include some pictures here--first, in their fuzzy little pods, then shelled, and finally in a delicious mix of vegetables. The corn was from Panta, the onions from Jess, tomatoes and edamame from our backyard. 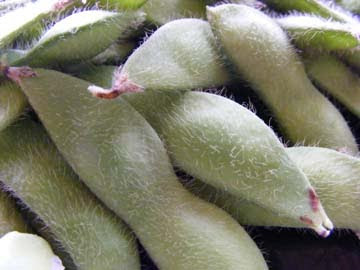 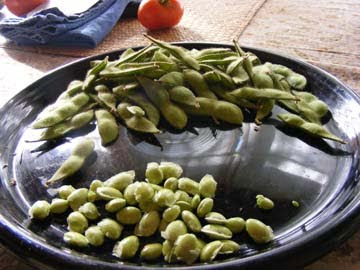 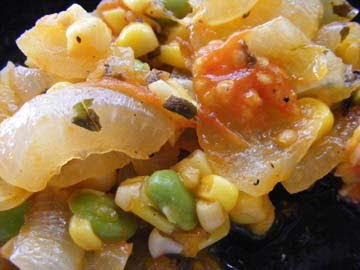 Then, how about Canada geese flying high over a field? 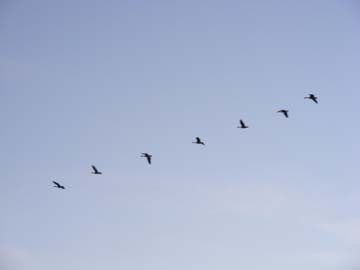 And a fish ladder in Traverse City? 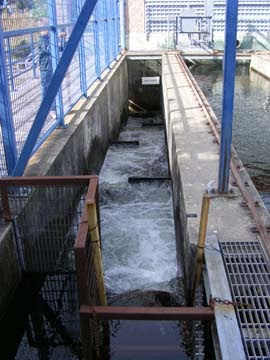 Finally, to wrap up this completely random post, here’s one last item that didn’t seem to fit anywhere else. It’s an old photo I found in a consignment shop in the U.P., the same place I bought those old postcards you saw earlier. These people fascinate me. Are they Irish? See the railroad trestle in the background (left)? The woman in the shop thought this photograph may have come from Onota, as did at least one of the postcards. (Remember George and Emma?) Is this all one family? Would any of their descendants recognize any of the people pictured here? 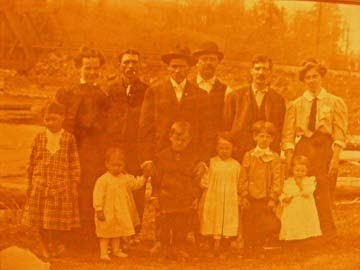 I can't help the way my mind is hopping around these days. David was interviewed yesterday by Bob Downes of the Northern Express, his show opens at Circa Estate Winery on Sunday, and the following Saturday I'll be having a big bookstore wing-ding for Dean Robb and the book about his life by his son, Matthew. (Nice article in the Leelanau Enterprise, as well as my ad.) The week after that? Fall Festival in Northport.... And then it will be time for Halloween. October is getting like summer, going by in a blur.
Posted by P. J. Grath at 11:04 AM

It was fun to see all these snippets. Your supper looked very good. Trust me to focus first on the food. But it's autumn!

Yes the mule is handsome, and the geese were a catch, and the fish ladder is something I hadn't seen before, and the fuzzy edamame were very appealing and I wonder, too, about the lives of the people in that photo.

Gerry, don't you just love to say 'edamame'? And doesn't the term 'fish ladder' conjure up a cartoon in your mind?

I'm thinking a lot about Michigan residents in earlier times as I re-read L. E. Kimball's A GOOD HIGH PLACE, which is set, by the way, right on your very own Torch Lake. Hint, hint!

I didn't know edamame were in fuzzy pods! I've thought about growing it...was it easy?

Planted the same time as my regular (well, purple-podded) beans, the edamame didn't reach harvest time until 3-4 weeks later, but they were no trouble at all, and I'll plant them again.