Vacation Day 3: And Then It Rained 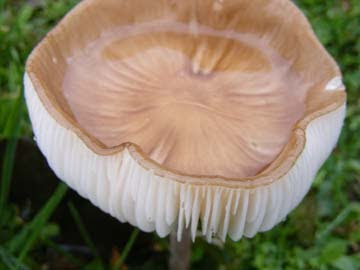 We saw this little rain-filled mushroom cup on our Saturday walk from the Superior Hotel to the West Bay Diner in Grand Marais. Back in Leelanau, it seems appropriate to post our third vacation day this morning, as the wind is splattering rain against the windows of our old farmhouse. How will vacationers in Leelanau feel about the weather today? We didn't mind wet while we were in the U.P. When your #1 vacation priority is relaxation rather than recreation, no "bad" weather (short of a natural catastrophe) is a problem or even "bad" at all. What could be more deliciously restful, after all, than falling into an early afternoon nap over a good book in a cozy hotel room while raindrops thrum against the windowpane?

Here I need to back up a couple of days, though, back to Thursday, our travel day from Northport to Grand Marais, because if this is going to be a post about books, I have to say that no one knows how to take a “busman’s holiday” like a bookseller. Eager as we were to reach the U.P., David and I stopped at a used bookstore before even reaching the Mackinac Bridge. Chris Nye’s shop, opposite the Pellston Regional Airport, has been open for about a year. 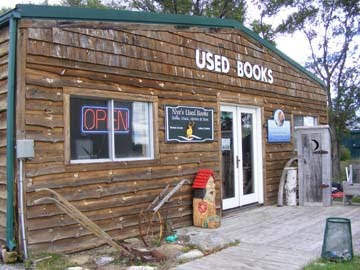 The inside of this simple pole building is quite a surprise. You’d swear you were in an old log cabin. 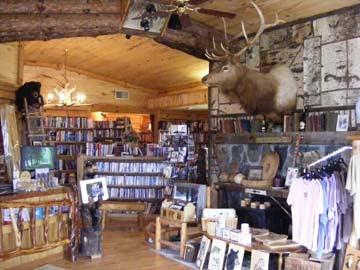 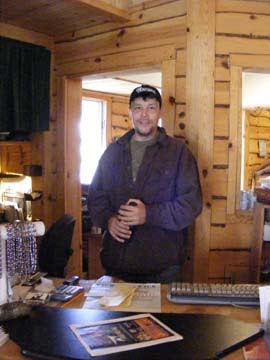 Chris is happy to be surrounded by books while he works on web design, his main business. Most of his used stock seems to be current popular fiction (brought in by local customers for trade credit), although he also carries a couple of new titles by local authors who have come to his store to do book signings, and I found an annotated Ulysses and a couple of other treasures during our visit. As I tell my own bookstore customers, it’s always potluck with used books, and you never know what you’ll find until you comb the shelves. Chris was friendly and welcoming, we were glad we’d stopped, and we’ll stop again the next time we’re going through Pellston.

North of the Bridge we headed next directly to First Edition Too, a bookstore I highly recommend. To reach my friend Mary’s shop, though, don’t take the road to Moran, despite her mailing address. Well, you can, but that’s the long way around. The easier way is to stay on U.S. 2 through Brevort and then grab Worth Road as it angles back like a hairpin. Go through the first intersection and then look for this welcoming sign. 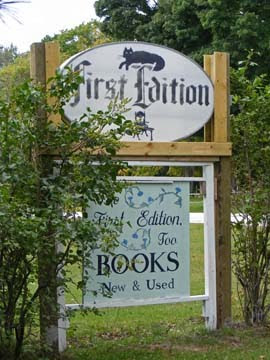 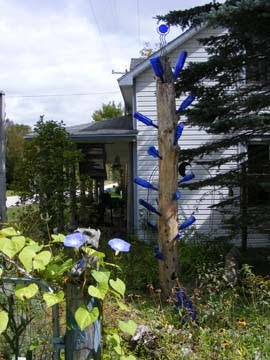 I always find wonderful books at First Edition, and it’s always wonderful to see Mary, too. We found her busy with a garden project, but she put aside her spade long enough to show me her new bottle tree and sell me some books. I envy Mary having her bookstore, home and gardens all together in one spot.

Fast-forward now, back to Grand Marais. As it happened, the three books I read while there were the three I brought with me from Northport. First I read straight through Aaron Stander’s fourth Ray Elkins mystery, Shelf Ice, and have to say it’s my favorite of the series. (Reminder: #1 was Summer People, #2 was Color Tour, and #3 was Deer Season.) How long ago was it that the shelf ice formed such magical Arctic caves out by the Grand Traverse Light? Four or five years ago? I’m no kayaker, winter or otherwise, but those who are will appreciate Stander’s depiction of their sport. The action kicks off almost immediately, cinematically; there is also, however, plenty of friendly, realistic, searching conversation between characters. Friendships feel genuine. And Stander knows the Leelanau-Benzie territory very well, too. All told, there’s something for everyone in this book, all well integrated into a carefully crafted plot.

The second novel I read (not all these books read on the rainy Saturday, you understand) was Five Quarters of an Orange, by Joanne Harris. Strange. I’d hesitated over taking it along, not sure I wanted to read it at all, as the cover blurbs seemed directed at serious foodies. I mean, there’s good food in the U.P., hearty food, but not gourmet French cooking, so did I want to torture myself with what I could be eating in Paris? Well, it wasn’t like that at all. Food was an ingredient in the novel but hardly its theme, which was serious and dark, with lots of symbolism (not overdrawn) as the narrative moved back and forth between the main character’s late adulthood (age 65) and a sequence of events in her childhood (age 9). Secrets, deception, cruelty and betrayal form a story that haunts the reader long after the final page of the book has been reached.

Third book was nonfiction, The English: A Portrait of a People, by Henry Paxman. Part history, part social commentary, pretty funny in parts, quite refreshing and full of surprises, the chapters in this book moved right along. A complex and contradictory people, the English! Oh, and there’s a lot about how one can become British (an immigrant, for example) but not English. Interesting. I think there is no parallel distinction in France or in the U.S., although there is, I can’t help thinking, the fact that one can become a “local” through long residence in a community but never a “native.”

Well, and besides doing a lot of reading and picking up more books (we brought home two boxes), I also found an opportunity to indulge my passion for old postcards. “Northern Autumn, Birch Drive” could represent many Michigan locations. The salutation reads, “My Dear George,” and the card is addressed to Munising. The second card, more mysterious, has no picture whatsoever; neither does the address side have a street post office box number. 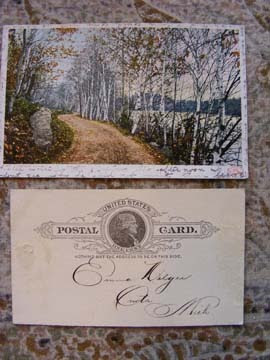 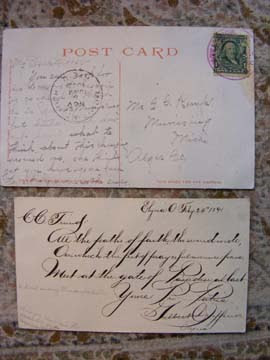 There is only the name of the addressee and the direction “Onota, Mich.” You can see the beautiful handwriting, almost calligraphy, in which a pious sentiment was written. Down in the corner, however, in light pencil, is a simpler note: “Would you allow me the pleasure of your correspondence?” There is no postmark, so I imagine this penny postcard, if sent, was mailed in an envelope. Did Emma agree to a correspondence with Gilbert? And then what happened? The date on this card is February 24, 1891.

Returning to books, I should mention several novels connected to our home away from home. Parts of the novel Sundog, by Jim Harrison (who for years maintained a writing cabin east of town), are set in the Grand Marais area; Phil Caputo rearranged geography somewhat, but the little U.P. village in Indian Country is recognizably Grand Marais; and 2011 will see the publication of South of Superior, a novel by our friend and hostess (at the West Bay Diner) Ellen Airgood.

The lighter side of literature is also well represented on Lake Superior. In fact, Grand Marais cites as important history the long-time summer residence of William Donahey, creator of the cartoon Teenie Weenie characters long beloved of newspaper comic readers. The visitor center in Grand Marais is one of the original “pickel barrel” Teenie Weenie homes, recently renovated, and this year I noted that a miniature barrel had appeared by the side of the larger one. Various characters are represented on this small barrel, which is further decorated by a border of pickles. 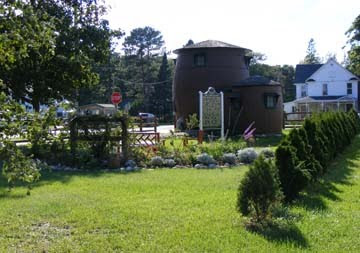 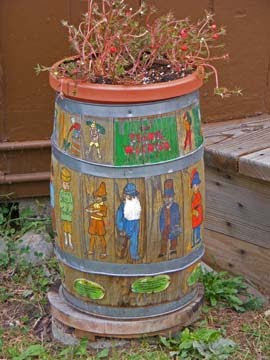 “Nature in Abundance” (the slogan of Grand Marais) lures us down many U.P. two-tracks, but there is always plenty of time for reading Up North, too—at least, for those of us lucky enough to be on vacation there. All the while we were there, I kept reflecting on the fact that for people earning their living there, life is not a vacation, just as my home ground Up North here in Leelanau County is vacationland Up North for other people. But it all works out, here in beautiful Michigan. 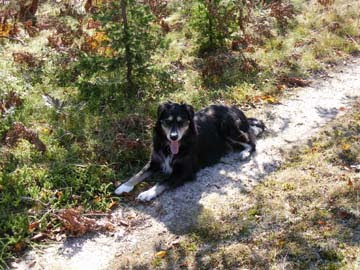 That settles it. I'm going to get Chris and Sonny to let me open a used book store in the Schoolhouse. I can even get real internet there. That way, the next time you head toward the bridge, you will detour to visit me! And, um, that way I will finally clear out some of the books that threaten to overwhelm my house. And thus begins yet another fantasy of opening a little bookshop.

That portrait of Sarah lying on the sandy path is perfectly emblematic of Upper Peninsula vacations. Before I open the bookstore I am definitely going to head to the U.P. for a little visit. It has been too long. I miss it.

That's not a bad idea, Gerry. Actually, it sounds pretty good. Here are a few ideas (feel free to use one or more) to realizing the fantasy more feasible:
(1) Marry money.
(2) Have a long professional career first and retire with a big pension before opening bookstore.
(3) Own the building so you'll be paying rent to yourself.
(4) Have willing and able family members nearby to pitch in.
Mind you, I did not do any of these things, but I can swear that any one of those differences would make the independent bookseller's life a lot easier.

Still, we got away to the U.P. for five days, and you should, too. You're not that far from the Bridge to start with!

(My fantasy: a car ferry from Northport to Charlevoix, getting me to the Bridge faster, besides luring more folks to Northport.)

Hi Pamela...I just finished Shelf Ice to and enjoyed it, but felt the ending left a few too many loose ends. In fact, I even wondered if my copy was missing some pages. Did you feel that way at all? Karen

There was a little confusion with one of the characters still being convinced that someone other than the killer had done the killing. Yes, I too expected a couple more pages, but in the end (!) I decided that my criticism was minor against the backdrop of the story as a whole. You?

Pamela...Yes, it was a great read overall. It was the last of my summer fun books. Now I've got to start digging in to the reading list for the library book group. :-)

I keep forgetting to tell you that one of our favorite excursions in our UP trip was to the Crisp Point Light. Have you been there? It was the longest 18 mile drive I've ever taken, but one of the most beautiful spots I've been to.

I don't know Crisp Point Light but will look it up in Ron Jolly's Upper Peninsula Almanac.

I love the picture of the pickle barrel Teenie Weenie house!

And don't you love that it's a historical site, too? Not a battle, nothing horrible, just a cartoonist's whimsy--that's our Grand Marais!