Turning Pages Back to Childhood 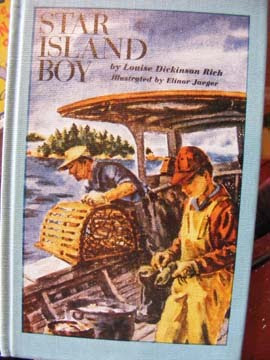 All the foster homes before the Smiths’ were jumbled up in Larry’s mind. It didn’t make any difference. They had all been the same. Each time, he had tried to be good, to be obedient and helpful. Each time, he had hoped. Sooner or later, each time, Miss Carr [the social worker] had come for him. He had asked, each time, “Why? What have I done?” He had been too young to understand that there didn’t have to be a reason why. Not if you were a State kid, there didn’t have to be. 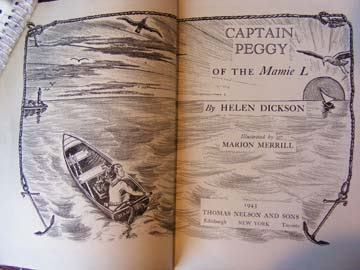 Peggy’s cheeks grew even redder; they became like fire when she heard a snigger behind her. A minute later she felt a poke in the back, and quickly turned her head. A large and not particularly clean hand, with a bony wriest protruding from a worn brown sweater, was holding a folded slip of paper towards her. Puzzled, she accepted the note, opened it, and read “Dumb Swede” printed in bold capitals.

For a few seconds the room was a blur before her eyes. Then her heart stopped beating with the intensity of her rage and the blood flowed from her face. Never in her life had she felt such a white-hot tide of anger.

Was life simpler when we were children? Most of us didn’t have the responsibilities of adults when we were growing up. Some kids did, though. We probably didn’t have to make adult decisions every day, but some days, some kids did have to, and every one of us had a tough call to make once in a while. If the entire truth about childhood were told, we’d have to admit that, along with stretches of happy, carefree time, life for young people can be awfully confusing and, at times, terribly frightening. Still, what is the point of dwelling on pain, past, present or future, our own or other people’s? We can’t choose our nightmares, but we can choose our daydreams. When adults read children’s books, is it nostalgia for a simpler time of life or for some never-experienced “golden age”?

Every now and then (as reflected in my “Books Read” lists) I dip into a book intended for younger readers. Some are recent YA novels (and I should probably investigate more of those). Some are old favorites I love to re-read, but others are “new” to me, books perhaps written during my young years or even before, but that never fell into my hands until now. The last two old juvenile novels I read, by sheer coincidence, had a lot in common.

Star Island Boy, by Louise Dickinson Rich (also author of We Took to the Woods), is set on the Atlantic coast, while the story of Captain Peggy of the Mamie L., by Helen Dickson, takes place along the seacoast of the Pacific Northwest. Larry Scott, an orphan, is brought to Star Island as a foster child. It is not his first experience with foster parents, and his bruised heart is determined not to fall in love again with a family that can never, he is sure, be his for more than a short period of time. Peggy Norquist, by contrast, lives with her mother, father and little brother on a floating home that is moved from place to place with her father’s timber job, and at the very outset of the story Peggy seems confident and capable beyond her years. Her dream is to attend high school and be eligible then to train as a nurse. Larry, younger, is almost eleven and a half, and as the story begins he is not yet allowing himself to dream.

In the course of Star Island Boy, Larry is schooled in the ways of boats, currents, lobstering and community. Captain Peggy, already well versed in the handling of boats and the ways of currents and community, learns that human beings can be complex, neither all bad nor all good, and that getting along out in the larger world beyond her family requires patience. Boats, in fact, give independence and a feeling of competence to both these young characters. Both Peggy and Larry land in tight spots and are rescued by erstwhile “enemies,” which forces them to reassess their own earlier judgments, and both are told bluntly that no thanks are necessary, that seacoast life means neighbor helping neighbor when necessary.

What is most remarkable about these two books from my perspective as an adult reader in 2010 is how much independence these children had. It was expected that they would explore the physical worlds surrounding them and that they would sometimes find themselves in dangerous, even life-threatening situations but that they would learn valuable lessons from their experiences, picking up skills acquired only by doing. Their lives were not all play, either. They had serious chores and serious jobs to do and were contributing apprentices to small communities of hard-working, interdependent adults.

Life is no longer like this for most American children. Chores, when kids have them, are carefully supervised, recreation scheduled and circumscribed. Tethered to parents by cell phones, they “explore” shopping malls. It is a paradox. Sexually hurried into adulthood by consumer culture, too many are at the same time psychologically infantilized by understandably paranoid adults.

Okay, okay, I’m down. I’ll simply remind my readers about Richard Louv’s Last Child in the Woods and let anyone who wants to click here for a refresher on that book. 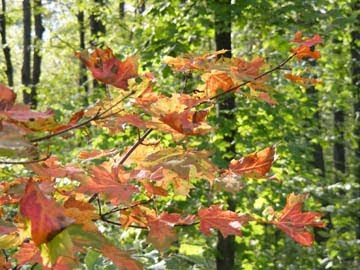 I count myself lucky to live in a rural neighborhood with semi-wild pockets, a neighborhood that gives me plenty of room to get outdoors and be a kid again. Julia Cameron, in her book The Artist’s Way: A Spiritual Path to Higher Creativity, recommends what she calls “the artist date,” a tool for creativity that demands only making time for “quality time” with yourself:

Spending time in solitude with your artist child is essential to self-nurturing. A long country walk, a solitary expedition to the beach for a sunrise or sunset, a sortie out to a strange church to hear gospel music, to an ethnic neighborhood to taste foreign sights and sounds.... 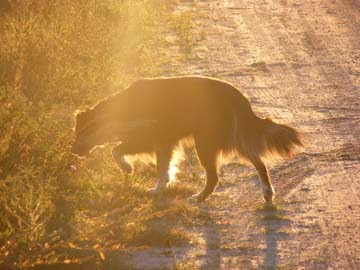 Confession: I rarely schedule time for myself, and I usually have a companion in my solitude. Yesterday evening, for example, I went out with my camera and Sarah. Yes, she's really there, with that blinding sun behind her! I walked, Sarah ran. I picked up stones, she chased sticks thrown for her. My camera kept me focused, Sarah kept me happy, and waiting for sunset kept me from going home too soon. 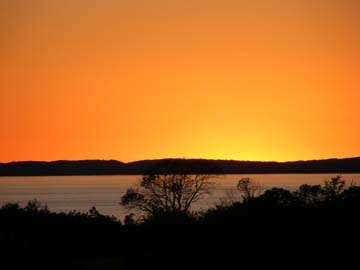 Love being a kid again when I can. Camping in the backyard with the dog, wandering the beach when I can be there, staying up all night reading when there's no job the next day....lovely!

Dawn, you've reminded me of a night I slept outdoors with my old dog, Nikki. Stretched a sleeping bag right out on the grass and looped Nikki's leash around my ankle. Mysterious swoopings and flutterings and squeaks all night long--magic!