I’ll never make my mark as a wildlife photographer. For that I’d have to spend more time both behind the wheel (rather than as a passenger) and out of the car, on foot. I’d also need a much, much better zoom feature on my camera, not to mention years of training, knowledge and experience. So, it’s not in the cards, and I have to start this post by admitting that I have not a single photograph of the pair of sandhill cranes with their adorable little rust-colored chicks, a family we saw on the side of the road near Hernando Beach a few days back, the parents so elegant, the babies so charming!

Later in the day, down at Jenkins Creek where we had gone with our folding chairs to sit in the sun and read and draw (wearing jackets, please note), I failed again, repeatedly, to catch a great blue heron in flight as it swooped down in pursuit of a fish on the end of someone’s line. Storks, on the other hand, skulking around like grumpy, hunchbacked beggars, were no trick at all to catch in the camera’s eye. 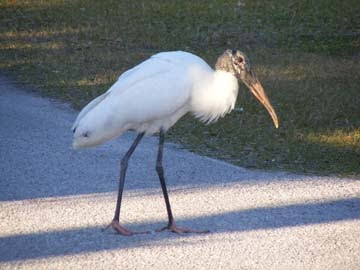 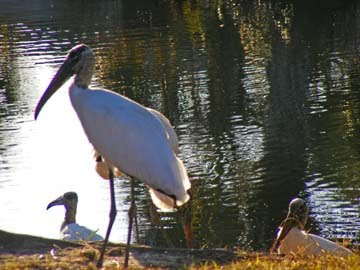 Somewhere in between total failure and resounding success were my attempts to photograph a majestic bald eagle. Well, majestic in appearance, like the great blue heron, but, like the heron, eager to let someone else do the fishing and then zero in to steal the catch. High in a bare, dead tree, late afternoon sun bathing him in golden light, the eagle was an exciting vision. But you see where a more powerful zoom would have been more than handy. 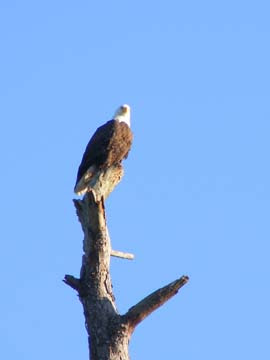 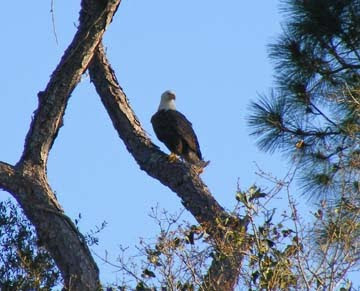 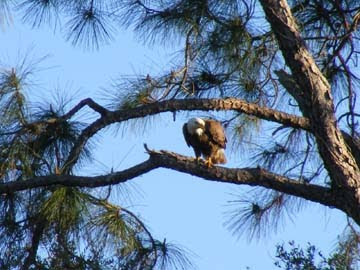 It’s been a pretty birdy winter here in Florida. There was that roseate spoonbill on Valentine’s Day, and another day I had a marvelously clear view through binoculars of an eastern bluebird—a common bird, I know, but I don’t commonly see it. “Our most common woodpecker” is exciting to me, too, whenever I get a clear, close view of one like this: 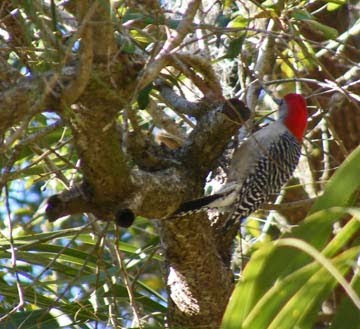 And I don’t think I have yet posted this closeup of a crested cormorant. 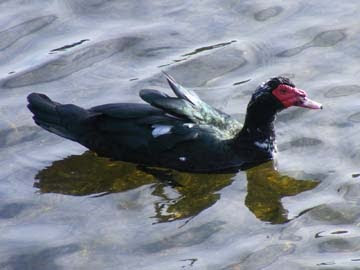 One of the best things about Florida is that after several visits to winter bird paradise David is finally getting over the worst of his bird-phobia and becoming interested in feathered and flying things. But did he want me to check out the National Geographic video of birds of America? He hasn’t come that far along yet.
Posted by P. J. Grath at 8:05 AM

The birds are beginning to return to northern Michigan. There was a lot of twittering in the treetops when we went for our walk this morning. It has to be the light, it can't be the temperature.

LOVE your bird photos! I didn't know bald eagles stole other bird's catch, that was interesting! I love to see bluebirds too, we had some in a house one year, but most years I only catch an occasional glimpse. I'm waiting to hear the red-winged blackbirds...they represent spring to me. Have already seen the flocks of returning robins. Maybe it's time for you to come home!

Pamela, I think you did a good job capturing those birds. And the bald eagle photo is great! It is so hard to get good photographs of them.

Wanted to answer your question about putting links in blogs--yes, that seems to be a good idea. I like doing that, too. That could have been another tip. (Thought of about three other tips later.)

How long will you be in florida?

Tried to get the eagle in flight, but the focus wasn't good enough to post. I'm getting lots of reports of spring temperatures (even daffodils!) in northern Michigan, but our plan is to be here into the first part of April. We'll see. It's flexible.