A Tale of Two Tourist Cities 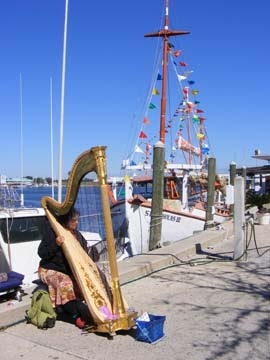 Four years ago, when we were staying in Weeki Wachee, it was not unusual for us to drive down to Tarpon Springs two or even three times a week, pulled as if by magnetic force to the sponge docks, downtown, to the city’s many attractive parks and neighborhoods. Already fortunate to be in Florida for the coldest part of the Michigan winter, we two dreamers still lived several fantasy lives in parallel with our actual existence, and one of our favorites was an old apartment across the Anclote River from the sponge docks, where we could sit by the window and watch the boats and birds and the street life on the opposite shore.

We are more settled and more focused this year, no longer in deep exploratory mode and running off to the north and east and south to Homosassa Springs, Yankeetown, Inverness, Brooksville and Tarpon Springs at the drop of a hat. The cold weather, too, has made it easier for us to stick to our books and canvasses, rather than forsaking them for the open road. And then there is frugality, always a feature of our lives but more so than ever this winter. So January and most of February somehow slipped away, and we had not been to Tarpon Springs once. 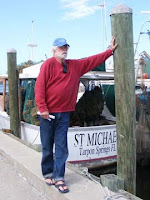 But such a state of affairs could not continue forever. Our friend Michael’s visit was a perfect excuse to visit the sponge docks for lunch on a sunny, if not terribly warm, winter afternoon, following up with Greek coffee on a back street sidewalk. And then, once reacquainted with the irresistible Mediterranean atmosphere, David and I were drawn back again a few days later. The nip in the air was even sharper the second time. I wished for a heavier coat. But our self-indulgence in making the impulsive trip was more than repaid by the unexpected presence of a harpist making heavenly music on the docks.

We sat on a bench to listen and enjoy, and when the musician stopped briefly, David initiated a conversation, as is his wont. A delightful woman! Studied in Paris, has played all over the world, is living in Tarpon Springs this winter while she and a friend build a boat to sail to Europe. We were charmed! She for her part was intrigued by what we told her about Aripeka. Then she asked where we were from, and we said Michigan.

“I was in Michigan once,” she said thoughtfully. “It’s the only place I was ever asked to leave.”

We were chagrined and asked her what town had been so stupidly inhospitable.

“I don’t remember the name, but it was called the Cherry Capital of the World.”

Now we were really chagrined! Because she had been playing on a downtown sidewalk in Traverse City, at a time when there was no festival going on, she was invited by a plainclothes policeman to “cease and desist” unless she obtained a permit that carried a pricetag of fifty dollars a day. Outrageous! This woman had been asked to pay for the privilege of providing beautiful free music for passers-by in a tourist town, adding to the town’s casual cultural ambience?

“I’ve played all over the world,” she told us with a calm smile, holding no bitterness for having been so badly treated on our home grounds, “and I’ve never been asked to stop playing anywhere else.” She had not protested, she said, but simply left town. “I figured it was a fight for local musicians, and I had other places to go.” 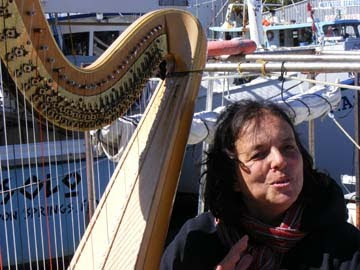 Luckily for us, one of those other places this year is Tarpon Springs, just down the pike from where we’re staying, so we will be able to enjoy again the live music of Meta Epstein, in a town that recognizes the value of beautiful music to entertain locals and tourists alike, and until our next visit to the sponge docks we have her CD, “Celtic,” featuring traditional Irish melodies.

But Traverse City, please tell me, what were you thinking? Please tell me it wasn't a plainclothes cop but a scammer with no official city ties! I did assure Meta that if she were ever to come to Northport, I will take personal responsibility for seeing that she receives the welcome she deserves.

[Note to my friend Laurie: Meta is currently preparing an all-Bach album, which I know you will love when it becomes available!]
Posted by P. J. Grath at 8:22 AM

This post made me want to visit Tarpon Springs. Sponge docks for heaven's sake! But I don't believe I'll be lingering to listen to Ms. Epstein.

Let me play devil's advocate for a moment. While I am charmed by street musicians, I would be less charmed if I tripped over them on every corner, or if cheery fiddling and bluesy guitar and flowing harp competed to produce . . . noise. And who's to say that the bluesy guitar I love would be universally admired? (I loathed the loud music a downtown shop used to blare from a speaker as an "enticement" for strollers to come in.)

It's always difficult to balance competing interests - and Ms. Epstein does have a pecuniary interest in this "free" concert, as she encourages donations and sells her CDs on the street. This is the way she makes her living, and more power to her, but she also depends on "free" performance space and ready access to prospective customers, some of whom might prefer to be "free" of any kind of music-making whatsoever.

How would you feel if an author set up an easy chair and a stack of books on the street in Northport and invited passersby to have a little read, and then to buy a book?

I rather think there might be more to Ms. Epstein's story than she told you - or less. And if she "holds no bitterness" why on earth did she dredge up this unpleasant anecdote about your home state? That was at the very least rude and at the worst spiteful.

(Can we tell that I am a crankypants today? I will be cheerier tomorrow.)

I remember a harp player in Mackinaw City a couple of years ago. Beautiful music. Perhaps the city ordinance needs review, obviously there are several sides to the issue.

Wow, Gerry, you must really have been having a bad day! I’m sorry and hope you’re feeling better by now. I was a bit cranky myself yesterday morning—no, not cranky but feeling bleak about the world. These moods can be like weather—I’m speaking for myself, at least. Anyway, you did make some points I want to answer, not in any particular order.

First, what makes you think people who don’t pay rent to keep a bookstore in Northport are NOT selling there? It happens. It’s even happened IN my store, and there I do draw the line!

A street musician who set up outside a concert hall might be competing with musicians playing a concert inside, but how are retail businesses and restaurants in a commercial district harmed? I stand by my belief that the sidewalk music adds to the appeal of the place. Paris would not be Paris without its buskers. They add to the cultural ambience and tell visitors that this is a city where freedom and the arts are thriving. But hey—I would also love to see horses in the streets of Northport every day of the summer, and I know there are people who wouldn’t like that, either. Messy. Smelly. Well, too neat and orderly all the time can be downright boring, in my opinion. There are shopping malls to provide that kind of sanitized pseudo-experience. Is it truth or folk myth that the first law the Nazis passed in Berlin was banning dogs from the street?

Noise ordinances are sufficient to deal with bands too loud for comfort.

I cannot even begin to take seriously complaints about live music when CANNED music is piped out into streets already raucous with TRAFFIC NOISE! Let’s not get into people yelling at their cell phones or unruly children....

Remember William Least Heat Moon’s single experience in Michigan, a negative encounter in Mount Pleasant? Similarly, being kicked out of Traverse City was Meta Epstein’s one Michigan experience. She recounted that experience as a funny story, and I hope if it had happened to me that I would have told the tale with as much humor as she did.

I sound pretty cranky myself, Gerry, but I only mean to be emphatic. Intelligent, well-meaning people can disagree, and obviously you and I do on the question of street musicians. I’m just not backing down on this one.

And yes, she's out to make a living, but can anyone honestly think this is easy money? She's working as hard on behalf of culture as any writer or bookstore owner, and I applaud again her beautiful music.

You and can never be at war, PJ!