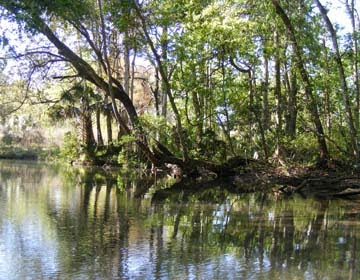 One of my fond Florida wishes came true over the weekend. Friends invited us to come out with them on their small boat for an excursion up the Weeki Wachee River, not only as far as the Upper Deck (restaurant and bar), which as far as we’d gone on a previous trip, but up past the houses, into the wilds of the Weeki. (Sarah got to come, too—her first boat trip!) We began in Hernando Beach, went out in the Gulf of Mexico to Bayport, and at Bayport nosed on up the river, first over water we had traveled a few weeks earlier and then into new territory. It was glorious! 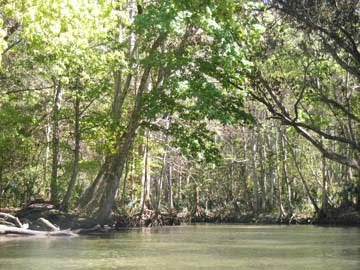 We weren’t the only ones with thoughts of a river trip that day. There were canoeists and kayakers and swimmers and at “Hospital Hole” (so-called because it’s so deep it frequently sends inexperienced novices to the E.R. with “the bends”) there were divers in scuba gear. It was Saturday, after all, and the weather had finally turned warm, so everyone wanted to be out. But the farther upstream we went, the more we had the beautiful, wild river to ourselves. 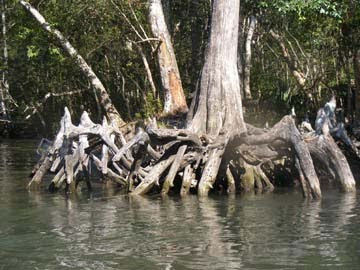 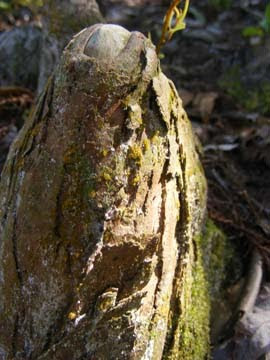 There are cypress trees of all sizes along the upper Weeki Wachee, their mossy, knobby “knees” and thick, tangled roots continually beguiling even to our long-time Floridian friends. Rain lilies bloomed on the soggy banks upstream, and where we stopped for our picnic I found freshly unfurled Jack-in-the-pulpit. 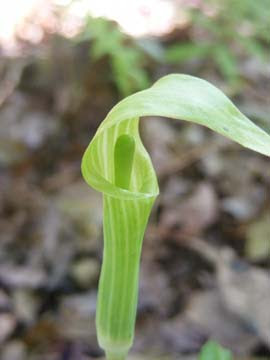 We saw turtles, one of which obligingly continued to pose for me rather than plopping into the water at our approach. 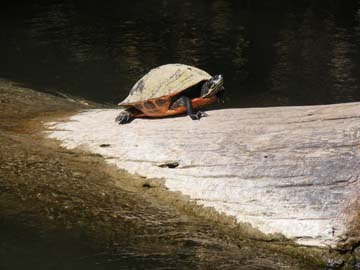 We also saw manatees, one of the most difficult of animals to photograph, because they are underwater except for brief rolls to the surface (when you least expect it) and because their form is as close to shapeless as it’s possible for a mammal to be. I submit the following as evidence: 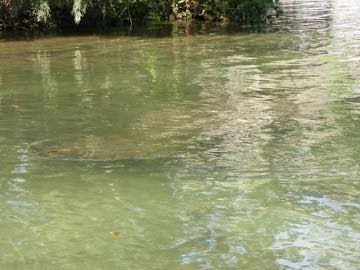 The farther upstream we went, the narrower became the spring-fed, sand-bottomed river and the heavier the overhanging foliage. The springs are the source of the river, which means its temperature is a steady 72 degrees year-round, but Gulf waters penetrate the river deeply, so that its level fluctuates with the tides. Thus regretfully, we turned somewhere short of the springs and let the tide help the engine carry us back to the Gulf of Mexico. We were all pretty tired by then, anyway. But what a fabulous adventure!

How did Sarah do? Pretty well, after her initial Dog-Overboard. She did, I admit, jump ship in the Gulf on the way out, probably nervous about being in a boat, but after the panic of finding her feet didn’t touch bottom she was glad to be rescued and ready to settle down and enjoy the trip. Here are the stages by which one freshwater dog accommodated to saltwater boating. First, happy exhilaration (wind and sun and friends), 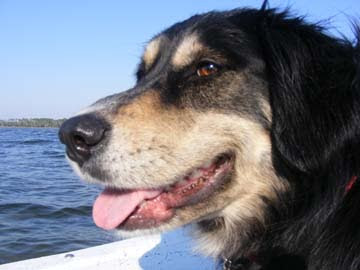 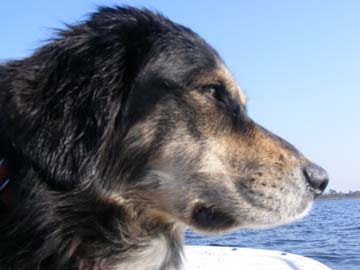 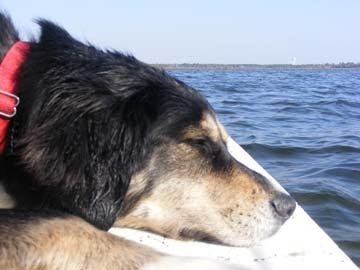 Come to think of it, that about sums up the day for the human boaters, too. Having so much fun on a daily basis would be unthinkable! Working is a piece of cake compared to boating. Unless you're a shrimper and have to do both at once, and what's that like, I wonder? 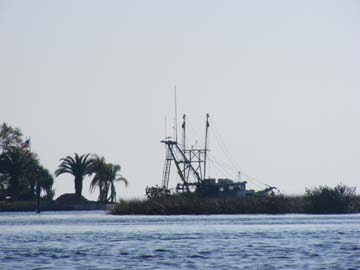 Joe and I have wondered how Bosco would do in a boat. It was nice to hear about Sarah's adventure. This is the type of Florida Joe and I would like to see also so it was nice to be on the trip with you through wonderful photos as well as your story.

That may be the prettiest jack-in-the-pulpit photo I've ever seen--and the river trip was mesmerizing. It's time for me to go over to the Jordan Valley. With dogs, of course.

Your day sounds idyllic. How wonderful to be able to float on a sunny warm day into such beautiful territory with all the unusual plants and animals to see and photograph.. and a manatee too! Incredible. Wish I could have been there as well - I would have been as well behaved as Sarah.

I would have loved to have seen a manatee (even just through the water) and those knobby knees. What an adventure!

One of my grandson's favorite books is a National Geographic book for young explorers called 'Let's Explore a River.' It's about a trip down the Ichetucknee river in Florida which seems to offer similar vistas.

How cool was that! Amazing trip, so glad you shared it with us. Loved all of it.

We've read about wilder rivers, with few if any people and many alligators, but it was good to explore the Weeki with old hands who knew bends in the river from dead ends.

What a great opportunity to travel up the river on a boat. I can even picture what the river looks like from a visit to Weeki Wachee back in the '90s. The cypress trees are beguiling, aren't they? It would be interesting to see if ANYONE ever gets a good photo of a manatee. It's hard enough to capture a dolphin as it jumps...let alone an underwater creature who rarely surfaces.

I've seen other amateur photos of manatees, and they all leave a lot to the imagination. Being underwater with them with an underwater camera would be the best approach.