A Little Bit of History Fell Out 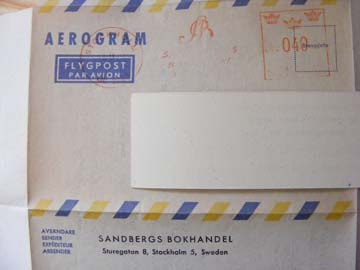 David loves Henry Miller. He loves Miller’s writings about his life in Paris, and he loves his irreverence on every subject. Miller loved life and managed to live it to overflowing, while remaining completely his own man, never kowtowing to money or other authorities. The other day I picked up for David a little paperback copy of one of Henry Miller’s novels, and out fell this carefully preserved aerogram.

The aerogram was inside a copy of Plexus (or was it Nexus? I get the titles mixed up and don't have the book beside me here in the library) and came originally from a Swedish publisher, Miller's books stilled banned at that time in the U.S. 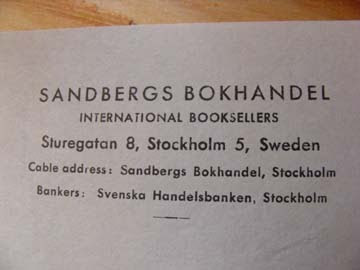 A U.S. Supreme Court ruling in 1964 overturned earlier obscenity rulings, and Miller's entire "Rosy Crucifixion" trilogy was published in the United States in 1965.

The text of the publisher's letter to the American book customer regretfully notes that Miller's earlier novel, Black Spring, written in Paris, was no longer available. 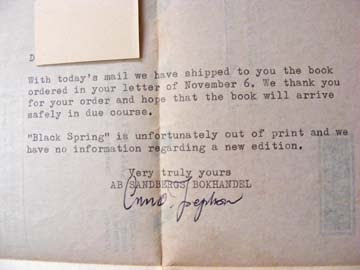 That was then. Now Henry Miller is everywhere, shelved with literature, held up as an icon. Could he ever have imagined it himself? Would he have cared? Take a look at some of the links. The guy could certainly wear a hat with distinction.
Posted by P. J. Grath at 9:31 AM

Don't you just love this stuff? Careful - it can become addictive!

Indeed. Love these little scraps of the past. In almost 17 years now as a bookseller, though, I have yet to find a single dollar bill in a book! When I think of all the 20-dollar bills I used to squirrel away between book pages, it doesn't seem quite fair.