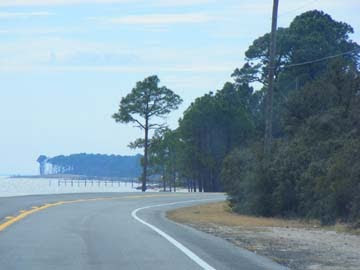 It was a weekend trip in length, though Monday to Wednesday, and wonderful it is how much excitement can be packed into three fleeting days. Some of it I’ve already covered, some will get squeezed in here, but I do have other fish to fry today. Literary fish. The pictures, such as Sarah and Cricket below and shots of Apalachicola (where we had lunch on Wednesday) further down, are little tastes of our trip up along the Nature Coast, through the Big Bend and in the Panhandle. 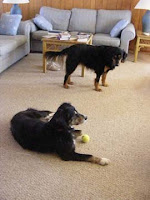 We arrived at George and Trudy’s rental house on St. George Island in time for a celebration. Trudy had just been notified, that morning, that she had won first prize in an online short story contest. We congratulated her winning entry before hurrying to read it (suggest you do the same), and she gave us some of the background that led her to this dark but poetically rendered piece of short fiction. As in Suwannee, with Gene and Judy, it was good to talk with friends about creative work. I admit that George and I drove the others almost of their minds the next morning with our relentless pursuit of up-to-date biological nomenclature, but I’ll leave that for another post. Out sidewalk luncheon was enhanced by the presence of our dogs. A perfect day! 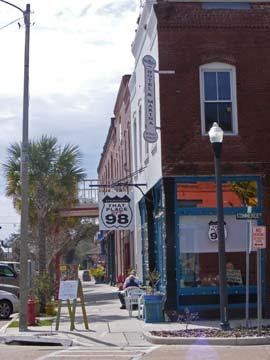 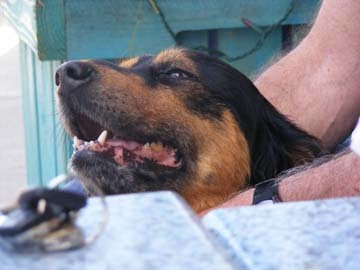 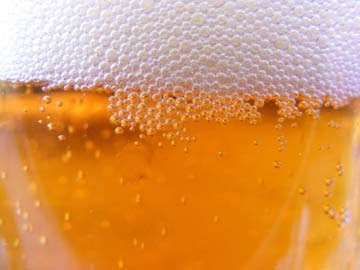 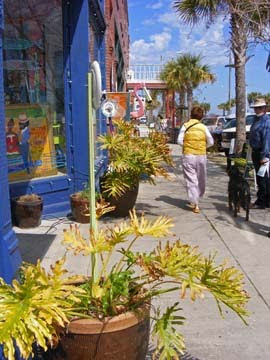 Back in Aripeka, sheltered indoors from torrential rains pounding the Nature Coast on Thursday and Friday, burying the roads here (we’re only three feet above sea level) in temporary lakes, I set aside both the novel and the biography I started reading on the road to catch up on several weeks of the New York Review of Books. This publication is not one I usually read from front to back. The first review of fiction to capture my interest was of a novel titled The Art Student’s War, by Brad Leithauser, a novel the reviewer, Cathleen Schine, contrasts to previous work by the same author. Set in 1946 Detroit, The Art Student’s War is the story of a young girl who finds her “war work” in drawing portraits of wounded soldiers, and Schine identifies in the writing an old-fashioned idealism that mirrors the city’s image of itself. So many people I know grew up in that old Detroit and are still nostalgic for it that this book is one I’ll need to order for the bookstore this spring.

Anything by Jason Epstein is guaranteed to be worth reading, and next I stop on a page with the intriguing title “Publishing: The Revolutionary Future.” That’s good, because this winter I’ve been neglecting a lot of the day-to-day decisions and changes in the book world at large, figuring that I’ll catch up later on whatever lasts and won’t have wasted my time on ephemeral trends. It is all so unstable right now. Or, as Epstein puts it,

The resistance today by publishers to the onrushing digital future does not arise from fear of disruptive literacy, but from the understandable fear of their own obsolescence and the complexity of the digital transformation that awaits them, one in which much of their traditional infrastructure and perhaps they too will be redundant. - from “Publishing: The Revolutionary Future,” by Jason Epstein (NYRB, March 11, 2010, LVII, 4)

Indeed. Who wants to be rendered redundant? But wait, I’m thinking, redundant isn’t the same thing as obsolete, which is what we really all hope to avoid becoming. Hmmm.

Epstein locates the double-edged sword in the promise of a digital future:

That the contents of the world’s libraries will eventually be accessed anywhere at the click of a mouse is not an unmixed blessing. Another click might obliterate these same contents and bring civilization to an end: an overwhelming argument, if one is needed, for physical books in the digital age.

True, Epstein is focused on publishing, not bookselling, but the concerns of dear self (in my case) always flit from the first, whenever mentioned, to the second. Digital texts and physical books are an example of the best kind of redundancy, like life preservers on a well-built boat. 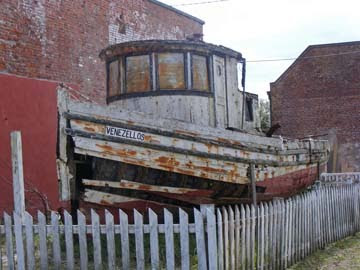 In this same issue of NYRB is a three-part essay by Tony Judt, who never lets me down. The first section, about his solitary travels by rail as a young boy with no destination in mind, says something that will resonate with the most fortunate among us: “I love trains, and they have always loved me back.”

Who wants to travel faster than the speed of light?

Being always felt stressful—wherever I was there was something to do, someone to please, a duty to be completed, a role inadequately fulfilled: something amiss. Becoming, on the other hand, was relief. I was never so happy as when I was going somewhere on my own, and the longer it took to get there, the better. Walking was pleasurable, cycling enjoyable, bus journeys fun. But the train was very heaven.
- from “Historian’s Progress: In Love with Trains,” by Tony Judy (NYRB, March 11, 2010, LVII, 4), with my emphasis added to the third sentence

I always find it annoying when someone proposes to me a route different from the one I have planned because with the alternate proposed route I can “get there faster.” Speed and efficiency are essential on the way to a hospital emergency room and not to be rejected on the way to any kind of scheduled event, but what have they to do with travel? (Or with reading, for that matter?) Life will be over all too soon. What is the sense of hurrying through it?
Posted by P. J. Grath at 10:59 AM

Love the beer photo, though I don't like beer much, and love love the last photo of the boat in drydock. The Artist's War (not sure I got that title right) is the book my bookclub is reading now, but it never came in for me from my library...and I'll be up in TC when the book club meets, so I haven't read it. Perhaps I should.

Oh, darn! You haven't read the book and will miss the discussion, so you won't be able to give me your opinion on it.

The beer was Yuenling, which looks like the name of a Chinese beer, but it came from Pennsylvania. A light lager. Nice.

It was so much fun to take a virtual stroll, to admire Sarah and Cricket and Apalachicola, and to imagine that I might spend some hours this summer reading a book . . . but I know I won't. There's no time in summer for anything but work! My winter reading has been almost entirely about local history, and some of it, let me tell you, was pretty slow going. Maybe it's time to choose a book that will delight!

Gerry, we bloggers must limit screen time to leave time for books-on-paper time! Don't cheat yourself! I bet the local history was interesting, though. Civil War? More?