Books on the Road: Second Bookstore Visit and More Besides 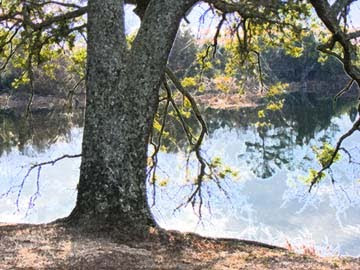 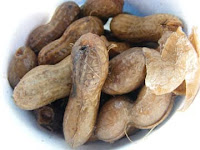 Morning arrived still cold (hard frost) but bright and sunny, and we were giddy with anticipation, because Highway 19 would be our route for the whole day, and all sense of hurry had vanished. Rolling through Georgia on good road on a beautiful day--gracious pecan groves to admire, my first boiled peanuts since leaving the South last spring, visit to A Novel Experience (bookstore) in Zebulon, Georgia, light lunch at an old movie house cafe in Thomaston, visit to a nut house (!), and many, many sightings of the beautiful and very typical Georgia houses I wrote about and photographed last year. 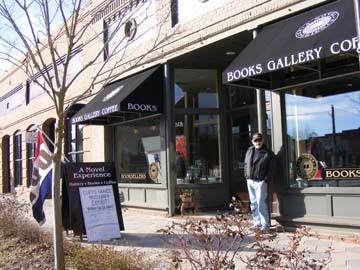 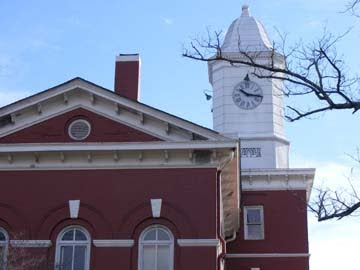 Zebulon, county seat of Pike County, Georgia, was our first, long-anticipated destination of the day, and I practically cheered to see the bookstore, A Novel Experience, open for business as we pulled up in front at 10:15 a.m. by the courthouse clock. Chris and Susan, two of the three owners and the ones we’d met last year, were both on deck, but with Chris on her way out I had bookseller shop talk with Susan. She also encouraged me to read the novel Trinity, by Leon Uris, this winter, a book I’ve postponed reading for years. Okay, Susan, now I’m committed! 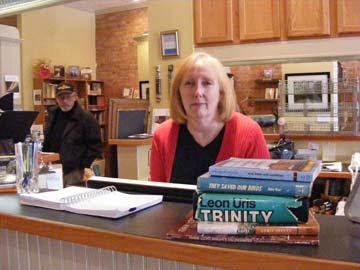 There was an exhibit of beautiful photographs called “Behind the Big House” on display at the bookstore. The photographer, Curtis Graves, has chronicled life on Evergreen Plantation, about 40 miles north of New Orleans, a place where his ancestors lived and died, both as slaves and as free men and women, for over 200 years. I wonder if a book of his work will result eventulally. As a bookseller, I can’t help hoping so. The work is certainly deserving.

Another flourishing bookstore is good news for our side! 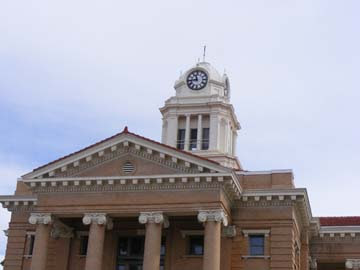 On south to the next county seat. David and I had lunch last year at English’s Cafe in Thomaston and had a wonderful time, but today we tried a new place, the Ritz Cafe, on the very same courthouse square. It’s right next door to the old Ritz movie house, open for business and currently showing “The Bright Side.” 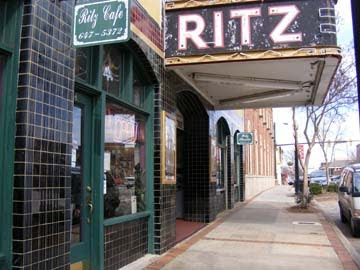 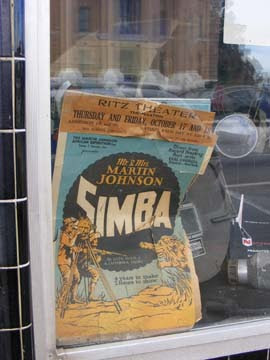 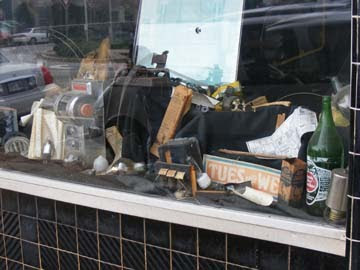 Display windows to the north of the theatre entrance feature old film memorabilia, and the cafe (to the south) also has an old movie theme, with posters and old reels on the wall and strips of film wound around pillars. The soups were delicious, the coffee perfection. 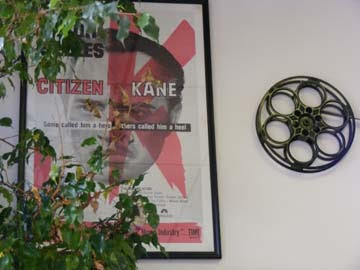 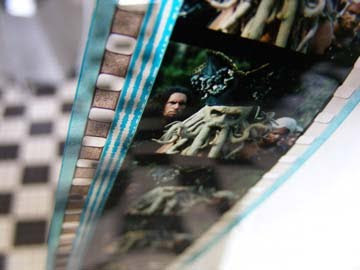 Books to soup to nuts kind of sums up our Georgia day’s highlights. On to the nuts--.

Coming from apple and cherry country, I’m accustomed to trees planted in rows and find beauty in the regularity of orchards but see in pecan groves, with much taller trees and more widely spaced rows, a different dimension altogether, almost that of large urban parkland. These groves look so gracious, so welcoming, similar to the gracious, welcoming charm of old Georgia houses. 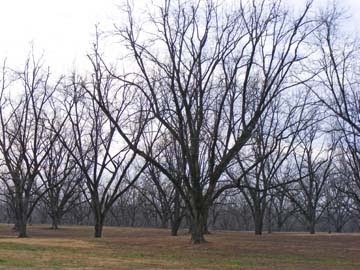 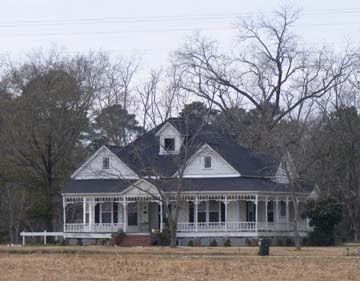 Should I confess, though, that I wanted to stop at Ole Henry’s Nut House outside Camilla, Georgia, primarily to seek out mayhaw jelly? 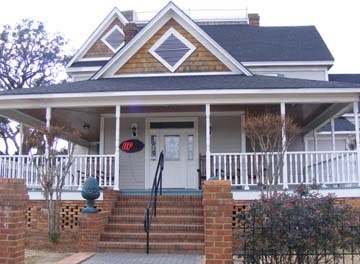 But I did buy pecans and also local honey and something like peanut brittle but made with pecans and called crickle instead of brittle. And look at this case displaying varieties of pecans--whoever imagined there were so many ? 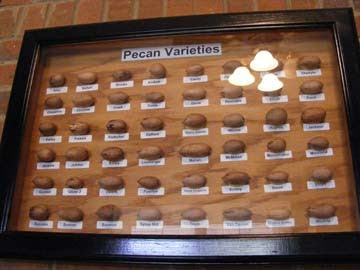 Or that a place called the “Nut House” would also house City Hall? 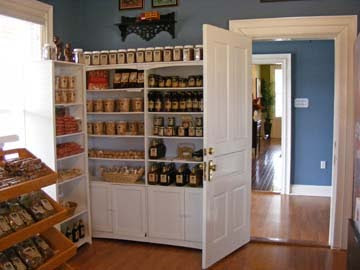 Florida has been our ultimate destination all along, but it’s always bittersweet to me to cross the state line, leaving Georgia behind. 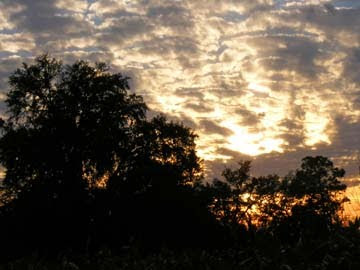 This is such a wonderful post! I long to make a road trip. It is lovely to see another part of the country that is full of so many surprises--like the vast number of varieties of pecans, who knew? Eating local delicacies, observing the differences in houses, stopping at bookstores . . . oh my.

Just read a review this morning about a travel memoir (I guess you'd call it) of a trip that couldn't be more different from ours: "Between Terror and Tourism: An Overland Journey Across North Africa," by Michael Mewshaw. I'll be ordering it for the bookstore in the spring.

Do you like boiled peanuts, Gerry? I have vowed to eat more of them this winter. Delicious and a good source of protein!

I just got the biggest wave of homesickness! We have a house in Alabama and I love driving by the pecan groves, especially in the spring or fall when the grass is green and the sun makes shadows across the big expanse. It DOES look like a park! And I love the southern homes as well, have a collection of photos myself. Thanks for taking me home!

Have a fun and safe rest of your trip to Florida!

We'll be a few weeks behind you guys! I always love stopping to buy pecans, but this time I want to take a pecan orchard tour. There must be some, right, like winery tours? We will also try to stop at the bookstore in Zebulon. Thanks for the great photos!

I have to get around to reading Trinity too. There is such a long history of the Irish in Nova Scotia.

Have never had boiled peanuts. The pecan brittle sounds tasty. I've driven through Gerogia a few times in my life and was always amazed at all the pecan/peanut signs along the side of the road.

What a place to find a pic of the face of Davey Jones.

This brings back a few memories of our Georgia trips. How fun that you're able to luxuriously and slowly work your way south. I read Trinity years ago, but probably should dive in again. Am eating some Georgia pecans (one pecan topped with a date) and thinking about pecan trees. Don't remember seeing any down there. Not that they weren't there: I just didn't know what to look for. Will now look more astutely next time we visit the in-laws. Thank you for this beautiful travelogue!

How good to hear from you all and to hear that my pecan musings touched so many of you. Somehow the fresh nuts I bought at the Nut House taste a hundred times better than anything I've ever bought Up North in a cellophane package.

Have not started TRINITY yet but have been on a definite reading binge. Writing, also.