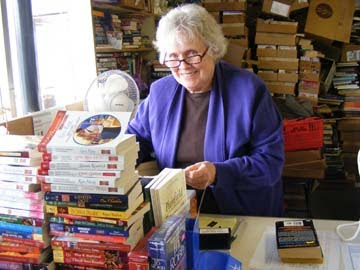 We spent our first two nights away from home visiting my mother in the far Chicago suburbs (Will County) on the Illinois prairie. This is flat land, but other differences from our Up North home are far greater. At night, for instance, the sky is not a black curtain pricked with stars but sepia in tone from the ambient light of civilization, and train whistles (or sirens, but I prefer the train whistles, having grown up in a railroad family) instead of coyote yips and howls break the silence.

By day the changes since I left here (long, long ago) are disorienting, and impatiently I wave away whole square-mile tracts of houses and shopping centers, telling David over and over, “All this was just cornfields.” The implication: What’s here now doesn’t count because it’s not in my memory. My old grade school has been demolished, and my mother tells me the buyer of the property plans to put eighteen new houses on the block. Well, I counted nine houses on each long side of neighboring blocks, including the block across the street from the now-vanished school, a space I remember as an asparagus field. Where am I?

I search out and seize upon familiar sights: that building was the old A&P, there the old Plainfield Pharmacy. Mitchell’s grocery store is still going strong on Raynor Avenue. I spot the building that once housed my first grade friend’s veterinarian father’s animal hospital and sigh with relief. Sighting a bookstore sign on Plainfield Road (U.S. 30) between Plainfield and Joliet, however, triggered more than relief. Oh, joy! New and used books! I was even happier to learn that this is not a new store but simply a new location for a store we had visited some years back out on Jefferson Street (U.S. 52) in Joliet. In fact, this shop is over 30 years old and, judging by the steady business at the cash register, doing well. There was a sure cure for the heebie-jeebies of change! Naturally, we stopped! 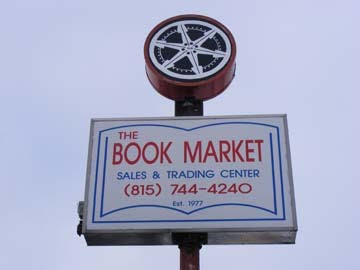 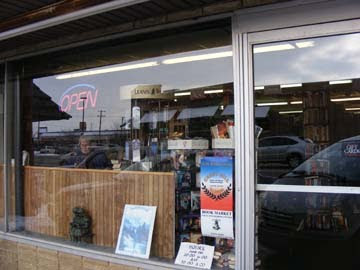 Book Market’s basic inventory is predominantly paperbacks, as it was in the old place. With over twice as much room as they used to have, books are well organized by genre and author, despite the stacks of overflow on the floor in every aisle. Used paperback books sell for 60% of their cover price. That’s more than I charge for them at my bookstore (typically, I sell a paperback originally priced at $7.99 for $3), but then (1) used mass market paperback books are not the focus of my business, and anyway, (2) more power to the bookseller who can sell at make-a-living prices! I overheard one book-buyer saying to the cashier, “You guys are great! Whenever I’m looking for a book, you have it. No one else does.” Happy customers! Those who bring in books receive store credit, too, as in my store, so they are not paying the full 60% standard price on used books.

I admit I splurged, spending over six dollars on a couple of thin paperback Easy Rawlins mysteries by Walter Mosley, one of my favorite writers. They were the first two in the series, however, and I can’t afford to treat myself to first editions; besides, it always feels good to support another independent bookseller. 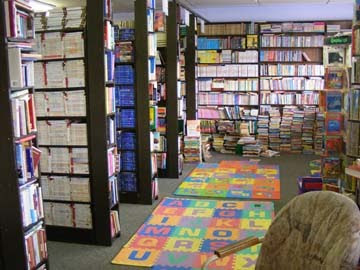 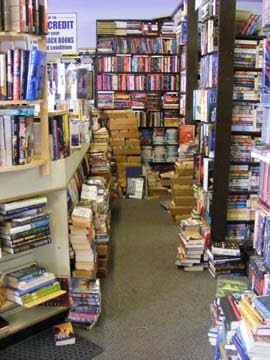 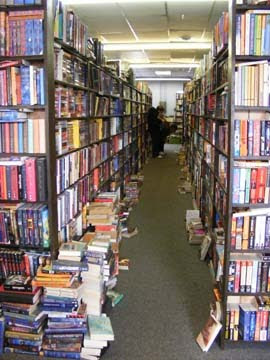 Lots and lots of books and a very friendly staff person to answer our questions. All Book Market needs is another chair or two for browsers with tired feet!

“Northport seems very empty when there are no lights at Dog Ears,” one friend e-mailed me from home. I’m sorry, Susan, but thank you for a message that warmed my heart.

Both nights at my mother’s house I read myself to sleep with one of her library books, a large-print edition of one of Janet Evanovich’s Stephanie Plum series. Evanovich has been popular for years now, and I’d somehow never read one of her books. Descriptions of the protagonist started me musing on why women would love this character. Stephanie Plum is young, single and sexy. She doesn’t make a lot of money, but except for “mooching” from her parents’ refrigerator when times are lean she is financially independent. Her interest in cooking is nonexistent: she lives on peanut butter sandwiches, disdaining “health food” as much as gourmet meals. In other words, Plum is the antithesis of the successful American woman who “has it all” and the stress that goes with it all. In contrast, her life is simple--not easy, but simple. But the complications of her life aren’t part of her readers’ lives, either: adventure, danger, bloody murder and multiple sexual possibilities. Pure escape! Okay, I get it. 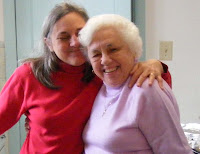 Naturally, being with my mother is the best part of being in Joliet, Illinois--better than the best bookstore on earth!
Posted by P. J. Grath at 3:42 PM

(What a great way to start a vacation! Spend it mooching from Mom's refrigerator and wandering around in a bookstore! Stephanie would be proud. I confess that's pretty much how I spent my vacation too, except the store sold excellent treats and the smiling woman was my sister Mary.)

All right, Gerry, you asked for it: my mother sent us off with chocolate brownies AND chocolate fudge! I'll be posting later about our the books we read aloud to each other in the car. Well, read from--we are three chapters into one of them, and the other one (also excellent) moves more slowly. There is, after all, a lot to look at along the road.

Look at all those books!! I am impressed with all your bookstore stops as you travel slowly down to Florida.

Oh my goodness, how did I miss the pic of you and your mother? This is wonderful!