Before the President Spoke 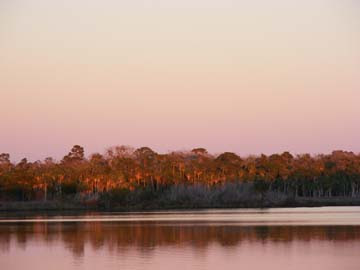 On Wednesday afternoon I baked bread, and then we had an early dinner before walking to the bridge for sunset, which was as lovely in the east (see above) as in the west. Back at the house, with two and a half hours before the president’s State of the Union address, I picked up a book bought at Sunday’s flea market in Homosassa Springs. The woman bookseller had cast a charming spell on me when first I entered her large, roomy store and saw her sitting at the counter, pencil in hand, drawing a picture (“I’m trying to teach myself to draw,” she said), 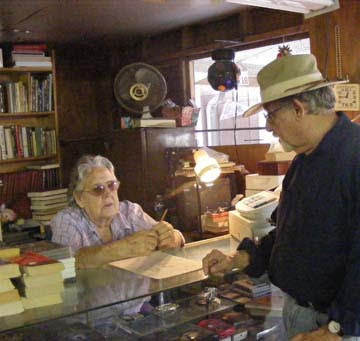 but the book, The Extremists: Gadflies of American Society, by Jules Archer, had an appeal of its own. Published in 1969, it covers “extremism,” whether from the Right, from the Left, from unruly mobs, Congress, the courts or the White House, in all of American history from Puritan times through the 1960’s. I couldn’t resist.

I’m always fascinated when I hear anyone say, “Our nation has never been as divided as it is today” or “Civility has disappeared from ‘civil society’ in this country.” When I hear a remark about Americans being more divided today than ever before—or even “more than I’ve ever seen in my lifetime”—I immediately think of the Vietnam War era. More now than then? More, say, in 2008 than in 1968? I don’t know how to compare “now” with “then,” having been so very much younger then. As for the feelings of people in this country before my lifetime or a century or two before, there’s a real mystery. We’ve all studied the politics and the wars of our nation’s history, but what went on between Americans who disagreed? That’s the subject of Jules Archer’s book.

Roger Williams, who challenged the Puritans’ laws obligating support for and attendance in their church, is my new historical American hero. Williams established the colony of Rhode Island, where “Colonists of any persuasion were welcomed—Protestants, Catholics, Quakers, Jews and atheists,” but not before he was threatened with deportation back to England by the Puritan Fathers. Williams also took both England and American colonists to task for stealing land from the Native Americans. He was an “extremist,” according to Archer, but so, Archer says, were the Puritans. “Time and history prove many extremist groups to be wrong in their ideas or tactics or both,” he notes. “But others become esteemed....”

The wrangles between supporters of Samuel Adams versus Thomas Jefferson foreshadow, for me, struggles that are still part of American society, with Jefferson as the liberal, the believer in democracy and opponent of the Jay Treaty and the Alien and Sedition Acts (the “Patriot Act” of the 18th century) and Adams looking to strengthen the federal government, protect it from spies and a French-style Reign of Terror by setting up harsh penalties at home and a newly forged alliance with England. Political fears were so heightened at this period that when Jefferson was elected president, an extremist conspiracy was formed to set up a separate nation under new government, the “Northern Confederacy of New England and New York.” It didn’t get far, but when was the last time we worried that part of our country was going to break away and declare its independence?

Unpopular wars are nothing new. The War of 1812 was rammed through Congress by “War Hawks” who hoped that by defeating England a second time, the United States could expand its territory, but two states refused to send members of their state militia to fight in the war, Federalist merchants wouldn’t buy war bonds, and a mob in Boston actually killed an American general. The war was brought to a spluttering close when New England threatened secession if it went on. Another threat of secession and a general dead at the hands of a mob!

People worry about party crashers at the White House, but how about Andrew Jackson’s inaugural ball, where crashers numbered in the thousands?

Standing on costly damask-covered chairs with muddy boots, they cheered their hero wildly. Many rushed forward to pump his hand, elbowing the rich and fashionable to one side. People shoved, scrambled, fought, romped. Women fainted, men got bloody noses; clothing was torn; expensive glass and china went splintering against walls and floors. A dazed Daniel Webster stammered, “I never saw anything like it before!”

The mob had to be lured out to the White House lawn with punch (presumably alcoholic) enough for 20,000 people.

And so it goes, on and on, decade after decade. The rich get richer, and the poor get pissed. Attempts are made to correct abuses of power, and those in power panic and clutch more tightly at the reins. One religious group or another tries to impose its views on the whole country, or times get tough economically and a religious group or race or group of immigrants (any of these may be plural rather than singular) is targeted as the scapegoat. Whatever the divisive issues, voices are raised, fists shaken, families at odds with each other, angry letters to the editor written and published, and sometimes there are fatalities, as lines separating friend and enemy are drawn, erased and redrawn. Still, like contestants in a “three-legged” race, we struggle to go forward together, because so much is at stake and forward is the only direction possible.

For a reflection on “extremism” in a recent controversy, see Benjamin Busch’s remarks for National Public Radio. I wrote about Busch’s essay “Growth Rings” (on books and trees, not politics) in this blog earlier in the month. A friend of his found the post and forwarded a link to Ben, who got in touch with me last week, and it was delightful to hear from him. I was also happy to learn that he and his family live not all that far from Traverse City, over in Reed City in the middle of Michigan, and that Ben is willing to come to Northport to do a reading at Dog Ears Books in the spring. Another event to anticipate back home in Michigan!

Future of bookselling? Future of our country? Onward and upward, my friends! But in the picture below, don't look for the moon in the sky. See it reflected in the water? 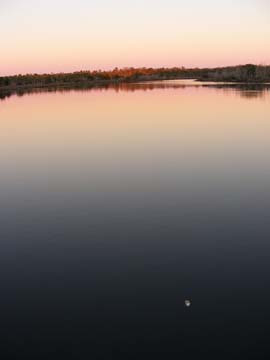 The bread looks wonderful, as does the bookseller with the pencil. Teaching herself to draw of all things! I'll bet most times have been just as contentious...we're probably simply thinking our time is the worse...

Good point. I thought of things other than the domestic struggle over the Vietnam war in terms of making the modern claim of "Our nation has never been as divided as it is today”

Have those make the claim ever heard of the Civil War? That's the 8000 gorilla of the breakdown in civility in a nation (even looking at all history) if ever there was one. Beyond that, I thought of the urban riots of the 1960s, and the deadly draft riots much earlier.

Thanks for the perspective. It makes me feel a little more hopeful that we can somehow progress and create meaningful change. I had this reaction when I read the John Adams bio--those guys were really vicious in their attacks upon one another.

Great news about the Busch reading!

It wasn't only the Civil War or Vietnam, either. Besides the war of 1812, there was the war against Mexico and one against Cuba--many wars of American aggression opposed by segments of American society and promoted by others. Between wars there was plenty of social strife: anti-immigrant hysteria; fears of conspiracies by Catholics, Jews, Masons, etc.,; unions vs. employers; and on and on. We always been a society struggling for unity, held together by laws, ideals, hope and geography.

And now, apropos history, I hear that Howard Zinn has died.