"Tragedy of the Commons" Revisited 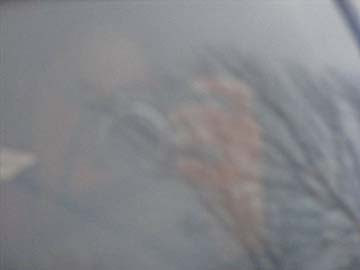 That's me yesterday, on a trip to Traverse City to visit a doctor and a friend in the hospital. We didn't stop along the roadside, but I did take a few photographs from the moving car as David drove along, including this one of myself with camera, seen through the window in the rear-view mirror.

I wake at odd hours, and my mind begins to churn, unbidden. I would choose otherwise if I could. Under warm covers in the frigid northern Michigan winter, who wants to be dragged from the charms and comforts of sleep? But I wake and finally, more and more wakeful, give up hope of sleep and get up to read or write or make coffee. This morning I got up and began folding laundry before anything else. What possessed me? Thought. Reflection. 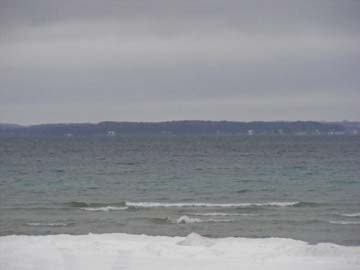 The “Tragedy of the Commons” scenario in a nutshell, outlined by Garrett Hardin in his article first published in Science magazine in 1968, was that common grazing land, available to any and all for use, will be overgrazed because it is in the interest of individual cattle owners to graze more and more cattle and enrich themselves at the expense of the common resource. But Hardin was using the “Commons” and its plight as a metaphor. His concern was human population control, his point that, being free to reproduce at will, mankind was bound to exceed in time the earth’s “carrying capacity.” Thus for him the “Commons” was the earth itself, with all of its finite resources. How can we live within the earth’s capacity to carry us? Hardin argued against the “freedom to breed”--hardly a libertarian conclusion!

Unfortunately, the key phrase and image in Hardin’s essay has been kidnapped, lifted out of his context and is often casually referred to in support of a very different conclusion, i.e., that resources are better husbanded when held in private hands rather than in common. In the kidnapped version of the argument, the original metaphorical nature of the example is completely overlooked, and nowhere addressed in the oversimplified scenario is the question of regulation. The absence of regulation is not remarked in the use of the commons; the need for regulation is therefore not addressed in the use of resources privately held. (For a general discussion of the original argument and offshoots, see here.) This kidnapped version has done and continues to do a huge disservice to natural resource issues.

Hardin did not conclude that private ownership of resources is the best safeguard of those resources. In fact, the section of his paper that lays out the Commons metaphor is entitled in full “The Tragedy of Freedom in a Commons” (my emphasis), hardly a libertarian statement! Here is the way he saw private ownership of natural resources:

The tragedy of the commons as a food basket is averted by private property, or something formally like it. But the air and waters surrounding us cannot readily be fenced, and so the tragedy of the commons as a cesspool must be prevented by different means, by coercive laws or taxing devices that make it cheaper for the polluter to treat his pollutants than to discharge them untreated. We have not progressed as far with the solution of this problem as we have with the first. Indeed, our particular concept of private property, which deters us from exhausting the positive resources of the earth, favors pollution [my emphasis added]. The owner of a factory on the bank of a stream--whose property extends to the middle of the stream, often has difficulty seeing why it is not his natural right to muddy the waters flowing past his door. The law, always behind the times, requires elaborate stitching and fitting to adapt it to this newly perceived aspect of the commons.

There are two problems with the general economic picture of private ownership of resources as presented in the kidnapped argument: (1) Profit-maximizing individuals and corporations in “civilized” societies guard their wealth, not necessarily resources, even if they own those resources. If the resource (human, animal, vegetable or mineral) is cheap enough, the owner will gladly lay it waste to gain what has a higher price in the marketplace. (2) Wealth is always measured in the short term of a human lifetime. Individuals are born, live and die; corporations are formed and dissolved. Nothing can force private owners of resources to care about succeeding generations if they lack that concern. In fact, these are the same problems that occur with resources held in common. It is not, therefore, ownership of resources that determines whether they will be used widely or laid waste.

Consider an example: A mining company may buy the land from which the company owners wish to extract minerals. Often such lands are very marginal for agriculture; poor land means poor people in need of jobs; the necessary mining technology requires capital not available to local people. For all these reasons, the land is cheap. The company is free to hire, the workers free to take the jobs or leave them. Everyone’s short-term interest is clear. The company can extract the minerals, produce wealth for its shareholders, and leave behind lakes and streams poisoned for generations to come. Neither the self-interest of the owners nor that of the workers, because measured in the short term, protected the water or the land or the future of local residents.

To repeat: it is not common ownership or common use that destroys resources. Resources are destroyed by lack of regulatory safeguards on their use, whether by public or private interests. This is the true lesson of the Commons. 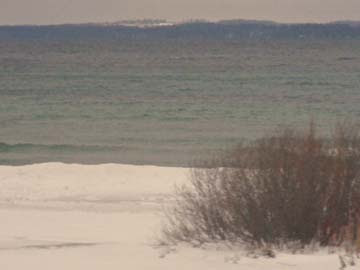 In his original article, Hardin quoted Alfred North Whitehead: "The essence of dramatic tragedy is not unhappiness. It resides in the solemnity of the remorseless working of things." Hardin’s conclusion was that there was no technological solution for the problem of overpopulation and that only changes in ethics and law would do the job. I am not taking up his argument for legislated population control but only the more limited argument for regulation of natural resource use. Even that much of the “remorseless workings of things” seems to escape far too many people, those who believe government is always the enemy and freedom should be absolute, that all public resources from water and forests to community libraries and schools should be “privatized,” i.e., sold off to the highest bidder. Now there’s a quick route to tragedy, for sure.

The friend I visited yesterday in ICU died this morning, I have just learned. Here is yet another reminder of the brevity and uncertainty of each person's tenure on earth and importance of not putting off until "tomorrow," which may not come, the important things we want to say and do while we are here. 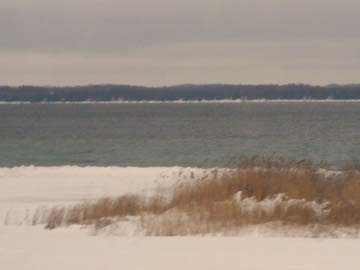 In the bleak midwinter, eh? I am sorry for the death of your friend. It's hard, such a loss. I'm glad you were able to be there yesterday, offering the best one person can to another--loving presence at the hard times.

The death of a friend is always so difficult. I'm glad you got there in time. That truly is a gift.

I need to reread this post, as so much of it seemed to relate to my fight with the trucking industry..and yes I realize that has nothing to do with what you or the author were really discussing..but there seemed so many parallels...that I need to reread and think.

Dawn, you've got me very curious about your "fight with the trucking industry." I'd be interested in the parallels you see with Hardin's argument.

Thoughtful analysis. A similar argument is made by Robert Reich in Supercapitalism. The idea that "corporations" are expected to be good "citizens" being at odds with their #1 goal: increase wealth of owners. I really liked his book.

Sorry about your friend.

Thanks, Karen. I understand (at least in part) the legal motivation for granting "personhood" to corporations, but IMO that "personhood" should be limited, not placed on a par with actual persons, as if a corporation could ever be a human being. Treating corporations as human beings with the same rights is as bad as allowing patenting of genetic material. Two enormous cans of worms were opened with those decisions, and it's hard to see how the worms could ever be put safely back into the cans and the cans resealed.

I'm thinking of Ken Burns' "National Parks, Americas Best Idea" series and the recurring issues / struggles of obtaining the lands (and holding on to them) and how that fits with this. Many examples of the fights between commercialization / privatization vs. preserving for nature / all people / the future. And what happens when we lose.

Maybe I'll get to see that series on DVD. Saw part of the first episode while visiting family in Minnesota. Anyway, Bill, did you know that David used to have a house down in what is now Sleeping Bear National Lakeshore? When the park came in, he was upset at first, as were many people. Now when we drive down to where his house used to be, the memories of it are still there without any rancor. It is so lovely--the meadows, the woods, the beach! On one of our visits, David blessed the park, saying, "Without it, this would all be condos." And wouldn't that have been a shame?

P.J. I'm still thinking about this. It's hard to put my finger on it exactly, but it has something to do with the common highways being used to increase the wealth of the trucking industry at the expense of the lives of others that appear to be just considered a cost of doing business. That's not the eloquent parallel I'd like to express but I'm struggling with the exact nuance. Each time I read your entry I feel that connection, it speaks to me, but it's likely because I'm so involved in the safer highways movement. My Dad was killed by a tired trucker 12/23/04. I'm now on the board of Truck Safety Coalition. See more about us at http://www.trucksafety.org/

Dawn, I'm sorry to hear about your dad. My own father was a railroader (as were his father and two uncles), working as head of a survey department and also serving on railway safety committees. When I was growing up, I heard a lot about the economic competition between trucks and trains carrying freight. Railroads had to build and maintain their own tracks; trucks do pay higher taxes when they buy fuel, but the trucking companies have no building or maintenance responsibilities. While my dad was involved in railroad safety, and my mother was photographed for the rr newsletter wearing one of the first car seatbelts, I don't remember discussions of the kind you suggest, but I do see the connection you're going for.