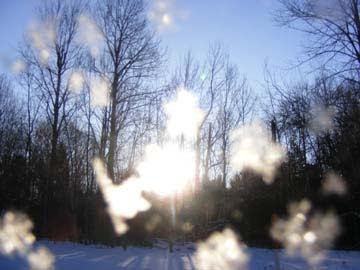 Above: sun through frost stars on passenger side window as we head to Northport to retrieve our mail. David driving, on a mission, no time to stop for photography along the way. The house is pandemonium, stacks of maps, books, clothes and other necessities everywhere, and while I'm over halfway through The Gargoyle, my thoughts about it are not organized enough to share, except to note that I'm still struggling over my Hobbit Barrier (personal problems with medieval fantasy) to stay with this book.

A different book arrived yesterday in the mail and hopped to the top of our trip reading list. The title slips my mind at the moment, but it's a travel memoir by a young man in about 1930, exploring an island--maybe in the Bahamas?--and should serve a delightful antidote for the frozen landscape we'll be traversing on our way to Illinois tomorrow.

And though I only said good-by to James Joyce the other day, I'm bringing him back onstage for another bow. Below are the excerpts Steve chose for us to read aloud at our last meeting.

The sun is shining, the world is bright, and this is my true 600th post. I discovered after announcing the 600th yesterday that it was only the 599th. Better to reach a milestone on a sunny day, anyway, in my book. 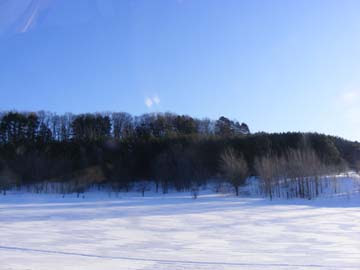 Please excuse the formatting of the excerpts. I'm not sure what happened.

Are you off to Florida tomorrow? Or is that today? Hopefully you will enjoy a wonderful safe trip and report to us when you're settled. (Or sooner if you have a laptop and inclination!) Love the sun through the frost spots. Looks like you succeeded even though David's mission prevented more leisurely photography.

Looking at your list of books to possibly read is always inspiring. Do you find you have more or less time to read when you get to Florida and aren't busy in the store?

Almost everything is better on a lovely sunny day in winter. Happy 600th Anniversary! ("Sounds like something one might read in The Hobbit, doesn't it?" she asked, grinning wickedly.)

Kathy and Gerry, hi! We'll be off in the morning, and by then I should have finished THE GARGOYLE, with its (get this, Gerry!) supposedly 700-year-old characters. The book I'll read to David in the car is INAGUA: AN ISLAND SOJOURN, by Gilbert C. Klingel, republished (1947; republished by Lyons & Burford, 1997) in the "Wilder Places" series, all books in the series chosen and introduced by Stephen J. Bodio. Inagua "is the name of a very lonely and nearly forgotten island." Between the Introduction and Chapter I there is a map, drawn by hand, covering two facing pages.

Kathy, yes, I have a lot more reading time in Florida. For one thing, I am without the daily demands of my bookstore, which takes a lot of mental energy as well as time. For another thing, we don't have much social life there. It's mostly David and me and the dog. We take walks, go to the library, visit the dog park (and talk to friendly people there) but do a lot of staying home, reading, writing, painting (David) and drawing (me). The pace is completely different from our Michigan life.

Gerry, do think seriously about getting together a group to read ULYSSES, with someone knowledgeable and energetic to organize readings and meetings. I cannot overstate the difference this makes!

I've read through those Ulysses excerpts several times now. They really show Joyce's humor and versatilty. What a mind! What fun we had. I'm reading Gargantua and Pantagruel (some in french, most in english). The introduction compares Rabelais to Joyce. I suspected that Joyce got some ideas from Francois. They are kindred spirits. I hope that you and David have a great time in Florida.

Hi, Mr. G! You weren't kidding about GARGANTUA ET PANTAGRUEL! We read part of it in h.s. French, but do I remember anything? Nothing! Do you recommend an adult re-reading?

We are in Joliet, Illinois, visiting my mother for a couple of days. It is even colder here than it was in Northport! Lots of snow, a fair amount of sunshine, frigid wind across the prairie. Strange at night: no dark sky. So much ambient light, impossible to see stars. But very good to see and be with my mom.