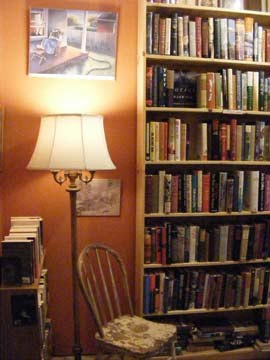 I wrote 239 posts to “Books in Northport” in 2009, for a total of 592 posts since the blog’s inception in late 2007. The “Books Read” feature of the 2009 blog was new and shows that over the 12-month period I read 110 books, from Paul Auster’s Timbuktu in January to Barbara Kingsolver’s The Poisonwood Bible, finished on the late afternoon of New Year’s Eve. Only one book “read” was an audio book, though half a dozen or so were young adult novels—admittedly quick reads. On the other hand, at least three were books I read in French, i.e., much more slowly. (Le rouge et le noir and Le conte de Monte-Cristo, along with Joyce’s Ulysses, occupied me for many weeks each.) All told, my average of slightly more than two books a week for 2009 is very much an average, rather than an accurate picture of any particular seven days. 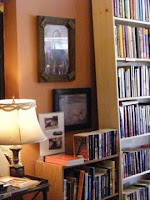 When I look back over the year’s list of titles and authors, I remember all the places to which I was transported by the magic of books. Writing from an old farmhouse or a small village in northern Michigan (for a while from an even smaller village on Florida’s sawgrass Gulf Coast), I hope I was occasionally able to convey the journeys of imagination that took me across oceans and continents. Thanks to books, I slept in a cave in France, walked a beach in Dublin, made my gliding way through the Everglades, padded cautiously along a beaten, red earth path in the Congo, flew over the mountains of Afghanistan and explored hilltop villages in China. I became by turns a child and an old monk, a soldier, a vintner, a lawyer, a falconer, Jewish and Muslim, a scholar and an illiterate peasant. The world was by turns a horror, a miracle, a game, an impossible tangle. With one time machine after another, I moved back and forth through the centuries. Some of these literary travels are recorded in posts, others only in the bare list of “Books Read 2009.” 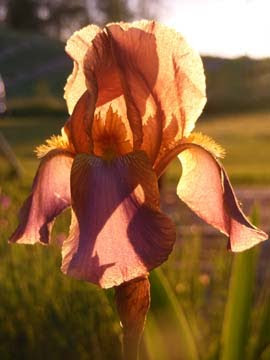 If I had to choose a single month of blog posts from 2009 as my favorite, it would probably be October. The first four months of the year incorporated travel and scenery “exotic” to my northern eyes (though native in the habitats where it occurred), and those are precious memories, as are those of September travels to the Upper Peninsula and through Wisconsin to Minnesota. The month of May, near home, is perhaps the most beautiful to see “close up,” with all the woodland wildflowers in bloom. But the heart-breaking loveliness of autumn in my corner of the world, along with books I read and reviewed that month—well, it’s a close call, May or October. Perhaps I choose October from the vantage point of winter because it’s closer to me in memory.

A question I’ve contemplated recently, since our small domestic pack of three will soon undertake the seasonal migration, cutting our winter financial losses by heading for the sun, is whether or not I should begin a completely new blog for the months away, something with a more appropriate title, such as “Books on the Road.” There is, however, the precedent of last winter, with no title change, on top of the element of confusion such a change could introduce. In the end, then, I have decided to stick with “Books in Northport” again this winter, even for my posts from Florida and intermediate states.

How I can make a public appeal to county residents to shop locally and then close my store for three months calls for some explanation, as does how a struggling bookseller and her artist husband can afford three months in the sun. The answers to these two questions are interrelated. As my business landlord of a decade remarked to me once from the storehouse of his own experience and wisdom, “The key to a seasonal business is to keep it seasonal.” For several years I thought I knew better. I resisted that “seasonal business” designation. After all, I was operating a bookstore, not a fudge shop or an ice cream stand! It turns out that the difference doesn’t make a difference, because Northport does not get winter tourists, and Northport’s population shrinks drastically in the winter, and people are not going to drive out from Traverse City in February in search of books. Then there are winter heating bills, at home and for the shop, and the business of plowing a long driveway to get from home to shop to turn up the heat and turn on the lights and wait and wait and wait for business that doesn’t materialize. No, no. My hope of building a winter clientele was naive and finally gave way. Closing for the winter is one of the strategies that keeps me in business. Dog Ears Books is in its 17th year in part because seasonal closings keep the business viable.

Obviously, cutting our losses can’t be the whole story, though, and it isn’t. The other part is good friends who provide our winter refuge in Florida. Thanks to their generosity, we have a warm, snow- and ice-free place to live and work, read and write, and paint and ponder and recharge our aging batteries so that we can come back eager for another season, full of hope and energy and ideas and plans.

My new year opens on necessary tasks to be completed before departure, but along with bookkeeping and such (the dull stuff) I am already reading reviews of new books and making lists of what I want to read and review and order for my bookstore in the spring. Delightful! “I envy you!” someone said recently. Sometimes that envy seems terribly misplaced--others know not the dark nights of my soul!--and other times I envy myself, still marveling that this good life is, for now, mine to live.

As I came into being a short while ago, as a consequence of the most improbable concatenation of coincidences over ages and ages of time, so in a short while I shall cease to exist.... My eyes will open for the last time; my heart will beat for the one last time; I shall taste my last drop forever; and the loves and hates, pain and rejoicing, all that belonged to my life, will be efaced once and for all, as though they had never been.

I don't intend to sound morbid in choosing that quotation to open a new year. Instead, it is an invitation to meditation, to myself and others. One more year of our lives is past. How will we treat what remains to us of our brief time? 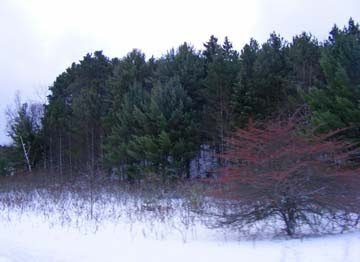 What a lovely thoughtful post as you prepare to head south. I feel like I can relate to your questions and soul-searching about starting another blog versus sticking with this original one. It will be good to read your comments and see your photographs from Florida.

It is such an interesting point about envy. I think I have envied so many people--not in the sense of wanting to BE them necessarily or to experience their dark nights of the soul. (And haven't most of us had them?) But to experience some of the magnificent experiences...to vicariously own an independent bookstore in northern Michigan and travel to Florida during the cold winter months. Ahhh...it sounds so delicious. That feels like the envy part. I sometimes want to be every one in the universe. (minus those dark nighs, which...sigh...probably can't be separated.)

This is one of the many reasons I love books, Kathy. They let me have many different vicarious lives. Blogs do the same thing, and I lived many of your life adventures vicariously in 2009. Happy new year!

I'm glad you're going to post to Dog Ears from Florida, PJ. I swear, it's hard to keep up with all the changes in people's lives.

Miss Sadie, the Cowboy and I - and Miss Puss when she is awake - will keep the home fires burning while you are away.

Oh, good god, Gerry, I cannot even begin to fathom what it would be like to read ULYSSES in French! No, that one was in English. I changed the order of those three books (what they had in common was that the reading of them was spread out over a long time period) to eliminate confusion but guess I should have put them in different sentences altogether.

Are you home from your holiday travels? Hope all went smoothly and happily.

As for our time in the South, I know it will be fine when we get there. It's this transition period that has so many bumps in the road.

A lovely reflection. I'm envious, too, esp of all the books read! Loved the Poisonwood Bible. When I had my Aussie blog, Dispatches From Downuner, and returned here for 2 summers, I posted to the same blog as well. Why should we limit ourselves to one theme or place per blog! I love the thought of envying yourself. I have that feeling many times. And it gets me through the dark nights.

Karen, it already seems strange that I didn't know you until this past year and missed your blog from Australia. But now I will be able to keep in touch with you over the winter through your (Michigan) blog we well as mine. Have you gotten together with your neighbor Ilene yet? I think you two could be good reading-and-writing friends.

Thanks for the good wishes. I wish you a good, healthy, enjoyable and productive winter in Northport.

Have a safe trip to Florida now that the shop is closed up for the winter. It can take a nice nap and reopen in the spring renewed! At least that's what I'd like to think a napping bookstore would do...Can't wait to see some pictures of beach and sun! Enjoy!

Brook Stableford said...
This comment has been removed by a blog administrator.
January 6, 2010 at 10:43 AM