Off the Main Road 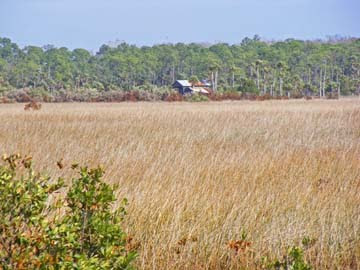 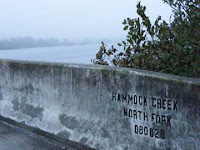 Far south of the Panhandle and north of Tampa Bay, Hernando and Pasco Counties are sawgrass coast. Near where we are staying there are four man-made recreation beaches, but the natural shore is deeply permeable, with tides rising and falling daily through sawgrass and mangroves. Aripeka (“little Aripeka,” people say fondly) straddles the county line. Its post office, once in Hernando County, is now south of the South Fork of Hammock Creek in Pasco. Except for the bridges, Aripeka’s elevation above sea level is about three feet, and heavy overnight rain turns the narrow two-lane highway into a series of temporary small lakes. 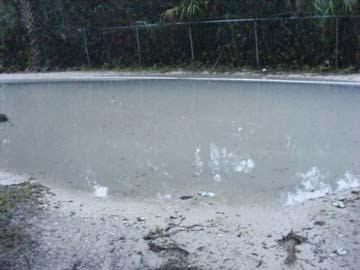 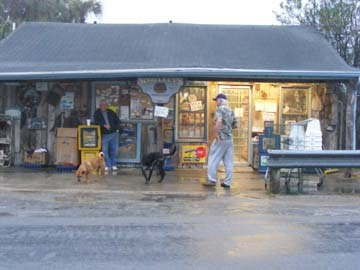 It’s a quiet place to wake up on a misty January morning. Do you see the two dogs? The black one is Weiser, the tan one Ida. Sarah's playmates in Aripeka, here they are freeloading at Carl Norfleet's general store.

Hernando Beach north of here and Hudson a few miles south were “developed” when speculators discovered this stretch of coast. Canals were dug and narrow mobile home lots laid out in Hudson, larger home lots (later) in Hernando Beach. Hammock Creek has always been too shallow for deep-draft boats, and development tends to occur where wider rivers empty into the Gulf, so Aripeka has remained a sleepy place, a pocket of old Florida. There are a few big, expensive houses but no condos. The atmosphere would change radically if the huge Sun West property were to be developed, but real estate isn’t what it used to be in Florida, so that might not happen for a long time, if ever. Smaller controversies erupt over the possibility of less radical change: so far, all the big box stores are out on Hwy. 19, the highway and the little fishing village maintaining up to now their very distinct characters.

As for my reading, I'm about three-quarters of the way through the Temple Grandin book and learning so much I feel almost dizzy. Too much to say about that to get into today, however. Next time! Also just started into a book on watercolor painting, not because I plan to get into that but because it's so charmingly written and some of it, I'm sure, will carry over into drawing. 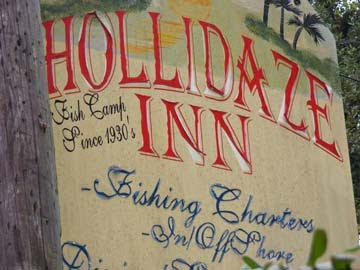 Have you read Killing Mister Watson by Peter Matthiessen? Your description of the sawgrass & mangrove coast reminded me of that book, which was a fascinating tale of early Florida and its cast of characters.

I read about the controversy with interest. Sometimes I think tiny little communities with character should simply incorporate themselves as museums and charge admission to visitors who want to see what life in a particular place was like before it became homogenized . . .

It would be a shame if all of Old Florida disappeared, just as it would if all of Up North vanished.

Karen, I read KILLING MISTER WATSON several years ago before my first trip to Florida since I was a teen. It was particularly fascinating because that trip our destination was Everglades City, and we visited Chokoloskee Island (sp?), where the store is where Mr. Watson was killed! I can't say I was sorry to see the end of him in the book.

Gerry, have I mentioned that Weeki Wachee Springs is now a Florida State Park? There never was a real town there, though it appears on the map as if there is one. Somehow turning a town into a theme park doesn't do it for me. How would it be "preserved" if its character were to be so completely changed by being frozen? Besides, the real characters aren't necessarily what park visitors would be looking to see. I'm just going to cross my fingers for Aripeka and Northport and hope they survive with their souls intact.