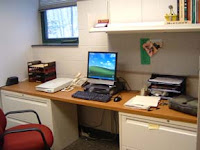 Yesterday’s Arctic blasts were so brutal even the pup didn’t want to play outdoors long. We made brief, utilitarian sorties and returned hastily to shelter. Would classes be cancelled for Monday morning? That was my Sunday night question. This morning the wind was still whipping, snow still gusting, and road visibility highly problematic out here in the county, but the semester marched on, albeit with high absenteeism. David (my hero!) piloted me safely through the dark, and I was happy to reach the haven of my clean, bright little office with plenty of time to spare before class. This office is my one serious perk this semester, and I'm appreciating the dickens out of it. It may never happen again!

A friend remarked the other day that he sensed an almost superstitious bias against science abroad in the land. Okay, he may not have used the word “superstitious,” and he certainly did not say “abroad in the land,” but I’m not a reporter, I’m not presenting my friend’s remark as a direct quote, and I do not think I have misrepresented his meaning. Is there such a bias? In some quarters, certainly, and loud voices come from those quarters. I doubt it is the general public sentiment.

On the other hand, I told my friend, I think the reaction that does exist against science is in part a reaction to what philosophers call “scientism,” a view that would make of science another religion. In the scientistic (a fundamentalist view opposed to the legitimately scientific) worldview, science is the only valuable and meaningful human endeavor, and nothing else deserves to be called knowledge. There is science, and there is superstition, according to this narrow perspective. Superstition here is a straw man designed to stand in for anyone working in the arts or humanities, let alone the “vineyards of the Lord.” (Another friend, an artist, shocked me a couple weeks ago by declaring, “If I can’t see it, it doesn’t exist!” Really? Whose side is she on?)

So, can an intelligent person--not by putting on blinders or sticking his head in the sand but sincerely and honestly--follow both science and religion? Religious and scientistic fundamentalists say no, while less strident American voices have sought a way to reconcile the two paths. I say “American” because, as Stephen Jay Gould pointed out, intellectuals in other countries seem not to be troubled by any irresolvable conflict in the first place.

Gould’s own solution was that science and religion are two distinct “nonoverlapping magisteria” (magisterium = teaching authority) and do not conflict because their spheres, or domains, are so very different: “The lack of conflict between science and religion arises from a lack of overlap between their respective domains of professional expertise—science in the empirical constitution of the universe, and religion in the search for proper ethical values and the spiritual meaning of our lives.” Gould no doubt agreed with Hume that there is no deriving ‘ought’ from ‘is’ and no logical path from fact to value. Science tells us how things work, religion how we should live, and neither is equipped to supplant the other.

A different and very interesting solution comes from Ken Wilber, someone whose work I initially approached with skepticism but have come to respect (if not adore--what is there about Gould, the agnostic scientist, writing usually on impersonal topics related to evolution, that seems so touching, so dear? Is this just me?). In THE MARRIAGE OF SENSE AND SOUL: INTEGRATING SCIENCE AND RELIGION, Wilbur divides knowledge into three fields—science, art and religion—and claims that all three depend on (the same) three essential aspects in their knowledge-building: (1) instrumental injunction (“If you want to know y, do x”); (2) direct apprehension of the data of experience; and (3) communal confirmation or rejection. As for reconciling science and religion, Wilber thinks each has to give a little to make way for the other, and what both have to give up (here is his second surprise move) are their respective myths. The mythologies of religions are obvious. The myth of science, Wilber says, is that it deals only with sensory data, but if this myth were true, there would be no mathematics and no scientific theories to test. The outlawed “interior” world of thought, concept, intentionality, etc. is essential to the scientific enterprise, however much it is denied official reality.

I have already written that I think Karen Armstrong is asking too much of human beings when she says they need to invent “new myths.” If I’m right about that, what are the odds that our species can dispense with myth altogether? Those are my doubts, but Wilber’s solution remains intriguing. To say that scientific experiment, religious contemplation, and aesthetic exploration are approaches to different aspects of human experience using identifiably similar methods—this is a brilliant synthesis, however few disciples it is able to win. It is also a relief from the disdain of atheistic and fundamentalist extremists who can see nothing but stupidity and evil in one another.

Gould's view and Wilber's, as far as I can see, do not rule each other out, either, but seem perfectly compatible. This is a relief to me. I would find it very difficult to give up Stephen Jay Gould.
Posted by P. J. Grath at 6:09 PM

I'm a big fan of Gould as well. He was a brutally logical man who maintained a sense of wonder about the world. This may be considered slumming in philosophy circles, but I quite enjoyed Plato Not Prozac: Applying Philosophy to Everyday Problems by Lou Marinoff.

Regarding science and religion, you might find these references & people interesting:
(1) Dr. Guy J. Consolmagno, S.J., one of the Vatican astronomers ( http://clavius.as.arizona.edu/vo/R1024/GConsolmagno.html )

He has some interesting perspectives on science and religion, and some of the problems with Creationism. I enjoyed watching/listening to him at the Boskone science fiction convention last year. I first encountered him via one of his books, Brother Astronomer: Adventures of a Vatican Scientist. He has a new book out that I haven't read yet, God's Mechanics: How Scientists and Engineers Make Sense of Religion

He spends most of his time trying to finish his magnum opus, The Art of Computer Programming, which he's been working on for several decades now (3 volumes "finished", volume 4 in progress, volume 5 (and possibly 6 and 7) still to come). Also playing the pipe organ he built at home, and lecturing occasionally. He collected one set of lectures into the book Things a Computer Scientist Rarely Talks About, in which he covers some religion topics.

Thanks for these book leads, Dorene and Walt. Yes, it's Gould's sense of wonder, I guess, that so appeals to me. Yesterday I had a bookstore visit from a friend who likes to rant on science, religiona and politics, and I tried to tell him of Wilber's interesting attempt to reconcile science and religion. He gave the book that dismissive, disdainful look, refusing to look into it, and said the project was impossible and ridiculous: "Science is rational, religion is irrational--end of story!" Hallmark of a scientific mind? Open to ideas? I ask you. And whatever one thinks, how can one not be fascinated by these reconciliation projects?