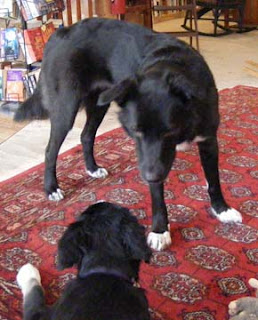 Yes, it’s Saturday, and Winter Carnival is only a week away! I haven’t heard many people expressing worry that we won’t have enough snow. The contrary, maybe. But if the Big One hits tomorrow, as predicted, people will have plenty of time to dig out and get to Braman Hill seven days from now.

Yesterday was an interesting day in the bookstore. Big Steve and David and I were discussing Rimbaud, and suddenly Steve began reciting several Rimbaud poems by heart, in French. We were impressed! It’s not the kind of scene that takes place every day in little Northport, especially in the dead of winter. Then along came Berkeley and Jen, with Sarah’s (so far) best dog friend, Kesey, and more familiar doggy fun crowded out poetry. (Steve, the dogs needed their social and physical exercise! We’ll get back to you on Rimbaud et al. soon!)

I must confess that I have not (yet) read any of Zadie Smith’s three novels, and maybe in light of that fact, the better part of valor would be to keep my mouth shut about the Willesden brouhaha, but where does valor stop and cowardice begin? Since the news broke, I’ve been surveying writer friends for their opinions, as well as reading online commentaries, and opinions are all over the map. The first reply to my query was this:

“I actually read Smith's letter on the blog yesterday and I just don't understand how in 2006 and 2007 they received a wealth of wonderful stories and suddenly the following year nothing was good enough. I've never heard of this as typically when contests ‘age’ the competition grows stiffer. I mean, a contest with no entry fee, no word count or theme requirements, no age or citizenship status requirements and a $5,000 prize is one to which seasoned and emerging writers alike flock. They did receive 850 entries. Maybe I'm missing the point. Judges are subjective, after all, but perhaps the nature of the undertaking tainted the result as the three initial judges appeared to be overwhelmed.”

Another correspondent had a very different view:

“On the other hand, reading the description of the process, it does sound like the readers tried hard to find ones they could agree were excellent. I just don't know. I do know there's a lot of really bad stuff out there. Once I helped with some screening of poems…, and I couldn't believe how desperately, sadly, comically bad most of the ones in my pile were.”

“What a disservice to other writers, to arrogantly refuse to grant a prize,” wrote one tough writer and sometime judge. “Seems she went a long, long way to get out of reading the stories she had agreed to judge. Not the first bit of arrogance from a writer.”

Well, there you have it. I guess it’s time for me to wrap up my reading of LIBBY (two hours this morning weren’t enough to get me to the end of the book, but not a single minute of the time felt ho-hum, so immediately gripping is this story, which I can hardly believe is a diary and not a novel, and if this parenthetical phrase gets any longer, I deserve--) and begin ON BEAUTY, the second of Smith’s three novels. An observation on Betty John’s edited version of her grandmother’s diary before I close this posting: one website called Libby’s story “plainly told,” and my eyebrows shot up. The suspense is killing me!
Posted by P. J. Grath at 10:38 AM