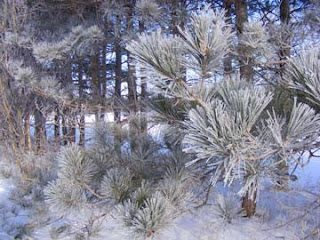 It was a magical, sparkly world out there this morning, one that I traveled with many starts and stops, even backtracking twice. We’ve had an entire week of (mostly) sunshine, and it’s done wonders for people’s spirits. If we change the elements of the game of “rock, paper, scissors” to "cold, light, precipitation," what would beat what? Some things need a period of cold, and there are spells in which we do “need rain,” but when is sunlight unwelcome?

But I promised that brain-twister that has my thinking thing knotted into a pretzel, so here’s the setup: There are three closed doors. Behind one of them is a big prize—say it’s a car—while there’s nothing behind the other two. You get to choose one door, and let’s say you choose Door A. What are your odds of winning the car? One in three, obviously. But all three doors are still closed. All is yet uncertainty and probability. You haven’t won yet.

Now your game show host opens Door C, and you learn that there was nothing behind it. Doors A (your first choice) and B are still closed, and behind one of them is the hot new car. Question to you: Are you better off sticking with your first choice or, when the host gives you the option, switching to Door B? Most people’s intuition is either to stick with A or that it makes no difference, since with only two choices (comparable to heads-or-tails), they reason, they have a 50/50 chance either way.

But probability experts who have worked on this problem say you’re better off switching. They say you initially had one in three odds (granted) but with one door eliminated, your original choice remains at one in three, while the unopened and unchosen door’s odds have jumped to two in three. Scream all you want. They’ll smile at you condescendingly.For a heated, lengthy explanation and discussion of this problem (ultimately humiliating for all the smart people now eating crow), take a look at Marilyn’s claim and subsequent shouting and murmuring.

Being very stubborn (just ask David), I can’t give up yet. Taking a new approach, I imagine a second contestant taking the place of the first at this point. The second contestant's choice is A or B, hence his odds (I think you’ll agree) 50/50. And now my question to the experts is, with two doors still closed, how can the odds be different for two different contestants? What I’m pushing for here (going way out on a limb I have no reason to dare to explore, given my history with math) is that maybe this problem presents a mathematical paradox, as opposed to truth vs. naïvete. But I’m over my head and need help on this one. Tom? Mark? Steve? Walt? ...Anyone?

Meanwhile, a friend out in Cherry Home (north of town), George Carpenter, writes about "Harbingers of Spring" he's noted in the last few days:

"Sunset on the far shore of Grand Traverse Bay (shadow covering the ridge across the bay from us) about 6:10 pm. Crows doing the 'aerial kiss,' both red bellied and hairy woodpeckers paired up (technically this is a partial cheat since they tend to stay in proximitity of each other year round), about 30 starlings back from the south, and an adult bald eagle carrying nesting material in his talons near Woolsey Airport. I probably shouldn't count the cut daffodils I bought today at Tom's because the label says they came from the UK."

Thank you, George, for that cheery report!

One last note on what I'm calling the paradox of the doors: When I said to David and Al, "Now suppose that Al steps out of the game and lets David take his place," David interrupted with a serious car-guy objection. "Why would he do that? Why would he give up his chance to win the car?" "For the sake of the problem!" I answered, and that made perfect sense to Al. Oh, we have fun here at Dog Ears Books!
Posted by P. J. Grath at 7:54 AM

Ahh, I have been struggling with this particular conundrum for years, and I have never been able to accept the logic that supposedly underpins the "correct" answer. I'll follow this thread in the hope of reading some posts from your circle of friendly experts that can perhaps shed some new light for me!

You should send this one to Click and Clack.

I’ll try once more to get this comment up, composing it somewhere else first and copying and pasting it so I don’t lose it a second time. (Grr-r-r, as my son would say.) Latest lesson on this problem from a young college man emphasizes—and you’d think this would have been obvious, but I was too focused on logic to remember that we were playing a rigged game—that the person who opens one of the doors does not do so at random. This is key. Because he knows that he’s opening a door with nothing behind it, and the original contestant realizes this, too, the two unchosen doors had a combined probability of 2/3, and that probability now transfers to the remaining door not chosen. If a new contestant is brought in at this point and never told there were originally two doors, he thinks he has a 50/50 chance whichever door he chooses because he lacks part of the information that would tell him something different, i.e., that one of those doors has a 1/3 chance, the other 2/3. I think I believe it now, thanks to this explanation by Ben Wetherbee.