Borrowing Cold from the Arctic 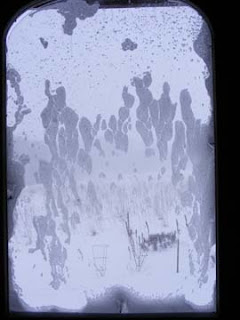 This picture, looking east through our woodshed window, is from last Sunday, a much colder, wilder day--though who knows what the rest of this Sunday will bring? Again today the wind is from the east, which always feels strange and wrong, and the last time I was outdoors, rain rather than snow wetted my face. East-facing surfaces of tree trunks were already covered with ice, and other objects in the yard, too, wearing a coat of ice like clear shellac. Gerry asked recently how I could read about the Arctic winter at this time of year, commenting that he’d save such books for August. No, it’s always in the coldest part of the year that I want to read about even colder places, but let’s see if I can make sense of that to anyone else.

After Sarah’s first sortie this morning (out into the cold and dark), I made coffee and settled back down with Libby Beaman’s diary. Up in the Pribilof Islands, Libby wrote on February 1, 1880, “The night and the cold have closed in about us…. Today is a warm day, eighteen below!” I read that, and my own winter seems much warmer and easier. Libby had been asked to teach school to the Aleut children, but in the second week of February, the parents asked that school be dismissed until “better weather” returned. “We had all been crawling [to school] on all fours against the winds. Now we cannot even do that, for our breath freezes in our lungs.” There was no daylight, and now there would be no change of scenery, no exchanging lamp-lit house for the lamp-lit school or store and the company of other human beings.

Three weeks later, harsh weather continuing, Libby reported that she and John had been unable to get down to the village at all, nor had anyone been able to get up to their house. “As the days pass in such blackness outside that it is difficult to note their passing, the temperature keeps dropping (today, twenty-eight below), and the ice-laden gales continue to rage around us at more than eighty miles an hour…. We look at each other and wonder how we ever got ourselves into this situation. It looks as though we are going to be housebound a long, long time.” Here in Leelanau County we are sometimes housebound for a day and the two nights book-ending that day, a spell of isolation that is luxury to me, not deprivation. I revel in a housebound winter Sunday. Weeks of isolation? Much less appealing, even in the abstract.

On March 20 Libby noted that their food and fuel were running dangerously low. They had restricted their living to the bedroom and were spending most of their time in bed, out of necessity, conserving and sharing body heat. She composed a letter to her family back home, knowing it would not reach them until August but wanting them to know, if she did not survive her Arctic winter, that she was happy to be with John. She also noted that she was craving dried prunes, a food she had used to reject but which now seemed to her “the ultimate of the unobtainable.” I reflect complacently on our supply of raisins and dark chocolate, honey and apple syrup, of fresh vegetables in the refrigerator and lentils soaking in a pot, and I am inspired to make a batch of cinnamon rolls for breakfast.

John and Libby were supposed to remain on St. Paul Island for two years, and I glance nervously at the diminishing number of pages left in the book. Libby’s letter to her parents closed with the assurance that “if we should not survive, someone will find this letter to you and all our other things. They will send them on, I know. You must know my love for you.” March 27: “We look at each other with a deeper fear in our eyes.” There was some daylight now in the middle of the day (no actual sun), but John and Libby were living on oatmeal and tea. We, by contrast, have tea, coffee, butter, eggs, rolled oats, steel-cut oats, rice, cornmeal, wheat flour, barley and more. They had given up trying to wash and were streaked with soot from the stove, the skin on their hands grimy and cracked. A week later, still no sign of life down in the village, and John was still unable to break through the ice to try to get to the village himself. They asked themselves what they would do if they were to reach the village and find conditions even worse there. “Better to perish here in each other’s arms,” Libby wrote fatalistically.

Why would I want to read such a hair-raising tale in May or August? When spring comes, all I want to do is soak in as much of it as possible, being as aware as I can be of every precious, fleeting moment. By August I’m anticipating a September get-away to the U.P., hoping the water in Sable Lake will still be warm enough for a swim. No, it’s now, when winter has us a bit ground-down, that I like to remind myself how easy we have it. If the worst ice storm were to knock out our power today, we would still have propane for our stoves and oil for our lamps. We would still be able to cook and to read, and we have plenty of food and plenty of books. I take warm comfort in that knowledge.

LIBBY: THE ALASKAN DIARIES OF LIBBY BEAMAN, 1879-1880, were edited and presented by her granddaughter, Betty John. There is much more to the book than winter isolation and hardship. Human relationships and conflict, the economics and harsh reality of seal “harvesting,” along with descriptions of seal life on these rocky, barren islands, make every page a fascination. This book reads so much like a novel that I kept closing it to look at the front and back covers, sure that it was a writer’s invention. Due for a reprint, I’d say.
Posted by P. J. Grath at 8:50 AM

Whatever it was you wrote and then deleted, Susan, thanks for the reminder to fill water containers tonight in case we lose power.