What David's Reading These Days 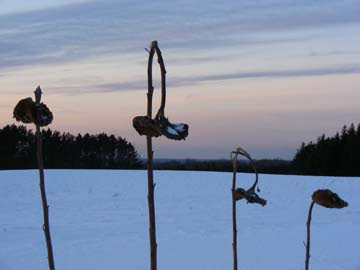 (Have I posted this sunflower picture before? That's Lake Michigan hazy in the center distance.)

Yes, tonight I’m turning the spotlight away from myself and the bookstore to shine on the books next to David’s reading chair. Top of the stack, the book he was reading last night, is THE SECRET LIFE OF THE SEINE, by Mort Rosenblum. I've been entertained with several long passages read aloud from that book, as well as long sections from KAFKA WAS THE RAGE: A GREENWICH VILLAGE MEMOIR, by Anatole Broyard. Paris and New York! The country mice, snug in their winter nest, dream of glamorous, faraway cities! HOUSE DREAMS, by Hugh Howard, is further down the stack, but I have neither read any of it nor had any of it read to me. Then there is a large-format, illustrated book by John Updike entitled STILL LOOKING: ESSAYS ON AMERICAN ART. That one I dipped into, turning one very early morning to an essay on Albert Pinkham Ryder called (the chapter title quotes the artist) “’Better Than Nature.’” Oh, that John Updike! How he can write! That he does is to the great benefit of the rest of us, and these essays on art and artists are of great interest of the painter in this household as well as the painter’s wife. We enjoy Updike’s poetry, too, and I think his IN THE BEAUTY OF THE LILIES an important and sorely neglected novel, deserving of a place in the top 100 of the 1900’s, expressing as it does the zeitgeist of that century.
Posted by P. J. Grath at 4:34 PM